Six years on from the global commodities crash and many junior and exploratory mining companies are still struggling to secure project investment. In fact, as noted in Fieldfisher’s recent Alternative Finance 2.0 report, many lower-tier miners missed out completely on the 2017 mining boom, despite a surge in demand for metals and minerals like copper, zinc, nickel, cobalt and lithium.

IPO activity all but stopped in 2020, as the investment community grew wary of the effects of COVID-19 on economies. No matter how deserving a business was of flotation, momentum was halted by concerns of when a ‘new normal’ of working patterns and trade would set in. Recently, sentiment has changed. Flotations picked up again during the second half of 2021, and now in 2022 the mood is decidedly optimistic. Business leaders have their eyes on fast rebounding economies, buoyant market indices and the opportunity once again to take their businesses public. As a result, global IPOs are expected to hit back this year. With GlobalData’s new whitepaper, ‘IPOs in Consumer and Retail: 5 must-include elements for your prospectus industry report’, you can explore exactly what is needed in the essential literature. GlobalData’s focus lies in the critical areas to get right: Interested to learn more about what to include in your IPO Industry Assessment report? Download our free whitepaper.
By GlobalData 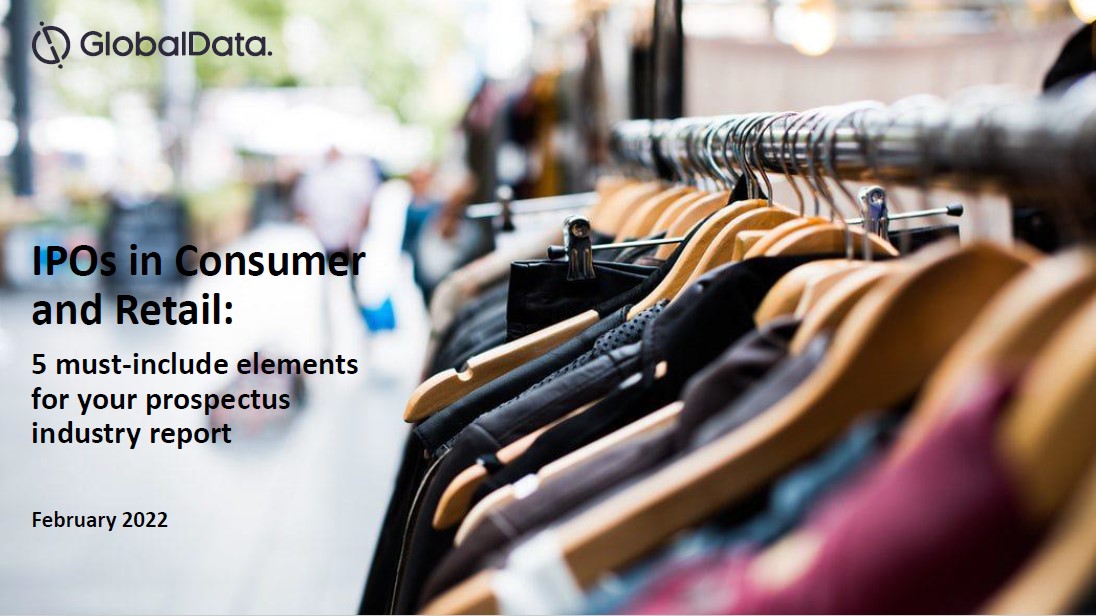 Yet the story was very different for the top 40 miners. In the same year, these companies recorded a 30% surge in their combined market caps to $926bn, delivering an 11% return on equity for the year, according to Pwc figures.

The continued weak confidence in junior and exploration mining firms is in part due to the increased competition from a raft of new investment opportunities, such as technology and cryptocurrencies, life sciences, and even the cannabis industry in North America, notes Fieldfisher.

As such, while seven or eight years ago the vast majority of mining deals used to be capital markets transactions, today alternative financing deals are increasingly the best option for cash-strapped miners. In fact, around half of the billion dollars of mining deals Fieldfisher conducted last year came from alternative sources.

Production-based financing – whereby companies secure cash by selling rights to receive future production from their mines – has become a common feature of the mining industry, particularly in connection with strategic metals such as lithium, nickel and cobalt.

NQ Minerals, for example, entered into an offtake agreement with Traxys Europe in July last year. For 100% of zinc and lead production from its Hellyer project in Tasmania, the company will receive $10m secured prepayment facility.

“It’s very helpful that off-takers, users, and metals traders have entered and helped fill the equity gap,” says Brad Isaac, partner, corporate, at Fieldfisher. But, he cautions, it’s not a ‘cure all’ and providers of such funding are generally ‘picky and choosy’.

Nevertheless, such arrangements have evolved over the last two years, becoming more flexible to accommodate individual mining projects. However, they have also, in turn, become more complicated.

Firms considering this kind of financial arrangement will likely need professional advisors to make sure they are going into it “with their eyes wide open”, says Jonathan Brooks, partner, head of mining and metals, corporate at Fieldfisher.

“It can be difficult for companies to determine pricing before they have got their head around what their project will be and what the cost of production will be further down the line. Therefore, they need to be very defined about how much they are agreeing to sell in advance and whether it’s for a set period of production or tonnage,” explains Brooks.

“Companies will not want to enter into evergreen arrangements where, ten years down the line, additional sources of reserves are found and the company is committed to sell those reserves.”

Another active part of the alternative finance market is the specialist mining private equity funds, such as Orion Mine Finance, Resource Capital Funds and Taurus. While most miners will normally consider raising equity on public markets, public bourses remain tough places for junior exploration and development miners to raise cash.

Private equity offers cash in return for minority stakes in projects, and a say in how they are run, with the aim of eventually selling on their stake for a profit.

In the last two years, some of these groups have started experimenting with new kinds of deal structure, with a shift towards specialist mining funds buying assets with an eye to permitting, building and operating them themselves.

These groups offer a “genuine alternative” for mining companies, says Brooks, especially because they will typically put in money at exploration stage.

For example, Strongbow Exploration, a Fieldfisher client, bought the South Crofty Tin mine in Cornwall, with the aim of bringing it back into production. The company has made a deal with Orion to invest $3m as part of StrongBow’s dual listing on London’s Alternative Investment Market (AIM) in exchange for an offtake for the first ten years of production, which amounts to 5% of the total production of the mine.

“The upside is that these alternative finance providers can move very quickly, their unique selling point is they will tie companies up with looser governance and restrictions than the banks and move quicker,” says Brooks.

“The quid pro quo, however, is their money is probably more expensive and they’ll likely take some equity, but they’re very open about this.”

Cryptocurrencies and crowdfunding in mining

According to Fieldfisher, one of the striking trends in mining finance over the last two years – due to its novelty, rather than the volume of transactions – is the emergence of cryptocurrencies or crypto tokens as a form of funding.

This type of financing, according to Isaac, is happening mostly in Canada and Australia.

As explained in the Fieldfisher report, tokenised financing is based on the intrinsic value of a mineral deposit or its production. This differentiates such tokens from many established cryptocurrencies, such as Bitcoin and Ethereum, which are not backed by any kind of physical security. The tokens are distributed via an initial token or coin offering using blockchain technology. Once these tokens have been issued, they can be listed on third party exchanges to facilitate trading and liquidity.

In October 2018, PCF Capital, an Australian corporate advisory firm focused on the resources sector, issued what it called the ‘world’s first’ security token for financing gold mining projects. The token, called FutureGold, is described by PCF as a gold and royalty stream-backed security token to fund gold explorers, developers and producers. Scheduled for the first quarter of 2019, the FutureGold ITO is looking to raise up to $250m.

“This area of alternative financing is an interesting development; people have raised money using tokens and blockchain, but there are more popular ways of finding funds – it’s a bit of a ‘watch this space’ area,” says Isaac.

He adds that companies should be wary of its novelty, and consider regulation carefully, but notes that it is not “inherently bad”.

“Any new form of financing is embryonic and therefore has associated risks, however, the way tokens and crypto is regulated is unclear, so I think arguably, it’s a bit riskier; but it does provide another potential avenue for people to raise money,” he says.

A big problem that still remains, says Brooks, is that retail investors are just not that interested in the junior end of the mining sector.

“Therefore, I think any token-based fundraising by a junior company is still fighting against better and more exciting investment opportunities,” he says, adding that most crypto raises have tended to be in retail, where the underlying product isn’t difficult to understand.

“There are very few raises done by resource companies this way because specialist knowledge is needed and the retail investors struggle to get their head around the viability of projects,” adds Isaac.

How to get alternative finance?

Given the growing complexity in the market – and the increased competition – how should junior and exploration companies go about securing project financing?

Firms should start by casting their net as widely as possible, and perhaps approach a specialist broker in the field, says Brooks.

“And by that, I mean not just a broker specialising in the AIM market, but people/brokers who have access to private funding, whether that be a high net worth individual or family or private equity or a wealth fund,” he explains. And then, “network like crazy”, he says.

“Speak to the bigger companies, see what interests they have in funding exploration, because another trend is, once the majors are doing well, they’re doing M&A deals, as they reducing their own exploration activities and relying upon juniors to find interesting projects for them,” he adds.

Furthermore, ask lawyers. “We know the sector well enough – and we don’t charge for this – but we can make introductions to help firms,” says Brooks.

But, while there’s no ‘magic wand’ in this currently tough market, he optimistically adds: “We and others are still doing deals.”

IPO activity all but stopped in 2020, as the investment community grew wary of the effects of COVID-19 on economies. No matter how deserving a business was of flotation, momentum was halted by concerns of when a ‘new normal’ of working patterns and trade would set in. Recently, sentiment has changed. Flotations picked up again during the second half of 2021, and now in 2022 the mood is decidedly optimistic. Business leaders have their eyes on fast rebounding economies, buoyant market indices and the opportunity once again to take their businesses public. As a result, global IPOs are expected to hit back this year. With GlobalData’s new whitepaper, ‘IPOs in Consumer and Retail: 5 must-include elements for your prospectus industry report’, you can explore exactly what is needed in the essential literature. GlobalData’s focus lies in the critical areas to get right: Interested to learn more about what to include in your IPO Industry Assessment report? Download our free whitepaper.
By GlobalData