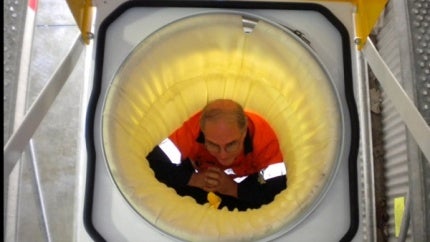 In the mid to late 1990s, larger machines in the Hunter Valley were experiencing an increase in the number of fire incidents, putting operators at risk and usually destroying or seriously damaging the machines. This resulted in increased operational costs and lost time, and always had the potential for a fatality.

A local engineer heard about Ingström Escape Chute so contacted the company’s Australian representative and soon a deployment system suitable for the mining industry was developed.

Engineers across the Hunter Valley produced a guideline called MDG15 to assist manufacturers with necessary requirements to stop the break-out of fires. This guideline has since become law and, along with the general increase in quality, has substantially reduced the frequency of fires.

At least one means of emergency egress. This may be achieved by a second door or a push out window, panel, ladder or emergency escape chute, which shall be suitably marked.

Of all these methods of emergency egress, the escape chute stands out in that it alone is able to evacuate personnel though fire. The chute has received a great deal of support as being the preferred method of evacuation, for equipment where the operator is more than 5m above ground.

Typically, an operator can get from the cabin to the ground in around five seconds.

Deployment takes one to two seconds and the descent rate for 5m would typically be two to four seconds, depending upon the level of experience using the chute.

Ingström Escape Chutes Australia has released a survey of human reactions to using the company's...