With on-land deposits depleting fast, the seabed, which is thought to be rich in nickel, copper, cobalt and manganese, is the next obvious place to look.

What if there was a way for naval architects to increase a ship’s efficiency, reduce its emissions and lower costs – all while substituting a speedy new system for the sluggish design spiral? Integrated ship design offers all this and more. It allows high-tech materials and fuels to be tested out in a simulated environment. It means architects can push boundaries and experiment to meet key goals. And it creates a digital twin for a vessel, providing a single source of truth on a build to bring disparate teams together. Doing away with the design spiral may seem daunting – but Siemens Marine have the knowhow to smooth the transition towards a simulated future. Download the whitepaper to find out more.
By Siemens Marine 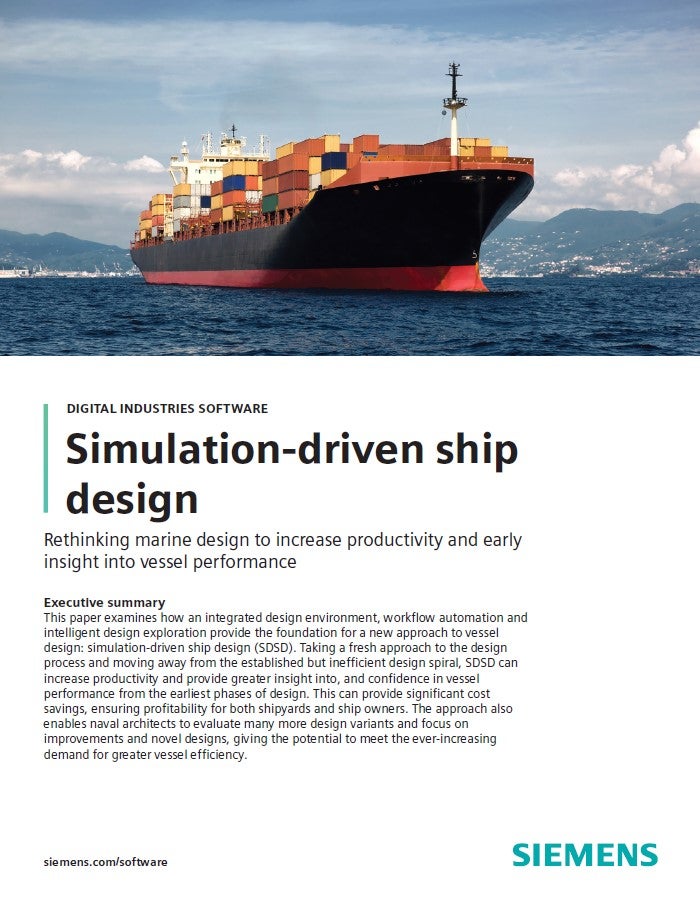 Thank you. Please check your email to download the Whitepaper.

Preparations for a marine mining economy are already underway. The International Seabed Authority (ISA), an autonomous international organisation that manages all mineral-related activities in the international seabed area, has already signed 30 contracts with governments, research institutions and commercial entities for exploration-phase sea bed mining. China holds five contracts, with interest from other countries including Belgium, Britain, Germany and Poland, as well as from the Middle East.

ISA, which was created under the United Nations Convention on the Law of the Sea, is planning to create mineral exploitation rules as early as July 2020.

However, while mining the ocean floor for nickel, copper, cobalt and manganese polymetallic nodules is still a fledgling industry at best, along the coast of the Southern African country of Namibia, marine mining has been well underway for over a decade.

Dredging for diamonds off Namibia’s southwest coast is one of the first commercial instances of offshore mining. Using specially designed ships, Debmarine Namibia, which is co-owned by the government and De Beers Jewellers, sucks up diamonds washed into the Atlantic Ocean by the Orange River.

After finding the most lucrative spots by scanning the seabed using unmanned and remotely operated vehicles, a horizontal crawler is attached to a vessel to dredge the seabed for diamonds.

Up to 60 tonnes of sediment are lifted up to the vessel through a giant pipe each hour. Aboard the ship, the sediment is washed and sifted into increasingly smaller stones, using a series of vibrating racks and rotating drums that crush rocks. Sediment that is non-diamond bearing is discarded back to the ocean floor.

Operations are going so well that in May, Debmarine announced plans to construct another diamond recovery vessel with an investment of $468m. Scheduled for 2022, the ship will be the seventh vessel in the fleet and brings the capacity to add 500,000 carats of diamonds per annum, increasing production by 35% from the current levels.

Since the company became operational in 2002, Debmarine Namibia has mined over 8km2 and produced over five-million carats. The company’s activity, however, only covers a fraction of the marine environment.

Namibia’s sea bed diamonds are within Namibia’s Exclusive Economic Zone, in shallow waters. The real riches of the sea floor however, are to be found in areas such as the Clarion–Clipperton Zone (CCZ), a remote part of the Pacific Ocean which is thought to have one of the world’s largest untapped collections of rare-earth elements, and is teeming with potato-sized deposits loaded with copper, nickel, manganese and other precious ores.

The advantage of Namibia’s shallow waters is that diamonds can be fairly easily sucked from the seabed floor at depths of up to 150m, whereas modules in the CCZ are located some 4,000 metres below the ocean surface, making mining much harder.

“Ecologically the area is quite different than the continental shelf, it will have a completely different ecosystem which is potentially more complex in its topography,” explains Dr Kirsten Thompson, lecturer in ecology at the University of Exeter.

“Mining off the coast is much easier to understand, but when it comes to offshore, we know much less,” she adds.

One company that has been trying to carry out exploration activities in some of these areas is Nautilus Minerals, which has been exploring areas offshore Papua New Guinea and Tonga. It is looking for copper- and gold-rich discoveries using proven technologies from the offshore oil and gas industries.

As proof of just how difficult this has been, escalating costs have forced the company to ask for protection from its creditors after total expenditures incurred reportedly reached just short of $461m.

Another company, DeepGreen Metals, is looking to harvest metal-rich polymetallic nodules sitting on the deep-ocean floor using a mining process that produces no tailings. The company is also exploring the CCZ, where last year it said it found 1 to 20cm diameter polymetallic nodules in water depths of 4,000 to 5,000m below sea level. The estimated resource total is 900 million tonnes of high-grade minerals.

The company is still testing its technology and is not yet ready for commercial operations.

As well as technically difficult, seabed mining is also controversial due to the damage it may cause to marine biodiversity. There is a concern that marine species may be harmed before they are even discovered.

As Thompson points out, the manganese modules that will be harvested from the seabed floor take millions of years to form in very deep ecosystems, surrounded by unique organisms that live nearby and encrust the nodules.

“Once that manganese potato is picked it can’t grow again within our lifetime. Only .0001% of the sea has been accurately mapped and sampled, so really there are massive uncertainties as to what exists there,” she adds.

“To go and mine those areas without knowing what lives there seems really counterproductive to all sorts of activities we might want to do in the future, such as carbon burial for example.”

A rudimentary test by ecologists from the University of Hamburg found that raking the seabed floor alone caused sediment to cover vast tracts and created ‘impacts… [that] reached further than anyone had imagined’, according to Nature magazine. Extracting the rocks would have been much worse.

Furthermore, a UN report in September from the Intergovernmental Panel on Climate Change said that the ocean is under unprecedented threat from global warming, which is killing coral reefs and aggravating a decline in fish stocks.

For these reasons, Greenpeace and others have suggested a moratorium on marine mining until more is known about its impacts which are likely to be irreversible.

Instead, Thompson says we should be looking for alternative ways to access these minerals using new technologies, focus on behaviour change, and creating a more circular economy.

“We have a responsibility to stop over using resources now that we know they are critically limited,” she says.

Another issue is how rewards from deep seabed mining will be shared. Theoretically, according to The United Nations Convention on the Law of the Sea, any royalties should be used for betterment of humankind for all people on earth. But how?

But there is also a concern around corruption of the governing body ISA.

“My understanding of ISA is that there are certain technical groups which are not allowed to sit in on meetings, meaning there is no scrutiny from any other parties other than those that happily support seabed mining, from a civil service point of view that isn’t right,” says Thompson.

Debmarine’s operations offshore Namibia will continue to ramp up – it has depleted only around 2% of its the licence area. But while it remains a glittering example of how seabed mining can be commercial, even if it is targeting the low hanging fruit, it is very different to what is being proposed in the deep-sea.

However, besides the challenges and ethical questions, given the increasing demand for these minerals to support the new green future and ISA’s determination to pass legislation, it is possible that efforts for marine mining of the harder to find and mine minerals could ramp up imminently. In February next year, the ISA will meet to discuss and develop further draft exploitation regulations. Once agreed and concluded, which could take some time given the amount of international cooperation required, permits could be issued within two to three years, with operations starting a few years later.

What if there was a way for naval architects to increase a ship’s efficiency, reduce its emissions and lower costs – all while substituting a speedy new system for the sluggish design spiral? Integrated ship design offers all this and more. It allows high-tech materials and fuels to be tested out in a simulated environment. It means architects can push boundaries and experiment to meet key goals. And it creates a digital twin for a vessel, providing a single source of truth on a build to bring disparate teams together. Doing away with the design spiral may seem daunting – but Siemens Marine have the knowhow to smooth the transition towards a simulated future. Download the whitepaper to find out more.
By Siemens Marine