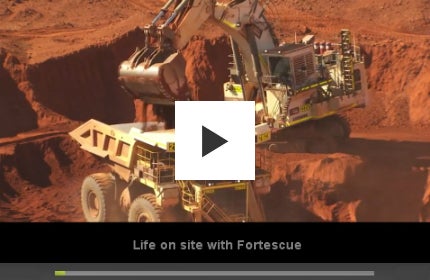 Falling commodity prices and slowing investment in the mining sector meant that Fortescue, Australia's third biggest mining company, was forced to scale back production to try and bolster its balance sheet in 2012.

But the future is looking up for the iron ore major, as rising demand from China could mean the resources boom is far from finished.

In January 2013, Fortescue resumed work on its Kings deposit at the Solomon mine in Western Australia, after putting the deposit on hold and announcing job cuts in September, when iron ore prices fell to a near three-year low of $86.70 a tonne.

"Rising demand from China could mean the resources boom is far from finished."

The resumption means the miner now expects to lift production to 155Mtpa by the end of this calendar year, from its current 100Mtpa, achieved in December and ahead of the targeted 95Mtpa.

"The recent improvement in iron ore prices and market outlook, along with a number of measures undertaken by Fortescue, including the sale of non-core assets, a reduction in operating costs and the restructuring of existing bank facilities, underpinned the decision to complete Kings," CEO Neville Power said in the statement.

Australia was one of the few countries to escape recession five years ago, owing to its growing demand for raw material exports from China. But, in August 2012, amid slowing investment in the mining sector and as China headed for its slowest economic growth in more than a decade, Australia's Resources and Energy Minister declared the resources boom had come to an end.

"Fortescue is optimistic about the future and expects volatile market conditions in the Asian country to even out."

Demand seemed to pick up in December as Fortescue shipments rose by 32% from 2011, nearly all bound for Chinese steel mills, reported Reuters at the time.

But Dr Faber, the author of the Gloom, Boom and Doom report, warned that Australia shouldn't rely on China demand. "I would assume that the Chinese economy will grow at a much, much slower pace in the next ten years than in the last ten years, and this will have an impact on the demand for raw materials," Faber, a regular speaker on the conference circuit, told the Mining Indaba forum in Cape Town this month.

Still, Fortescue is optimistic about the future and expects volatile market conditions in the Asian country to even out.

"Demand seemed to pick up in December as Fortescue shipments rose by 32% from 2011, nearly all bound for Chinese steel mills."

Looking at the year ahead, Fortescue plans to focus on increasing production at its flagship projects.

In January, the miner awarded Macmahon Holdings a A1.8bn ($1.85bn) services contract for its Christmas Creek expansion. The five-year contract would increase the capacity of the Chichester operations in Pilbara, which also includes the Cloudbreak minesite, to 95-million tonnes a year.

But even as commodity prices recover and shipments increase, the company has started talks to sell a 40% stake in its rail and port operations in Western Australia for $4bn to pay down billions of dollars in debt.

A key concern for Fortescue going forward is the Minerals Resources Rent Tax introduced in July 2012, a levy the company has actively challenged in the High Court on constitutional grounds.

The miner doesn't expect to pay the tax this financial year, but as iron ore prices recover, a win for the Labor Government in November's election could mean its profits will be cut in the years to come.

For now, it's business as usual.

New, automated technologies are setting the tone for a future of mining characterised by increase in production rates, safer operations and high profit margins.

Digging up the dirt: Australia and China's fragile mining relationship

China's demands for minerals and Australia's abundant supplies have formed the backbone of a strong partnership.