GlobalData’s mine-site technology surveys investigate the degree to which mines across the globe have invested in a range of technologies, spanning mine management software, predictive maintenance, drones, autonomous vehicles, collision avoidance, wearables, remote control vehicles and more. In this report, we compare the overall investment trends by technology as well as by region and key country, by type of miner – major or non-major – and by mine type. We also compare results from the most recent survey, conducted between December 2021 and February 2022, with previous surveys. Have a look at our report and gain insights into: Read this report to formulate winning business strategies for the road ahead.
By GlobalData 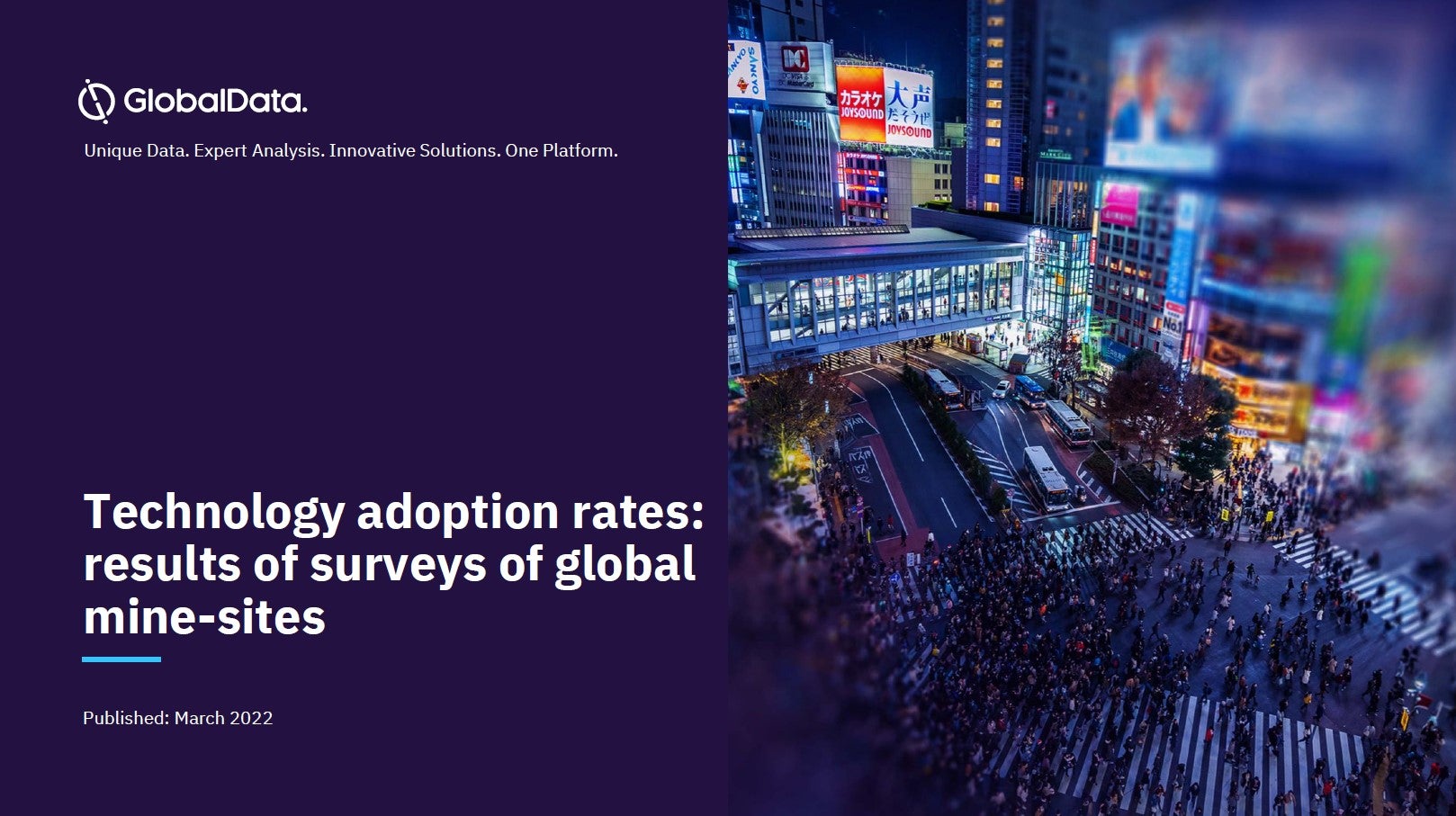 The world is getting smaller. International scrutiny on governments and their natural resources operations is growing, thanks to information leaked or hacked from various organisations. Corruption on a global scale has been in the public conscious of late, following the mass-journalistic effort to bring tax evaders to light using the Panama papers. Proving things the public has always suspected is far from a new phenomenon, though.

India's problem with corruption in minerals mining was an open secret, exacerbated by seemingly indifferent federal, state and district governments. However, since 2010 a number of reports have revealed that certain officials were not just indifferent, but actively involved in 'scams' in the iron ore and sand sectors.

In 2011, the Lokayukta report detailed the methods iron ore magnates the Reddy brothers and the state health minister Badavara Sriramulu colluded in avoiding royalties and under-reporting extraction in the state of Karnataka. In 2012, a report by the Shah commission found widespread corruption in Goa's iron ore sector, including illegal transport, under-reporting and illegal mining, costing the state around R35,000 crore (one crore is ten million rupees), around £3.5bn.

The problem, says telematics4u (T4U) founder and CEO Pratap Hegde, is that the mining companies pay a percentage fee based on the amount of mineral they extract. "This was always the point of corruption because leaseholders [of land to mine] used to under-report the extraction and therefore reduce the royalty payment," he says. "After this the un-reported mineral goes onto the black market whereupon it is untraceable."

Hegde and his co-founders decided to put their technological knowledge to the test to help alleviate the problem of corruption in India's mining states. Following successful partnerships with car hire companies, food chains and other high-profile industries, it was primed for its next challenge.

A challenge it would prove to be. This isn't an easy problem to bring under control, but one which has been costing Indian districts in Karnataka, Goa and Andhra Pradesh billions of rupees. The total value of mineral production in 2014-2015 is estimated to be R26,637 crore, around £27bn. Instead of collecting royalties on this figure from a handful of large mining companies, district governments are responsible for chasing the mines in their districts for royalties that could make a real difference to local government coffers.

One complication is that the Indian mining industry is made up of approximately 3,318 small operational mines, according to the Indian Ministry of Mines. Another is that transportation of minerals is performed by individual truck drivers who are engaged by the mining company, and so not subject to company policy. "It is a very unique, developing world scenario" says Hegde.

"The Indian mining industry is made up of approximately 3,318 small operational mines."

The T4U team decided an all-encompassing, end-to-end approach was needed; what it calls the ecosystem approach. In Goa, this meant bringing dozens of mining companies, over 8,000 truck drivers, 350 road bridges and multiple state and district government departments on board, to use a common technology platform.

In Karnataka, T4U's first project of this kind, the initial step was to engage the state and district governments. "We knew that the government was in a difficult situation," says Hegde, so it was important to stress the scheme and its roll-out would be of no cost to them. They only needed to assist in supporting it.

"As a part of this, we have installed all of the technology for the vehicles and bridges and created mobile apps for the drivers, as well as back end systems," says Hegde. "All the stakeholders are using one system throughout the entire process – from royalty payments, to excavation, to transport – everything is transparent."

A solution for the entire ecosystem

The T4U system is a platform which can be used by all stakeholders in the process of minerals mining and movement. Each individual truck is weighed without its load and fitted with a GPS device that monitors location and driving habits.

On-site weigh bridges and bridges on surrounding roads are then fitted with sensors that calculate the weight of the mineral on the trucks as they go over them. This provides the data centre in Bangalore with information detailing all trucks in the area; where they are, where they're going, and the load they are carrying, enabling staff to spot if minerals have been siphoned off.

All of the data can be accessed by all stakeholders using a smartphone app designed especially for the purpose. Reports can also be issued to the district and state governments to aid the royalty payment processes. Truck drivers pay for the installation of the sensors, as well as a monthly fee of Rs400 for the upkeep of the technology.

Tracking drivers doesn't just prevent corruption activities. According to Gov Shetty, T4U founder director, the platform can be used to limit traffic at certain times of the day, or prevent trucks from leaving the site if there is traffic on the road ahead. He says, "During the school closing time, we ensure that no transportation happens"; this engages the local community by lowering risk to children using the route.

Benefits for all, especially district governments

Benefits of the systems are beginning to show in the areas where they are up and running. For example, Hegde estimates that in the sand sector, the government could gain Rs600m, £6.1m, in royalties. "There is freedom for districts to spend the money they collect for rural development," he says. "Considering the figure was close to zero, this is a big improvement."

"There is freedom for districts to spend the money they collect for rural development."

As well as making money, the system can save government funds in a variety of ways and through issuing drive permits online, the process is more transparent and requires less manpower. As the vehicles are tracked, compliance checks at posts along the routes are faster, saving time and money. This also helps create better relationships between officials and truck drivers as no bribes need to be passed to get on with a day's work.

Any computer-based system transferring data online is at risk from hackers, particularly one which purports to end corruption by powerful mafia groups. T4U says it goes to great lengths to protect the system, using multi-layered encryption and working with Tata Communication to ensure the safety of data. A T4U spokesperson says, "With so many measures in place, so far the system has been safe from any malicious attack."

Whether the system is completely safe from vandalism or manipulation of the hardware used to measure the mined material is unknown. However, no such attacks have been noted thus far.

Plans for the future

The possibilities for this type of platform are seemingly endless. According the Hegde, the company is looking into deploying data analytics to provide its customers and the government with information on trends and potential efficiency savings. Another possible use for the technology could be to hold miners to account for their impact on local people.

A Human Rights Watch report published in 2012 found that, "In some communities visited by Human Rights Watch, farmers complained that endless streams of overloaded ore trucks passing along narrow village roads had left their crops coated in thick layers of metallic dust, destroying them and threatening economic ruin."

If all truck movements are monitored by local government bodies and independent NGOs, action could be taken to minimise the effect of mineral transportation.

Telematic4u has already expanded its operation to over 50 countries, mainly focusing on the Middle East and South East Asia. As the technology has been proven for iron ore and sand, it is clearly suitable for the excavation and transport of other minerals in countries suffering from similar transparency and corruption issues.

"Seeing is believing and it works", says Hegde. "There is interest from other regions and other states, even other countries."

GlobalData’s mine-site technology surveys investigate the degree to which mines across the globe have invested in a range of technologies, spanning mine management software, predictive maintenance, drones, autonomous vehicles, collision avoidance, wearables, remote control vehicles and more. In this report, we compare the overall investment trends by technology as well as by region and key country, by type of miner – major or non-major – and by mine type. We also compare results from the most recent survey, conducted between December 2021 and February 2022, with previous surveys. Have a look at our report and gain insights into: Read this report to formulate winning business strategies for the road ahead.
By GlobalData