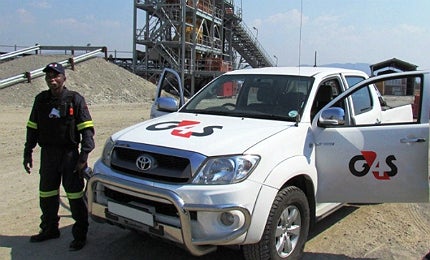 The mining industry is experienced at working in hostile and sometimes politically challenging environments, but as further growth and reserves are sought, often companies will move into more hostile and unstable environments that provide their own unique challenges. In such situations security becomes paramount, a fact that was highlighted at the Hellas Gold Mine in Greece which was raided this year.

UK-based security company, G4S, is one company that has successfully benefited from the growing need for intelligent mine security solutions and management. More than two years ago the company revaluated its business approach to the mining security sector and made necessary changes, which resulted in the mining division achieving 50% growth in 2012.

Global mining director at G4S, Andrew Hames, whose role was created at G4S as part of the department’s new strategy, evaluates the division’s recent success and more focused approach, discusses the challenges and possible changes the sector faces and relays what he deems to be the most important factors to consider when operating a successful mining security company.

"G4S is one company that has successfully benefited from the growing need for intelligent mine security solutions."

Andrew Hames: After a strategic review conducted in 2011, it was decided the business would benefit from a more sector-focused approach to its mining operations. This new approach was supported by the development of regional mining teams in Canada, US, Latin America, AME, Africa and the UK.

This dedicated expertise enabled us to develop our end-to-end integrated security solution which now includes 100 service offerings across the project lifecycle, including risk consulting services, remote site facility management [and] electronic security solutions, among others.

We also made investing in new technologies a priority for our business. An example of this would be our Secure Trax system [a multifunctional software platform for both on-ground security personnel and those overseeing them].

HV: In which areas of the world is G4S’s mining security sector experiencing the most growth?

AH: We are seeing the most growth in Latin America, APAC and African regions. Companies are pushing out to new environments for new opportunities. Deeper and more technical sites can be costly and mitigating the associated new risk and threat environment is crucial to the long-term success of any project.

HV: Do you think growing political unrest in certain areas of the world and attacks, such as the Hellas Gold Mine attack in Greece, have resulted in mining companies ramping up security?

AH: Mining companies are taking a more holistic approach to their mine site security after recent high-profile incidents and are remaining ever-vigilant and flexible in the process.

Operating in remote and or hostile locations is not new for the mining sector. Thorough risk and threat assessments and an emphasis on the collation of credible intelligence and analysis of that intelligence is critical.

HV: Can you give an example of a challenging situation at a G4S site?

AH: Each region will bring very different and sometimes complex challenges that require many macro and micro considerations.

"Often companies will move into more hostile and unstable environments that provide their own unique challenges."

For example, one G4S site is the Aquarius Platinum Kroondal mine in South Africa’s North West Province. Here the priority is to control access in order to counter external criminal threats against the company’s equipment and infrastructure, while maintaining order among the large workforce.

Part of the facility is located in a high crime area where there is high risk of theft of items such as copper cabling and tools. G4S has countered this threat by ensuring the perimeter is secure, access is carefully controlled and the site monitored through patrols and CCTV cameras.

Our personnel also provide a response force in the event of industrial disputes or other manifestations of unrest among the thousands of workers and contractors employed at the mine. A strike in 2009 closed the Kroondal mine for nearly six weeks and cost the company around £6m in lost production. Our security personnel succeeded in limiting further losses from vandalism by disgruntled workers by protecting company property without further exacerbating a volatile situation.

HV: Where do you see mining security going in the near future?

AH: Our customers are facing huge external pressures which will have an impact on how we operate; however, we see this as an opportunity to demonstrate the additional benefits they can obtain by working with us.

In the near future, there will be many pressures they will face, such as a new operating environment, which may include increasingly stringent industry standards; short-sighted taxation frameworks; NGO scrutiny; resource nationalisation and so on.

We as a company have to think further ahead about how we can be innovative in assisting our customers develop long-term sustainable projects. This will involve heavier involvement at the strategic decision making stage of a project, when exploration and assessment is underway through to the evaluation and analysis of a particular project.

HV: What do you consider to be the four most important factors when operating a successful mining security company?

AH: There are many factors that must be considered to ensure successful security operations in the mining industry. Four examples include excellent ‘communication’ both internally and with customers, building long-term working ‘partnerships’ with customers and integrating our initiatives into their sustainability efforts, employee training and ‘continuous improvement’ and innovation.

HV: Do you think G4S can achieve the same kind of growth this year as last?

AH: While we grew substantially in 2012, we see the coming year as an opportunity to further develop our existing relationships and forge some new key strategic partnerships that utilise our vast service offering.

While there will be pressures on our division to replicate the success of this year, we are cautiously optimistic about the opportunities in the coming year. We have a strong pipeline and see our unique position in the industry as a real opportunity to continue to grow our mining portfolio.

HV: What next for the G4S mining division?

"Mining companies are taking a more holistic approach to their mine site security after recent high-profile incidents."

AH: Last year was very much about building on all the development work we have established since our new sector-based approach came into place.

This year, we will be looking at further developing our already effective and successful model. A large part of this will be to explore some global partnerships with some of the world’s leading mining houses. This will hopefully lead to a further long-term growth.

Regionally, we are looking to develop further sustainable and strategic partnerships, with a particular focus on Canada, Australia and Africa.

We are also launching our G4S Human Rights policy, which has been developed following extensive consultation with human rights experts. The policy is based on the latest ‘UN Guiding Principles on Business and Human Rights’, and is aligned with the ‘International Code of Conduct for Private Security Service Providers’.

Anglo American’s newly-appointed CEO Mark Cutifani has his work cut out for him.