Planetary Resources and the age of asteroid mining
Menu 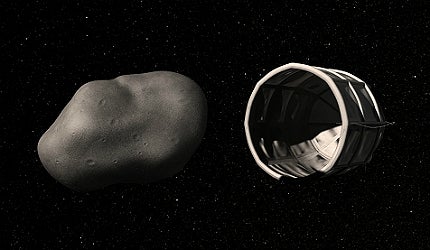 A team of scientists are on a mission to mine asteroids for their precious metals and rocket fuel resources. They’ll explore these orbiting bodies, capture them and extract their reserves using robots, before returning to Earth with their new-found fortune.

It sounds like the stuff of science fiction. But, even with movie maker James Cameron onboard, it’s not fantasy.

"Lewicki hopes to use the opportunity of extracting reserves from asteroids to benefit the mining industry both in space and on earth."

Planetary Resources – a newly launched space company made up of Nasa scientists Chris Lewicki and Tom Jones and space entrepreneurs Peter Diamandis and Eric Anderson – said it wants to mine near-Earth asteroids within ten years.

Cameron, who is also known for his exploratory work, will act as company adviser, while Google’s Eric Schmidt and Larry Page are among the billionaires who will invest in the project, which will initially focus on developing robotic spacecraft for surveying missions.

Despite the level of interest and investment the company has already received, some experts are sceptical about the economic feasibility of this scheme.

They say that the revenues made from bringing gold, platinum, water and rhodium back to Earth won’t make up for the costs for infrastructure and missions to space required for such a bold project.

There are also significant concerns surrounding the technical challenges that scientists and their business partners will inevitably face as they head into the unknown.

The simple task of mining asteroids

Seattle-based Planetary Resources was formed in 2009 by Diamandis and Anderson – two pioneers in the commercial space sector – who had one question in mind, "what’s the next big thing in space, which will deliver multiple benefits to humanity?" The answer was mining.

Chris Lewicki, chief engineer and CEO of Planetary Resources who has previously been involved with the lifecycle of Nasa’s Mars Exploration Rovers, explains the goal of his company: "We’ve always held the vision to bring the solar system within humanity’s economic sphere of influence, which is currently, for the most part, tied to the planet."

"One of the reasons why this is a great time to get into asteroid related resources is that we have been studying them and discovering them for many decades and really in the last 15 years our knowledge of them has grown exponentially," Lewicki adds.

As of 2012, there are almost 10,000 known near-Earth asteroids (NEAs), a huge increase from the 300 discovered in the mid 1990s, and Planetary Resources hopes to identify even more of these by building and launching series of small space telescopes, which will better characterise what they are made of.

"That can be done remotely from millions of miles away but eventually we will use that information to select a few targets that are both accessible, of the right size and are made from the right stuff that we should go and take a closer look at them," explains Lewicki.

Once Planetary Resources has visited the asteroids and characterised their resources, the company will mine water ice, which Lewicki and his team says will provide a stepping stone for deep space exploration.

"For a very long time the most profitable resource will be a material as simple as water. Water in space is presently worth more than $22,000 a litre and can be used for many things – radiation shielding, you can break the hydrogen and oxygen apart and use it for breathing, and hydrogen and oxygen also happens to be used to fuel rockets," Lewicki adds.

"Much of the attention is of course on the group of metals, which we know are on these asteroids in abundance, but water can open up space exploration."

Eventually, Planetary Resources hope to mine this group of metals, including platinum, gold and rhodium, and bring them back to earth. But, new technologies will be required for mining and processing the asteroid resources in a micro-gravity environment.

There are a number of challenges which Planetary Resources will face when finding, capturing and mining asteroids.

First, thousands of candidate asteroids must be evaluated for their suitability. Then, during a launch mission to encounter viable objects, timing will be crucial since NEAs are located in orbits that are not always close to Earth.

Rob Mueller, Nasa Space Systems engineer, says: "The journey will be long and will require high specific impulse propulsion such as ion thrusting and precise navigation. Mining of the actual asteroid belt will be more predictable but these target asteroids are further away and will require spacecraft journeys that will last for years."

When the asteroid is encountered, then it will be necessary to capture or anchor to the asteroid – another major challenge, according to Mueller.

The regolith must be controlled and transferred into a containment vessel and beneficiated and processed in micro-gravity, a difficult task since most known processes rely on gravity.

"Then the resource products must be transported to the end user in space or back to Earth, requiring more propellant. If the resources are volatiles, such as water ice, they must be contained and conditioned so that they don’t sublime into space. Each step has a risk associated with it and the communications delays of more than 40 minutes mean that this equipment must be largely autonomous," explains Mueller.

Even with all these hurdles, however, Mueller believes Planetary Resources’ mission is technically feasible. The real test, he says, will be to accomplish its project economically.

Asteroid exploration is not a new activity – in 1998 entrepreneur Jim Benson established SpaceDev with the intent to build the near Earth asteroid prospector and be the first publicly traded company in the business of exploring space. These plans, though, never panned out.

Since then, the Japanese Space Agency has been involved in a mission to explore asteroids and Nasa is currently exploring capabilities for a human visit to an asteroid by 2025.

The huge amount of interest in asteroid mining is understandable – based on known reserves on earth and growing consumption in developing countries, it is estimated that key elements needed for the modern industry, such as gold and platinum, could be exhausted within 60 years.

Rowan Watt-Pringle takes a closer look at some exciting work being conducted with biopolymers in Alaska to see if this technology really does have the potential to return barren land to its original ‘wilderness’ state.

Therefore, it has been suggested that the infinite quantities of reserves in space could more than fill this supply gap.

Economic analyses suggest, however, that mining asteroids will not be cost-effective, even with platinum and gold valued at $1,600 an ounce. An upcoming Nasa mission to return just two ounces of an asteroid to Earth will cost about $1bn.

But Planetary Resources sees its project as an opportunity for dramatically lowering costs of space exploration.

Lewicki says: "We recognise, like any mineral industry, it is a long term venture and that we won’t get a return on investment in two to three years or venture capital in five to seven years.

The company, which is made up of about two dozen engineers, is developing low-cost spacecraft and taking risks that larger companies may not be so eager to try, according to Diamandis.

"Small teams are nimble; they are willing to try new ideas that are going to be lower cost and a breakthrough approach. Ultimately, when you are trying a new technology for the first time it has a risk of not working, but if it does work, that’s where breakthroughs come from," Diamandis said following the launch of Planetary Resources in April 2012.

John Mankins, a 25-year Nasa veteran agrees and adds: "A key to success will be in keeping operations costs minimal over long-duration missions – that implies a small ground crew, and a high-degree of autonomy in space systems used.

"If we can secure those resources from near-Earth space cost-effectively, this effort could actually support a more sustainable environment on Earth, while allowing the continuing development of a better quality of life for the billions who still live in poverty around the world."

Lewicki hopes to use the opportunity of extracting reserves from asteroids to benefit the mining industry both in space and on earth.

"It’s an extension of the terrestrial mining community and not in competition with it. As humans have explored throughout our history, we’ve gone to new frontiers and we have used the resources at those frontiers to help us stay there and that is what we are doing with asteroid mining," Lewicki believes.