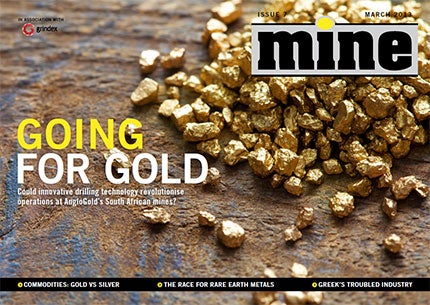 Despite the broad variety of uses for platinum, investment in the precious metal has largely lagged behind gold. But as platinum prices are on the point of achieving parity with gold, we ask experts what investors and miners can expect for these two precious metals.

We ask Anglo Gold Ashanti how it aims to revolutionise gold mining operations in South Africa with raise bore drilling and other projects. China is dominating the market for rare earth metals, but the US has plans to catch up with a $120m investment. We find out how resources around the world compare.

We also investigate Australia’s plans to expand the mining tax, and take a look at the Greek mining industry caught between environmental opposition, economic woes and a new ‘fast-track’ approval programme which could provide hope. Finally, we take a look at the ups, downs and big issues the industry can expect for the year ahead.

Trends to Watch
Low commodity prices and high operating costs dented profits last year, but will business improve in 2013? MINE charts the ups and downs that the industry can expect for the year ahead.
Read the full article.

A Reversal of Fortune
Platinum has reclaimed its price premium over gold, but what will 2013 have in store for the two precious metals? CPM Group commodity analyst and precious metals specialist Erica Rannestad gives an expert view.
Read the full article.

Raising the Stakes
Rare plans are afoot to catapult South Africa back to the top of the global gold mining industry and raise bore drilling could be the way forward for revolutionising local mining operations.
Read the full article.

The Rare Earth Race
China is dominating the market for rare earth metals, but the US has plans to catch up with a massive investment in research. MINE charts a world map of rare earth minerals and exploration plans
Read the full article.

A Flawed Policy
Australia’s goal to raise $2bn from the mineral resource rent tax was missed by a clear mile in 2012. What could the future hold for the policy after the 2013 federal elections?
Read the full article.

Trouble in Greece
Armed attacks, protests and legal battles have left Greece’s gold mining industry in a precarious position, but a controversial new mine may change the fate of the Greek economy.
Read the full article.

Tyres represent a major cost factor, but with the right management their efficiency and lifespan can be increased. In the next issue we profile tools and technologies to monitor and maintain OTR tyres. We also explore current market trends for commodities and find out how automated mineshaft inspection systems promise cost savings and improvements in safety.

A wealth of proven resources have attracted mining giants to Mongolia, but with strict new rules about to come into force and an uneasy but historically potent allegiance with China still looming large, we investigate what the future will hold for the country’s mining industry.

We also take a look at Goa’s troubled mining industry and investigate the long-term effects of a ban on iron ore mining that was issued following damning reports about the country’s submitted EIA forms last year.

The digital magazine is viewable on any computer with Flash Player installed. It is also viewable on mobile devices, iPhones and iPads, although some features and videos may be disabled.

View the archive of back issues.