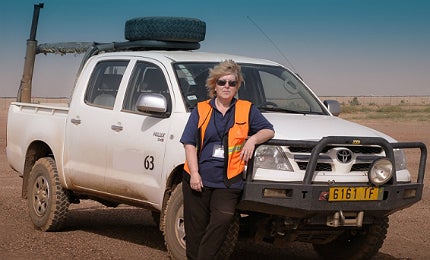 Human graves may be the last thing miners expect to encounter when assessing the land for expansion works. But this was the situation one company had to face when planning for additional tailings dams needed for a major gold mining operation in the Sahara Desert.

In 2008, six unusual rock formations were discovered by local miners working in Mauritania, in an area that was once a fertile valley and busy camel trading post.

An initial assessment by Christine Blackmore, a principal environmental geologist at Wardell Armstrong International, who was carrying out geotechnical and environmental work on the land at the time, indicated that the rocks might prove to be nomadic graves, as rumoured by the workers.

"Six unusual rock formations were discovered by local miners working in Mauritania, in an area that was once a fertile valley."

Keen to respect the land and surrounding community, the mining company, which Blackmore does not name, made a request to the Mauritanian Government to continue with its project, but was refused by the Ministry of Religious Affairs.

The company had a serious problem – without building their tailings dams, gold production would stop.

It seemed unlikely that the ruling would ever be overturned, but in 2010, after discovering another 24 archaeological anomalies, the mining firm turned once again to Wardell Armstrong for advice.

Blackmore explains how a team of geological, geoforensic and legal specialists stepped up to resolve the case.

Christine Blackmore: I was the inspector on the building of the tailings dams and it had been rumoured that there were some graves there; however, a Mauritania archaeologist disputed this. The mine manager was never convinced of this [assessment] though because the construction was being done by local people and they’re all from the nomadic tribes and they know what graves look like. So they asked me if I could have a look and I did identify what I imagined was a [nomadic] grave.

SB: What was the process you went through to conclude that some in the rocks were in fact graves?

CB: First of all, I got them surveyed in and noted on a plan. Then I looked at whether they had proper footstones and proper headstones.

"The company had a serious problem – without building their tailings dams, gold production would stop."

I also talked to a lot of locals about why people would be buried there and what the area was like pre-mining. One thing that came out was that there was a smallpox epidemic in around the 1960s and older people told us that there were some deaths in the area. This really sparked [the investigation] off.

Some of the assessment was based on my experience and knowledge of working in the desert for a number of years. You have to know what you’re looking for, otherwise you’d think the graves were just a pile of rocks.

They aren’t like what you would see in the Western world. The other side was based on geology – so, for example, where did the rocks come from and how were they formed? Some of the headstones and footstones had obviously been carried because you don’t find big boulders in the desert.

SB: How many actual graves were found?

CB: There were 30 archaeological anomalies; I call them that because if I called them graves it would have been like Crime Scene Investigation. There were four formations identified as actual graves, out of which two have been preserved because they weren’t located in the area which was due for mining expansion, and two have been exhumed.

SB: Have you ever come across graves at a mine site before?

CB: No, this was the first time I’d encountered graves on scale where we had to investigate and move them for the purposes of an expansion project. Dr Laurance Donnelly, who works all over the world as a forensic geologist, gave me some advice on how we could go about this. I then got Professor Mohamed El-Hacen Ould Lebatt on board, who is a Mauritanian national and a specialist in Islamic cultural laws and traditions.

SB: How did you overturn the ruling made by the Ministry of Religious Affairs?

CB: When people die in the Islamic religion the body actually belongs to Allah and not to the family and that was one of the crucial points in changing the government ruling.

Also, in Islamic teachings, there is a section in the Quran which says if a grave is in the way of public interest and the welfare of Islamic people, it can be removed.

SB: How long did the legal battle take?

"Some of the headstones and footstones had obviously been carried because you don’t find big boulders in the desert."

CB: It took us about 14 to 18 months because reports had to be made by myself and Professor Lebatt.

The actual overturning of the ruling was quite quick, but there was quite a lot of work that had to be done beforehand. For every single archaeological anomaly assessed, I made a full dossier of what was there and included photographs.

It was a landmark ruling in North Africa, because the mining company didn’t expect it to be overturned.

SB: How did you ensure that the graves were treated with dignity and respect?

CB: When we confirmed which rock formation was a grave and which rock formation was an archaeological anomaly, a committee was put together, which was made up of Islamic leaders, elders from the village and so on. So everybody who had their fingers in the pie, shall we say, was represented on the day of exhumation. Also, there was a representative from our company who signed off the exhumation to say the body has been removed, taken to the local cemetery and coffins were made to transport them.

SB: Could you explain the process of getting the site ready for mining?

CB: Once the bodies were removed it meant we could build some Carbon In Leach dams for gold mining. So we carried on with the site works because the other archaeological anomalies [which weren’t graves] were ruled out as bogus ones.

Now, the mining company can carry on with the expansion and operate a new floatation dam, which is a big circular 2.5km dam, as it should have been operated in the first place.

Monster haul trucks are essential for smooth material handling in the mining industry.