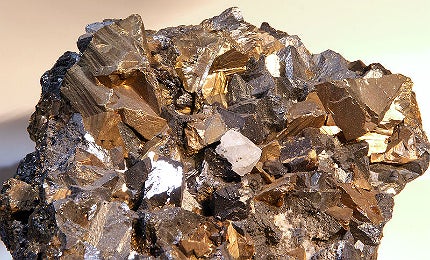 Mining for natural resources, such as Chalcopyrite (above), a copper iron sulfide mineral, is seen as risky in this bleak economic climate. Image courtesy of Didier Descouens.

The first casualty of the bear market in natural resources has been investor confidence. More than $17bn is raised annually by early-stage exploration and development companies, feeding a metals and mining M&A sector worth $229.9bn. This managed retail capital, the lifeblood of the industry, has all but dried up as hedge funds and small equity investors become increasingly risk averse. As a result, many cash-strapped junior mining operators may not survive into 2014.

“ExplorationFunder is a merger of tech start-up ideals and a new movement in finance,” enthuses CEO Rob Leclerc. “The past several years have been incredibly tough on a desiccated junior resource sector and there have been spectacular companies that have struggled to raise capital.

“Now, with ExplorationFunder, there’s a real do-it-yourself opportunity to get smart in this industry.”

“Clearly, a radical new approach is required that incentivises investment and facilitates growth.”

The web-based platform uses crowdfunding to raise relatively small amounts of investment capital from a large number of accredited investors. Originally utilised by activists in support of activities such as disaster relief, citizen journalism and scientific research, the crowdfunding market has exploded in the US in the wake of the Jump Start Our Business Start-ups (JOBS) act.

Signed into law by President Obama in April 2012, the legislation incentivises small business funding by exempting crowdfunded offerings from federal securities regulation. Current estimates put the potential value of the crowdfunding market for non-accredited investors at $400bn and $1tn for accredited investors.

ExplorationFunder, currently available in a Beta format ahead of a full launch in June, also leverages the power of social networking to bring greater transparency and communality to the capital-raising process. Standardised company and investor profiles are combined with rich infographic modules that rapidly relay complex data relating to the location, size and nature of a deposit; possible and proven mineral reserves; project timelines; and, most saliently, in-depth information about the company that is looking to raise capital – everything from share price to market capitalisation.

In this way, potential investors can become well-versed in technical aspects of the natural resources industry and even sit in on conference calls with mining company CEOs. Far from promoting anonymity, the internet in this context is used instead to bolster investor confidence in a specific company or project by humanising the key players, as Leclerc is quick to point out.

“Even now, most corporate web pages are not embracing new media techniques,” he says. “They should be using dynamic media to take the investor through the human experience, introducing the key people. Investors may not need to meet them and shake their hands, but they do need to look them in the eye – even if it’s through a video – to get sense of who they are.”

Risks and rewards: early-stage exploration and due diligence

Historically, natural resource companies and investors have been slow to take advantage of multimedia communications tools, a short-sighted approach in a technically complex industry where the risks for investors are high and the greatest growth opportunities occur at an early stage.

Even gold and copper-leach mining projects – traditionally the preserve of smaller exploration firms, since they require relatively little costly infrastructure compared to base metal deposits, such as copper concentrates, nickel and zinc – are often seen as risk and capital-heavy compared with, say, tech start-ups.

“The web-based platform uses crowdfunding to raise relatively small amounts of investment capital from a large number of accredited investors.”

“Early-stage exploration may be high-risk, but it’s an absolutely critical part of the mining process,” says Mike Page, a world-renowned nickel geologist and ExplorationFunder’s technical director. “In order to get metals to world markets, you’ve got to be able to find them first.

“Right now, there are junior companies searching for large copper deposits hidden under valleys between the mountain ranges in Arizona and Mexico. That’s a very early-stage, high-risk exploration and these operators need seed funding to carry out initial studies that may indicate buried deposits.

“Establishing a credible technical base, one that’s transparent to investors and regulators, is very important,” he adds.

Junior companies without the financial and operational muscle of global behemoths such as BHP Billiton or Rio Tinto must therefore work extra hard to convince sceptical investors that they have what it takes to identify valuable assets and execute a realistic business plan – and to do that effectively, a strategic online presence is a must, as Leclerc explains.

“It’s incredibly difficult for natural resource companies outside of the Fortune 2000 to connect with the broader investment community, because they don’t have the equivalent of a CNBC to educate and communicate with stakeholders 24 hours a day,” he tells me from ExplorationFunder’s headquarters in New York.

“In the same way that individuals find greater utility in having a standardised LinkedIn space as opposed to a personal web page, we need to do away with lonely, hard-to-navigate and ugly corporate web pages in favour of social corporate profiles that allow companies to connect with all stakeholders.”

I ask Page how the company’s due diligence strategy ensures that ExplorationFunder only attracts top-grade businesses by drilling down into their financial and management structure.

“We’ve gone to great lengths to build a framework that, in some ways, is modelled on the Canadian and Australian regulation systems,” adds Page. “Natural resource companies must first produce independent reports, Canadian TSX 43-101 or Australian ASX/JORC-type documents, and provide enough technical and financial data to allow accredited investors to understand that company’s assets.

“The members of our advisory board all specialise in a particular metal deposit; one for gold, one for nickel, myself for mining and metallurgy. These individuals give comfort to potential investors that a company is being reviewed by someone with independent integrity and intention.”

I conclude by asking Leclerc and Page for an overview of the natural resources marketplace, and whether ExplorationFunder’s aspiration to eventually expand beyond crowdfunding to become the ‘Facebook for natural resource companies’ is realistic in such economically straitened times.

“The expansion in China is by no means over and a lot of this pessimism has been overdone,” states Page. “There are plans to move 400 million people over 20 years from outlying districts to the cities; that’s a lot of people, a lot of copper wire, a lot of steel for buildings, a lot of washing machines, fridges and air-conditioners.

“Another major discovery is Ivanplats’ Kamoa copper project buried 50m under Kalahari sands in Mongolia, which up until seven years ago, was never even dreamed about. Everyone thought that the traditional copper belt in the Congo stopped at the mining town of Kolwazi.

“There are also a acid-leach mines in Arizona, Mexico, Peru and Chile that are producing 99.9% grade copper cathodes – LME-grade copper,” he continues. “This type of metallurgy recovery is relatively simple and the smaller amounts of capital involved make it attractive to smaller firms.

“However, there’s oversupply in the copper market right now, the same with nickel. What it comes down to is that companies with high-grade ore are going to make money, while those with the very lowest grade are going to struggle. There’s no question it’s a challenging time.”

“There is a lot of money in the industry and it is an extraordinarily important industry,” says Leclerc. “Yes, there may be a pull-back, but ultimately we need what’s in the ground.

Seasonal declines seem to be on schedule for April, with weak demand for copper in particular indicating that growth may be slowing down.

Infographic – counting the cost of comminution

As high grade ores stocks dwindle, the need to divest more energy in the pursuit of profits is wreaking havoc on company bottom lines.

13 Jan 2021
Registration is disabled.
We use cookies to ensure that we give you the best experience on our website. If you continue to use this site we will assume that you are happy with it.ContinueLearn more