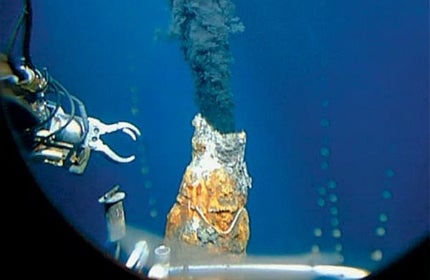 Licences to mine the ocean floor could be awarded as early as 2016, according to a United Nations report, which puts forward the eagerly-awaited first plan for managing the extraction of polymetalic ‘nodules’.

Seabed mining has been on the radar for decades, but high production costs, low commodity prices and limited available technologies have put projects on hold.

Now, with a surge of interest from state-owned and private mining companies, the UN’s International Seabed Authority (ISA) is finally considering how to license the first marine mining operations and develop a fiscal regime that will ensure the fair distribution of profits to host countries and their commercial exploiters.

This month, UK Seabed Resources, a newly-formed subsidiary of US defence and engineering group Lockheed Martin, became the latest company to join the rush for polymetallic nodules (PNs) – small rocks rich in manganese, rare earths, nickel and cobalt – from the sea floor, when it obtained a licence to explore a 58,000 sq km area of the Pacific Ocean.

Speaking in London, Prime Minister David Cameron said the firm, along with the Department for Business, Innovation and Skills, will help the UK position itself at the forefront of the industry, which could be worth £40bn to the British economy during the next 30 years.

It’s not the first time Lockheed has spearheaded an effort to recover PNs from the seabed – the group claims to have discovered mineral riches off the US coast after a bizarre hunt in the 1970s for a lost Russian submarine paid for by US billionaire Howard Hughes. But the dash for deep-sea metals ended when commodity prices imploded.

From the early 2000s, a sharp rise in prices, combined with a dramatic increase in demand for metal; a decline in the tonnage of land-based nickel, copper and cobalt sulphide deposits; and technological advances ‘rekindled’ an interest in the exploitation of PN resources, according to a new technical study published by the ISA.

Equally important is the impact of Papua New Guinea granting the first deep seabed mining licence, in its territorial Bismarck Sea, to the Nautilus Mining Company of Canada in 2011, the study notes.

"This has demonstrated that the private sector, and the financial institutions that support it, believe that deep seabed mining can be commercially viable."

China’s monopoly on the global production of rare-earth minerals – and its decision to restrict exports in 2009 – has also fuelled the search for the raw materials, essential for electronics, from non-terrestrial sources.

In March 2013, Japanese scientists from Tokyo University and Japan’s Agency for Marine-Earth Science said they had found vast reserves of highly-concentrated rare earth metals on the Pacific Seabed.

Professor Yasuhiro Kato said a single ship drilling in a target zone close to the island of Minami-Torishima could meet Japan’s demands for a year. "We don’t need to mine it intensively," he said. "All we need is enough to force China to lower its prices."
The number of exploration licences issued now stands at 17, with Japan, Korea, China and France prospecting minerals in the Pacific, Atlantic and Indian Oceans.

But with the first contracts due to expire in 2016, the ISA is looking towards the development of a regulatory framework for PN exploitation.

In July 2011, the Council of the ISA requested during its seventeenth session that the ISA Secretary General prepare a work plan for the formulation of regulations for the exploitation of PNs from the ocean floor, known as ‘the Area’.

In complying with this request, the ISA faces the challenge of developing a framework that ensures sustainable exploitation of seabed mineral resources.

"The ISA faces the challenge of developing a framework that ensures sustainable exploitation of seabed mineral resources."

In its technical study published this month, the authority recognises the "inevitable environmental damage" mining will cause, but addresses the need to analyse "all environmental data" collected during exploratory projects to date, to aid an understanding of the environmental impact of all aspects of exploitation.

Activists including ‘Kiwis against Seabed Mining’ believe that suction dredging akin to open-cast mining, where the entire top surface of the seabed is removed to depths of up to 20 metres, will wipe out organisms, including mussels, worms and crustaceans, which in turn support larger marine animals in the food chain.

Many would-be PN exploiters, however, are developing remote controlled technologies designed to minimise the stirring up of fine particles from the seabed.

"Potential approaches include outfitting the nodule collection apparatus with skirts and water flow designs to minimise fine particle disturbances and ensure that any stirred up particles are pumped up the pipe with the nodules and not released into the surrounding water," explains UK Seabed Resources spokesperson Philip Rood.

"Overall, minimising environmental impact is a core objective in the nodule collector design and will be a key factor in how the apparatus moves, collects nodules and transfers nodules to the surface."

The ISA also recognises the need for mining regulations and standards to benefit ‘mankind as whole’ and that host country policies do not give an unfair advantage to commercial exploiters.

It is hoped that the industry will learn from decades of negative social impacts from terrestrial mining operations, where legislations have given states free controlling stakes in mineral projects and corrupt government officials have frittered away mining profits at the expense of the wider public.

"The ISA also recognises the need for mining regulations and standards to benefit ‘mankind as whole’."

Papua New Guinea was one of the first countries to issue an exploration licence for companies to address the feasibility of resources development in its exclusive economic zone, but corrupt rent seekers in the country have long prevented ordinary citizens from benefitting from minerals and metals extracted onshore, according to the Human Rights Watch.

Adding fuel to the fire, maritime territorial disputes previously reserved for oil deposits could also be opened up, as miners begin to unlock mineral resources from the seabed.

The ISA has only scratched the surface of what may be involved in preparing a fiscal policy that would set fiscal rates based on comparable land-based minerals, identify a tax and cost accounting code on which fiscal calculations can be made; and develop a system that does not burden the ISA or mining investors.

The authority hopes to ensure that whatever resource rent legislation is adapted is simple, equitable and transparent. But the implementation of such regimes may be too big a challenge for certain governments.

For now at least, a rough framework for the extraction of polymetalic nodules is in place, and extensive exploration efforts by the industry may soon begin to pay off.

The remote peninsulas of Western Australia have some of the most important mineral sand deposits in the world, but they also play home to some of its most fragile ecosystems.

Copper’s up, gold’s down, and oil and rare earth metals could swing either way in 2013. Here are our picks of the top commodities to watch as the global economic recovery gets underway.