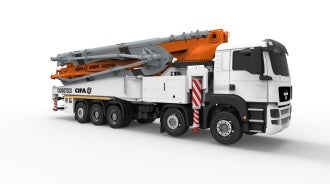 CIFA has continued to widen its CARBOTECH range of truck-mounted pumps that feature new and performing materials for longer booms and weight limits.

CIFA will introduce two more models to the public at Intermat Paris 2015: K53H and K60H, bringing the CARBOTECH family from four to six models.

K53H and K60H can be mounted on four and five-axle trucks. If mounted on four axles, the limit is 42t and 44t respectively. For both models, the weight limit is widely respected to allow users to load accessories, water, diesel etc. without breaching circulation rules and/or special permits and/or technical limits of vehicles.

Assembly on five axles allows an optimal load distribution on single axles, to enable circulation in countries where regulations are stricter.

K53H has a 53m boom made of five sections (the final two in carbon fibre) with RZ folding system.

K60H has a 60m boom made of six sections (the final two in carbon fibre) with RRZ folding system.

Both versions mount the new and performing HP1808ECX closed circuit pumping unit with maximum capacity of 180m³/h, 83 bar max pressure, 260mm concrete cylinders, which reduce the number of maximum cycles per minute to 27.

The standard set-up for these models, as well as for the entire CARBOTECH range, is particularly rich in accessories: in addition to the advanced management system via SMARTRONIC display, with stability and diagnostic control, it stands out for double thickness pipes CIFA long-life pipes, stabilisation studied and designed according to the boom length.

CIFA, leader for over 20 years in the world of tunnels and underground works, presents the new CST 8.20 (CIFA Telescopic Shotcrete) designed specifically for...

Cifa is the designer and manufacturer of the award-winning Coguaro4 truck mixer for mining operations.