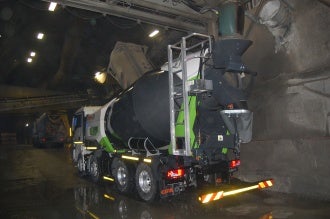 Cifa staff travelled to Switzerland to Sigirino (canton of Ticino) in the Ceneri base tunnel, a part of the New Transalpine Railway (NFTA) to see the Energya truck mixer in operation. The site represents the second biggest tunnel project in Switzerland.

Staff waited for Energya in one of the many ramifications of the tunnel, and then went along with it up to the plant where, with comings and goings of trucks and mixers, it waited its turn to reach the loading point.

Then, for 5km, the drum mixed concrete equipped with firefighting fibres up to the pumping zone, where it unloaded material into the hopper of a stationary pump that, through pipes, pushed it to the formworks for spaying walls and top.

Bellucci told Cifa that Energya: "Can be summed up in three main advantages: less consumptions, less pollution and less noise".

Cifa staff noticed that using electricity only during distribution of concrete, the truck does not give off harmful emissions and it works silently, complying with anti-pollution regulations.

This is possible as the Energya series with the two models E8 and, as in this case, E9 mounted on a four axles Man chassis, with 9m3 plant capacity, is characterised by a new system of energy supply onboard, with a lithium battery that acts on an electric induction engine directly fitted on the rotating drum that is so moved, avoiding the traditional hydraulic device that moves drums of traditional truck mixers. Therefore, offers the advantages of traditional and electrical technology.

Plug-in hybrid means that batteries are rechargeable both from the electricity grid of the construction site when the machine is not working, and from an onboard power unit during transfer of the machine: a special system called kinetic energy recovery system (KERS), allows to recover energy during deceleration, used as ‘green stock’ during pumping to avoid polluting the air (zero emissions) and work without annoying noises.

"This new technology is an important step forward," Bellucci added.

"Indeed for traditional truck mixers and other machines, regulations concerning smokes emissions are very strict and controls have regular frequency."

Positive opinion was also heard from Domenico Allegri, an operator of Consorzio Condotte Cossi, who has been driving Energya for about one month now. He specifically highlights the effectiveness of the automatic drive and absence of noise during pumping, essential for those who work close to the machine.

Bellucci said that: "Consorzio Condotte Cossi has always been customer of Cifa, a brand of quality and reliability, and the vehicle fleet, in this kind of tunnel jobs, is constantly put to a hard test."

Maintenance of machines is managed directly by the company, that only purchases spare parts from the parent company, while concerning pipes for mixer pumps it turns to Valme.

Promotion of this machine therefore goes on so that potential customers can see firsthand its advantages and innovations. In this underground construction site Energya will be put to a hard test, but since its arrival, it’s letting its light shine.

CIFA, leader for over 20 years in the world of tunnels and underground works, presents the new CST 8.20 (CIFA Telescopic Shotcrete) designed specifically for...

Cifa is the designer and manufacturer of the award-winning Coguaro4 truck mixer for mining operations.