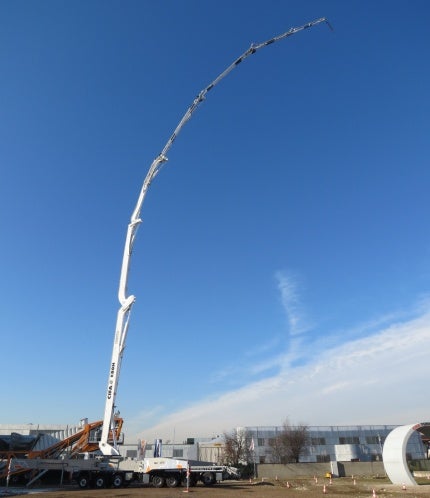 The new CIFA K80H Carbotech pump was delivered to the Pompbet company on 5 December 2013. A special event was held at the CIFA headquarters, in the presence of international trade press.

Owner, founder and director of Pompbet Dariusz Strębski was proud that no other European company would have such a tall pump in its fleet.

"I am very proud having purchased this concrete pump, not only because it is the tallest ever sold in Europe, but because it is a ‘high technology’ machine, and it can travel without difficulty not only in Poland but throughout Europe," Strębski said.

Pompbet has pumping at high altitude in its DNA and this new machine will be a showpiece for its work.

"This is a machine particularly suitable for large infrastructural works that will start shortly in Warsaw. Obviously, the use will not run out with this project and we are certainly willing to rent the pump K80H for construction sites around Europe," Strębski added.

The event was also an opportunity to release some figures about CIFA’s activities in the last year. Director of sales and after-sales Daniel Metivier said that CIFA’s current year will close with a trend in-line with 2012, the year in which it achieved its best turnover.

"We have done so many extraordinary actions that we will ensure a growing business in the next years: the opening of branches in France and Germany, the creation of internal structures such as CIFA Academy for the training of operators, and the TEC (European Testing Center) for an avant-garde research and development, in addition to the new concept of the ‘lean’ production," Metivier said.

Metivier said of Mr. Strębski: "It’s a customer extremely professional and an entrepreneur who knows what he is going to buy and why. Pompbet has bought for the first time a CIFA machine and we hope to continue to have him among our customers."

"We considered Pompbet a key customer and then the deal was followed and finalised directly with the Strębski staff, which also include Dariusz Dębowski. However, CIFA in Poland continues to be represented by Tarbi, a dealer we have been working for years with and he has always demonstrated its professionalism in sales and post-sales service."

Cifa staff travelled to Switzerland to Sigirino (canton of Ticino) in the Ceneri base tunnel,...

Cifa is the designer and manufacturer of the award-winning Coguaro4 truck mixer for mining operations.The...

CIFA has continued to widen its CARBOTECH range of truck-mounted pumps that feature new and...