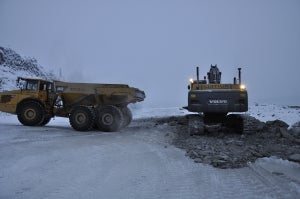 LKAB, one of the largest mining companies in Europe, uses Volvo Construction Equipment machinery to support the excavation of its vast iron ore pits around the globe.

The production of iron ore is a tough business but also an increasingly prosperous one. Thanks to rapid growth in China and other developing markets, the demand for ore – critical to making steel – is rapidly on the rise. Globally, 1.8 billion tons of iron ore were extracted in 2011, and that amount will increase by an estimated 10% this year.

Extraction giant LKAB has launched its own growth project; called LKAB 37 with a goal to expand its production capacity to 40 million tons by 2015. LKAB is an ambitious sharp player in the market, with the ambition to grow in the global iron industry and is set on delivering more of the precious mineral to meet the demand of its customers – which means it will need more machines and equipment to support its expanding capacity.

To aid this vital activity, Volvo CE machines play an essential role in the newly-opened Gruvberget open pit mine in Svappavaara – a mining village situated within the municipality of Kiruna, Sweden.

"We use Volvo CE articulated haulers and motor graders to move excess debris, dig around the mine and clear haul roads," says Peder Nensen, general manager of the growth project at LKAB. "We also use Volvo wheel loaders and excavators on the access roads to transport the iron ore and support our production."

Keeping up with demand

"In Sweden, there are about 50 mining projects in total including LKAB’s developments," adds Nensen. "Work has begun on four of our projects, and the rest are in the planning stage. We are very close to opening another pit in Sweden."

LKAB’s next two Swedish mines, Mertainen and Leveaniemi, are scheduled to open during 2014-2015. These two mines as well as Gruvberget will account for an estimated 25% of the total output in 2015.

"We run the operation around the clock throughout the year and handle the loading of ore and specialty products for LKAB," says Ronny Nylund, site manager at Cliffton. The Gruvberget mine is 450 meters long by almost 350 meters wide and plunges to a depth of 130 meters below the surface.

"Volvo machines provide a good environment for the drivers, produce very little noise and have low fuel consumption," adds Ronny. "We are very impressed with the machines and are glad to have them with us on the mining sites."

LKAB also has mines operating in Kiruna and Malmberget in Sweden, which is where the company has been mining iron ore for more than 120 years. To date, more than one billion tons of iron ore has been mined. In 2013, a new main haulage level at 1,365 meters will be operational securing the mining operation for an additional 20-30 years, so it’s a good job that Volvo’s long life machines can go the distance.

The F-Series articulated haulers set high standards in the market that Volvo created and continues...

Designed to match the needs of on-highway trucks, the L250G is purpose built to be...