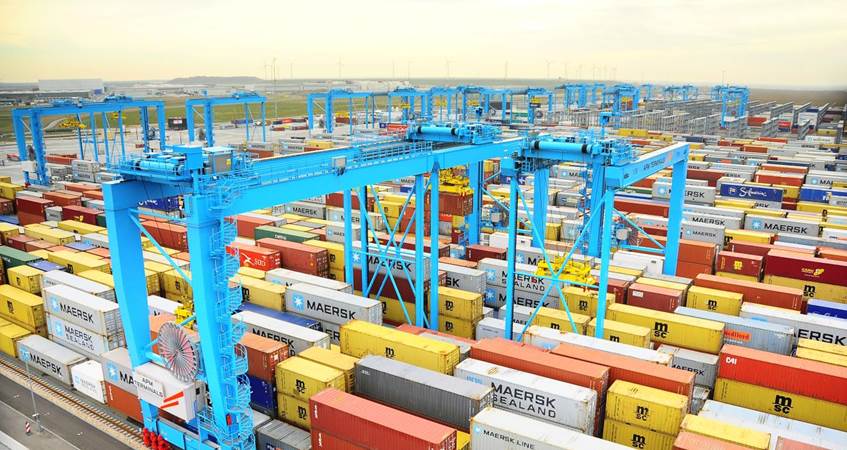 After successful ASC projects in Hamburg and Rotterdam, Künz was able to fend off strong international competition and was awarded with the order to deliver 32 ASCs to a new automated terminal in the Port of Tangier, Morocco. The customer, APM Terminals, is one of the most important operators of sea terminals worldwide.

In a terminal such as this, large ships are loaded and unloaded using ship-to-shore cranes. In the stacking area, all incoming and outgoing containers are temporarily stored before being loaded onto trucks or other vessels for further transport. The stacking area in Tangier is organized into 16 storage blocks, with each block being operated by two fully automated ASCs from Künz.

Apart from cranes for the intermodal container handling, automated stacking cranes have emerged as a bestseller for Kuenz in recent years. A total of 100 stacking cranes from Kuenz are currently in operation in Hamburg and Rotterdam, with almost 20 more in the process of being commissioned. With the new order in Tangier, Kuenz container cranes will be installed in Africa for the first time.

A subsidiary of the Maersk Group, APM Terminals is one of the world’s leading port operators. “The main reason for the latest success in Tangier was the high satisfaction of the customer with the cranes in Rotterdam,” says Guenter Bischof, CEO of Künz.

APM Terminals MedPort Tangier is a greenfield project, similar to the Port of Rotterdam. According to the tight time schedule, the terminal will go into full operation in the first half of 2019.

An additional key to Künz’s success is an entire new generation of stacking cranes. In contrast to the traditional construction, the main beams of the new cranes are designed with a round girder. This aerodynamic main girder design results in a number of advantages for the operator. A lower wind attack area requires less drive power, which leads to lower energy consumption and reduces dynamic forces on drive wheels, crane tracks and civil works.

Founded in 1932, Künz is an Austria-based crane manufacturer. The company offers innovative and efficient solutions for container handling in intermodal operation and automated stacking cranes for port and rail yard operations.

Today, Künz is the market leader in intermodal rail-mounted gantry cranes in Europe and North America. While the group’s headquarters is located in Hard, Austria, additional fabrication facilities are located in Gross St. Florian, Austria, and Kechnec, Slovak Republic.

Künz America in Raleigh, NC, is the group’s sales and service organization in North America.

Künz has been awarded by Bane NOR for the delivery of two brand new semi-automated...

42 Künz ASCs in full operation at TM2 in Morocco

In 2016, Künz stood out amongst strong international competition and was awarded a contract with...

KT-Infrastrukturgesellschaft GmbH & Co. KG is in the process of rebuilding the existing terminal in...

Künz Enters the US RTG Market