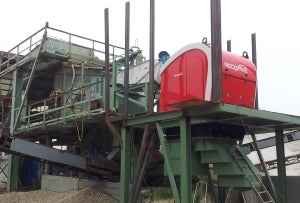 Feichtinger KG is a private company from Esternberg (Upper Austria) and provides approximately 30,000t of quartz a year to the RW silicium GmbH. The company has been active in the mining of quartz since 1972 and currently employs 18 staff. In addition to this, Feichtinger KG is also involved in riding arena construction (www reitplatzbau.at).

Due to increasing customer demands it became necessary to sort out impurities (the green and red stones) in high quality quartz. Consequently, Feichtinger KG issued a tender request in 2012 for the elimination of these contaminants through a sensor-based sorting machine. This resulted in several successful sorting trails being conducted by BT-Wolfgang Binder in collaboration with the customer.

The owners of Feichtinger KG, Joachim and Fritz Feichtinger, commented: "We have been very impressed with the REDWAVE technology and the existing established system at Leube, and we are very pleased with the sorting equipment."

The Redwave mineral sorter has been developed for the sorting and handling of different minerals to improve the quality. Identification and sorting of various minerals,...