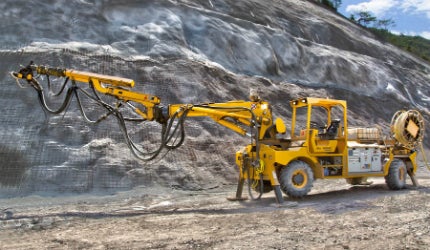 The Ruta del Sol is considered one of the most important infrastructure project in the history of Colombia, connecting the interior of the country with the Atlantic coast.

The project was initiated in June 2010, with an investment of $2.6bn for the construction of 1,100km new two-lane roadways complying with the highest security standards.

Colombia will benefit from this project by increased competitiveness and proximity between the regions. Due to its large dimension, the project was divided into three sections.

Sector one has a length of 78.3km, beginning in the Corredor de Villeta (approximately 100km from the capital Bogotá) and traversing the mountain chain El Korán 7km north of Puerto Salgar.

Sector two is the longest section (528km), situated between the Corredor Puerto Salgar and San Roque. Its construction began in May 2011.

Sector three is comprised of two road corridors, the San Roque – Ye de Ciénaga, which closes the connection of the inland with the coast, and the corridor Carmen de Bolívar – Bosconia – Valledupar. Construction began in June 2011 and spans approximately 465km.

HELIOS consortium working with Putzmeister and IMOCON in sector one

The Colombian consortium HELIOS, in charge of the construction of section one, was founded in 2009 in equal shares by the companies Constructores SA, Constructora de Concreto, Carlos Alberto Solarte, and the Colombian branch of IECSA.

All the companies have a broad and acknowledged experience in the construction field.

Construction of sector one began in December 2011 and although it is progressing very fast, it is still in process. This sector is divided into two sections:

This involves the construction of two parallel one-way tunnels. The first tunnel has a length of 2.180m, while the second has a length of 960m, interrupted by a small above-ground section which crosses the San Francisco river. Section two is divided into two subsections:

The Putzmeister equipment is supported by the service guarantee of Putzmeister´s partner in Colombia, IMOCOM SA, a leading company for the commercialisation of construction machinery with more than 60 years experience.

In order to avoid premature deterioration and ensure efficient and safe operation of the equipment, daily preventive maintenance and cleaning is essential. Therefore an IMOCOM after-sales service team is always on site.

The SPM 500 WETKRET series has proven its efficiency and reliability in a large number of tunnelling projects worldwide.

In Colombia it was used in the tunnels of the Loboguerrero highway, which improves the mobility towards the Pacific and is used to transport 45% of the freight that is imported and exported through the principal port.

The SPM 500 WETKRET spraying equipment features a telescopic spraying arm with a maximum vertical reach of 17m and a concrete flow of 30m³ / h, suitable for medium and large-sized tunnels.

Since the beginning of the construction work at Ruta del Sol, 9,872m³ of shotcrete has been sprayed in section one, and 18,828m³ in section two during an average of ten daily working hours.

The shotcrete mixture includes metallic fibres; as well as aggregates with a maximum size of 1in. Additionally, due to the high temperatures, the use of ice is necessary.

The chassis of the SPM 500 WETKRET series is designed to work in the toughest tunnelling conditions in tunnelling. The four-wheel driving and steering capability with crab mode increase its manoeuvrability, making it possible to work in areas which are difficult to access.

The equipment also features an automatic system for high-precision synchronisation between the concrete pump and the additive dosage unit, assuring spraying accuracy and quality.