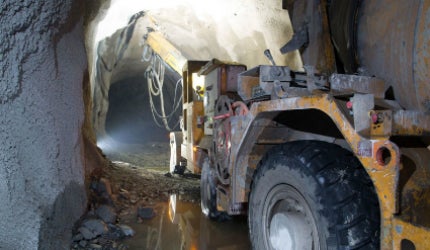 The Rasvumchorr underground mine is situated 14km East of Kirovsk, a town of approximately 30,000 inhabitants located in the Khibiny Mountains of the Kola Peninsula, in the Murmansk region of northwestern Russia, adjacent to Finland and Norway.

The underground mine, operational since 1956, is owned by the mining company Apatit Joint Stock Company, one of Russia’s main producers of phosphate raw materials for fertilizer manufacture both in Russia and on the international level.

The company extracts apatite-nepheline ore from mines around Kirovsk and separates the apatite and a nepheline concentrate at two processing plants.

A single apatite deposit, lying within +1,050m to -650 m above / below sea level, contains the Kukisvumchorr, Yuksporr, Apatite Circus and Rasvumchorr Plateau orebodies.

The Rasvumchorr underground mine extracts ore from the Apatite Circus. The Central open-pit mine on the Rasvumchorr plateau was opened in 1964, exploiting ore which was typically half as expensive as ore from any other mine.

From 1980 to 1990 this mine yielded 23 million to 28 million MT of ore annually, as much as four Apatit JSC mines today. Because only 10% of the reserves remained available for surface mining, during the past 10 to 15 years the depth of mining operations has been increased by 150m to 200m.

In the new economic circumstances of the 1990s the company decided that the highly mechanised sub-level caving method used at the Kiruna mine in Sweden should be adopted in its mining operations. Fully mechanised largescale sub-level caving started in 1998 to 1999 and the conversion process still continues.

Progress at the Rasvumchorr mine is making an important contribution to Apatit’s growth in underground output. Operating in difficult conditions within the virtually exhausted upland part of the Apatite Circus orebody, the mine has increased ore output by 2.5 times.

This has been achieved by mining reserves in the barrier pillar between the Apatite Circus and Rasvumchorr Plateau orebodies, at the interface with the central open-pit mine.

In 2009, Apatite JSC completed the reconstruction of the transport system on Level +422m, which allowed output to rise to 3.6 million MT/y in 2010.

In the future, Rasvumchorrr can be used to access reserves remaining below the central open-pit.

KMO spraying concrete with Putzmeister equipment at the Rasvumchorr mine

The subcontractor JSC KMO Kirovsk works with a Putzmeister SPM 4210 WETKRET concrete spraying system and a low-profile concrete mixer for mining, Mixkret 4, at the Rasvumchorr mine.

The SPM 4210 WETKRET series features a spraying arm with a vertical reach of 10m and a double-piston concrete pump with a maximum output of 20m³ / h.

The proportional remote control (dual use radio/cable) permits full regulation of the concrete output as well as adjustments to the predefined additive dosage, facilitating the operator’s work in changing working conditions.

The equipment is mounted on an articulated four-wheel-drive, four-wheel steer chassis with heavy-duty axles and a reinforced turning system, suitable for working under the toughest mining conditions.

It is equipped with an automatic dosing device synchronized with the concrete flow, thereby assuring spraying accuracy and quality.

Another important component of the concrete spraying process is a suitable trans-mixer for transferring the shotcrete mix from the batching plant to the spraying machine, one of its main functions is to ensure that the mix does not segregate during transportation.

The low-profile concrete mixer for mining Putzmeister Mixkret 4, with a concrete capacity of 4m³, offers a compact design with heavy-duty axles, both directional and powered.

Thanks to the integrated continuously variable drive (ICVD) system without gear shift, the motor power is fully used at all times without interruptions of the tractive force, increasing comfort for the driver. The equipment optionally includes an additive discharging system.