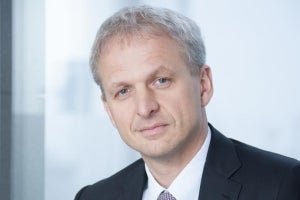 The Sulzer board of directors has appointed Greg Poux-Guillaume, president and CEO of Alstom Grid, as their new CEO, effective 1 December , 2015.

Frenchman Greg Poux-Guillaume, 45 years old, was also a member of Alstom’s executive committee. He has extensive global experience in many of Sulzer’s key markets, particularly the oil, gas and power markets, and a strong track record of leading restructurings and building global businesses.

Greg Poux-Guillaume was president and CEO of Alstom Grid, a four billion euro business with 20,000 employees, from 2011 to 2015. During his tenure he transformed the business and repositioned it for profitable growth in a challenging market environment.

From 2009 to 2011 he was senior managing director of CVC Capital Partners, and from 2003 to 2009 he held various positions within the Alstom Group, including CEO of Hydro Power Plants and CEO of Environmental Control Systems, where he significantly accelerated business growth and improved margins. Before joining Alstom, he worked for Softbank and McKinsey, and held various positions at Total Exploration & Production. Greg Poux-Guillaume has worked in the UK, Angola, Myanmar and France. He studied Mechanical Engineering at the École Centrale in Paris and graduated with a Master of Sciences degree. He also holds an MBA from Harvard Business School.

Peter Löscher, chairman of the board of Sulzer, said of the appointment: "The board of directors is very pleased that Greg Poux-Guillaume is joining Sulzer as its new CEO. He brings a comprehensive knowledge and broad understanding of many of our key markets, particularly in the oil and gas market and the power industry. He has a proven track record of leading turnarounds and building successful, profitable businesses in challenging environments. These skills will be crucial as we strategically transform Sulzer and position the company to achieve its full potential while improving profitability and operating margins. The board is convinced that with Greg Poux-Guillaume’s leadership and experience, Sulzer will become a truly market-focused, industry-leading company that creates significant value for its customers, employees, and shareholders.

Greg Poux-Guillaume commented: "I am deeply honoured to join a company of the stature of Sulzer. Its rich history, solid businesses and talented teams are the perfect building blocks for the transformation initiated by the board of directors and the executive committee, and which I look forward to leading and accelerating."

Greg Poux-Guillaume will take over as Sulzer’s CEO on December 1, 2015. Thomas Dittrich, interim CEO since 10 August, 2015, will return full-time to his role as CFO. The board of directors would like to thank Thomas Dittrich for his leadership and excellent work during his time as interim CEO.

Rely on our Material Competence for your Demanding Industrial Processes

Our customer-focused R&D and continuous research on new material options enable us to develop equipment with a strong resistance to corrosion and wear.

Wherever there are chloride solutions, such as sea water, bleach or oxidising salts e.g. ferric chloride and cupric chloride, pitting and crevice corrosion can occur.