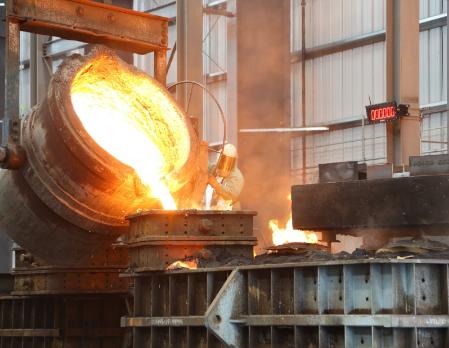 Employees at GIW Industries celebrated the ‘inaugural pour’ at the newly completed state-of-the art foundry in Grovetown, Georgia, 16 May.

Getting this massive facility up and running has taken years of hard work and careful coordination.

"We didn’t work in a silo," explains Richard Sterzen, GIW Industrial engineering manager and project lead for the new foundry. "Everyone did their part, from the KSB board down to the hourly workers, to make this project a success."

Now that it’s officially online, we can confirm that it’s just that, a success.

The newly expanded foundry is the top white-iron foundry in the world, boasting cutting-edge equipment, excellent safety features, and enough space to efficiently move, assemble, and store some of the largest pumps on the planet.

Not only is this beneficial for the company as a whole, now that we can ramp up production to meet the mining industry’s growing demand for super pump, but it’s also helping with efficiency and safety.

"Before the new foundry was complete, we were having to do a lot of workarounds in our original facility to accommodate the larger pumps," Sterzen says. "We were using two cranes just to lift the 60t moulds, and once they were filled and weighed up to 125t, we had to take them apart to move them."

The new foundry has made these workflow and space issues things of the past.

"Now we can convert the original foundry back to creating the size parts it’s intended for, which will make it cleaner and safer for everyone," Sterzen adds.

As remarkable as the new foundry is on its own, it’s all the more impressive considering it wasn’t the only huge project happening at GIW.

"While Rich and his team were embarking on one of the largest construction projects we’ve ever done, we were also implementing SAP," says Keith Milburn, GIW Plants Manager. "It was a very challenging time that pulled a lot of key people in different directions."

However, the GIW team is noticing success in both areas: Not only are they starting to see tangible benefits of the SAP implementation but they also wrapped up the $40 million foundry project on time and on budget.

"It definitely stretched our abilities as a company, but at the end of the day, it proved to us that we have the ability to pull off multiple projects at the same time," Milburn says.

As Milburn notes, GIW decision-makers’ commitment to these projects served as another excellent benchmark in the relationship with KSB.

"GIW has a good rapport with our parent company, KSB," he says. "Even with a downturn in the market, they know there’s still a certain amount of growth we have the potential to hit and they’re still willing to invest in our business."

Looking to the future

Whatever investments and changes are in store, Sterzen, Milburn, and the entire GIW team will be ready. Although everyone is focused on making each subsequent pour at the foundry as successful as the first, they’re also looking beyond the celebrations and planning for new ways to maintain GIW’s leadership role in the pump industry.

At GIW, we’re always working to help our customers achieve their maximum production potential. We...

What is Vane Pass?

Pumps experience a wide variety of pressures and loads during operation, and it is important...

Solutions for the Petrochemical Industry

With decades of experience as suppliers to the petrochemical industry, as well as in the...

To mark GIW Industries' 128th anniversary, we are proud to announce a $42.2 million expansion...