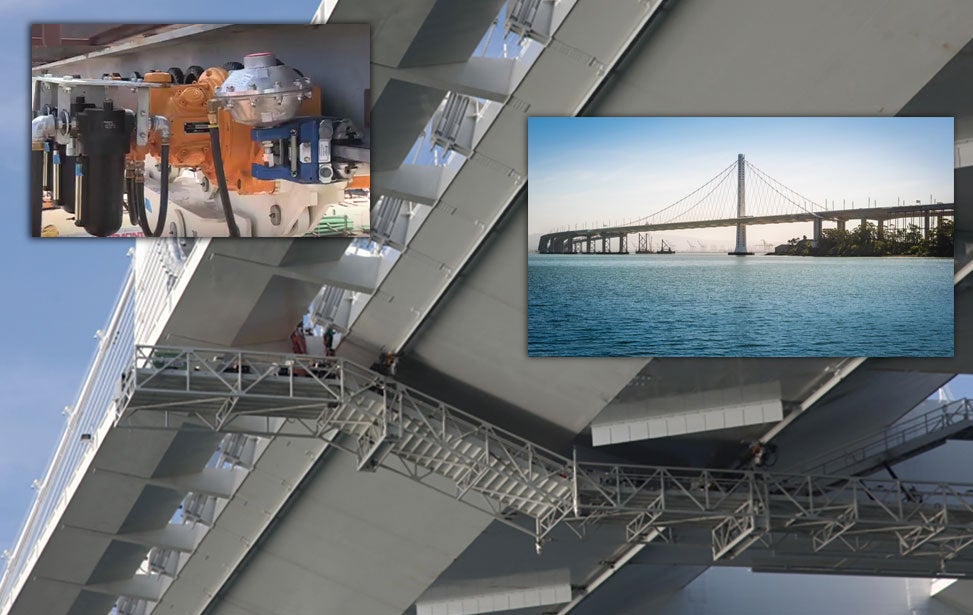 The San Francisco-Oakland Bay Bridge is comprised two equal length sections that carry 240,000 vehicles a day. After more than ten years of construction, the new 2,047ft-long East Span of the bridge opened to traffic in 2013. This single-deck span features eastbound and westbound lane sections, positioned side-by-side. The bridge requires regular ongoing maintenance, including painting to protect against corrosion, to ensure it reaches its planned 150-year useful life.

Four large, moving scaffolds, called travelers, were designed and installed on the underside of the East Span’s four main sections. The largest traveler is 20ft-tall, 16ft-wide, and 119ft-long. A smaller fifth traveler also was installed under the 15.5ft-wide pedestrian/bike lane. These moveable platforms allow crews safe access for routine bridge inspections, painting and repairs. They also are designed to prevent sandblasting grit, paint chips and overspray from falling into the Bay below.

The travelers, designed to withstand high winds, can move 20ft/min going west and 50ft/min heading east. They ride on two steel I-beam tracks and are powered by air compressors positioned on both ends of the span.