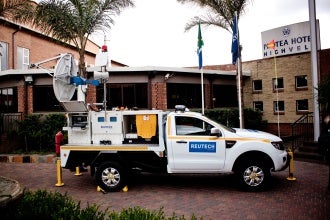 Anglo Coal’s Landau Colliery has recently expanded their movement and surveying radar (MSR) fleet with the addition of a number of MSR 060Vs.

The MSR range is manufactured by Reutech Mining and provides precise, real-time and round-the-clock surveying and slope movement measurements in the highly demanding and often extreme mining conditions around the globe.

The MSR 060V is the latest addition to the MSR range. It is a compact, vehicle-mounted and has an operating range of 600m.

The delivery of the first system was marked with a technical handover session, hosted by Reutech Mining at the Protea Highveld Hotel in Witbank, South Africa.

The event served as a platform for the leading role-players in the mining and geotechnical fields to discuss technology training courses in order to provide more effective support.

Landau Colliery general manager Vijay Kumar said: "Reutech Mining offers a proudly South African product that provides a real-time immediate alarm within the pit, and we are very impressed with the quality of the after-sales service."

Presentations by Anglo American rock engineering manager Gift Makusha and principal rock engineer Des Mossop provided a platform for discussions regarding the advances made within radar technology in the slope stability monitoring fields.

"Using the radar allowed mines to perform tactical monitoring and to mine areas that would have been disregarded historically," said Mossop, emphasising the importance of this technology in the modern mining environment.

Mr Makusha stated that he was very impressed with the manufacturing design concept of the MSR060V, and recalled that he was instrumental during the early production phase in consulting with clients.

Anglo American principal surveyor and long-time friend of Reutech Mining, Huw Thomas, commented that Reutech always keeps up with the latest technology and pays attention to their clients’ requirements.

"Reutech Mining believes that continuously improving and developing our technology and staying ahead of the pack is only made possible if clients, users and other stakeholders are included in all aspects of the development and design period," said Reutech Mining executive Jan de Beer.

He further stated that the success of the initial delivery of the MSR060V to Landau Colliery has allowed other collieries and Anglo Coal sites to follow suit, and that the MSR060V has been specifically designed with the coal mining industry in mind to allow ease of use in conditions where access and space is limited.

"With Anglo Coal being the first mining group to adopt the original MSR technology on the New Vaal Colliery in 2006, and subsequently on many of their other sites, this occasion is truly indicative of the valued relationship between Reutech Mining and Anglo Coal and we look forward to what the future holds together," said de Beer.

Reutech Mining is a division of Reutech Radar Systems, a company within the Reunert Group. Reunert Limited is listed on the Johannesburg Stock Exchange and has an annual turnover of around R11bn and employs almost 7,000 people.

The Reutech Mining family got together recently to celebrate the birth of the 100th MSR.With...

Daily operations on mines have become crucially dependant on the reliability of the equipment used...