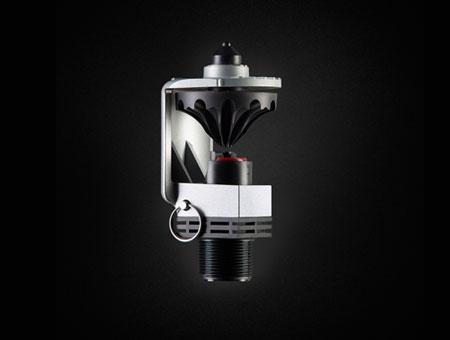 The R55A End of Pivot Sprinkler is changing the way farmers irrigate with centre pivots. It can be used to pick up added acreage both throughout the full revolution of the pivot or just in the corners, depending on site specifics and irrigator preferences. It can be used in conjunction with a higher volume Big Gun® sprinkler or on its own.

The R55A is to be mounted in an upright position at the end of the overhang. It can always remain on, turn on via a solenoid on an 800 series valve or work under the logic of a linked control system with a SR100/800P valve or SRNV100 (nozzle valve).

This part-circle, multi-stream sprinkler operates under the same principles of other Rotator sprinklers. The R55A has a braking mechanism that controls the rotation of the sprinkler plate. The highly engineered plate geometry turns the water flow into multiple streams.

Optimised, wind-fighting droplets project out far, while gentler droplets fall in near, filling in the water pattern. Water hitting the plate drives the rotation while the rotator brake maintains a uniform speed. Possibilities abound as irrigators around the world see this new end of system advancement.

Visit the company website for more information. The factory can be contacted for specific mounting figurations and logic drawings.

Nelson Irrigation Corporation has a full line of water application solutions are ideal for dust and debris control in industrial settings.