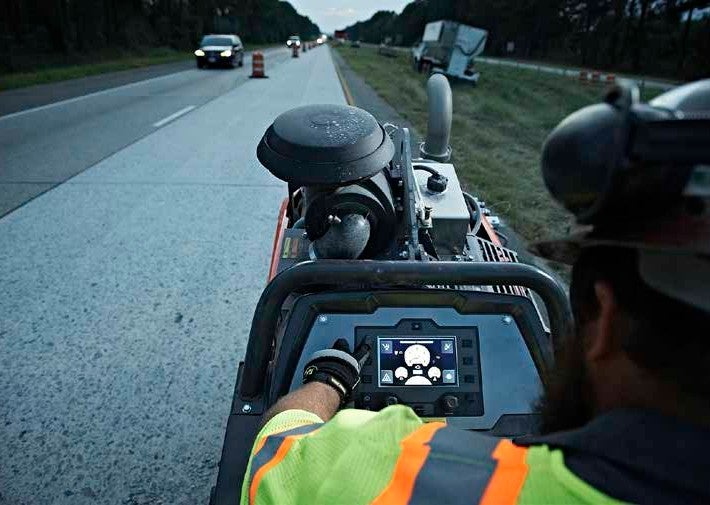 In the roadbuilding industry, new legislative and environmental demands are emerging fast. When Husqvarna started developing the successor to the renowned flagship floor saw FS 8400 D, the aim was to cut emissions and boost productivity at the same time. A major challenge that yielded excellent results.

Since the launch in 2006, Husqvarna FS 8400 D has earned a good reputation among roadbuilding contractors and shiftworking operators for its sturdy design and reliable operation, enabling high production rates. For six years in a row, FS 8400 D has been awarded the Roads & Bridges magazine’s Contractor’s Choice Gold Award.

A challenge for the development team

So, when given the assignment to design the successor to this famous flagship, the development team at Husqvarna realized they faced a real challenge. Now the new emission regulation EPA Tier 4/ Euro Stage 3B topped the list of requirements.

The starting point for the team was, quite naturally, to investigate if the engine could simply be replaced with a new cleaner one, whilekeeping the old base plate, transmission, cooling system and operator’s interface. For several technical reasons, however, this alternative was abandoned quite early in the development process. And to be honest, the industry has made considerable advances in both engine technology and product design since the days of premiere for the FS 8400 D.

Equipped with a highly efficient transmission, it delivers 50 kW to the blade shaft with a sustainable torque of 260 Nm, close to the peak torque of FS 8400 D but at a lower RPM.

At this stage, the development team decided to build a test prototype based on FS 7000 D on a new, longer base plate equipped with a heavy-duty blade shaft, capable of running blade sizes up to 1500 mm. This made it possible to optimize the weight distribution for even greater productivity: maximizing the pressure on the blade and drive wheels would utilize the torque optimally, while minimizing the lifting weight on the handlebars would make handling quicker and less strenuous for the operator.

The concept looked promising on paper, but how would it perform in reality? The field testing of the prototype began, including benchmark tests running the prototype side-by-side with an FS 8400 D. Soon, loads of test data were collected in spreadsheets and diagrammes to reveal the naked truth: The prototype was performing equally well to FS 8400 D, both with 1,500mm and 1,000mm blades.

Fast from prototype to production

Analyzing the field test results, it became clear for the development team that their goal was achieved: This was a worthy successor to Husqvarna FS 8400 D. And with a prototype built on many proven components that were already in production, time to market could be minimized. Today, in the autumn of 2016, the new flagship of floor saws is ready for launch under the name Husqvarna FS 7000 DL (L for Longer base plate).

A large floor saw for the future

"All this adds up to a more convenient and healthier working environment and higher production rates in the toughest conditions, not to mention the positive long-term health effects," explains Erik Edvardsson.

"Efficient infrastructure is one of the global key issues for the future growth of the emerging mega-cities as well as for the society as a whole," says chief product engineer Erik Lundberg, head of the development team.

"Being able to renovate and rebuild roads, bridges, airports and ports without interfering too much with the traffic flow is a crucial success factor. This is where this efficient and reliable floor saw will play an important role," he concludes.

In a remote part of Colombia, surrounded by muddy waters and dense, humid jungle, there...

With a PG 450 grinder, S 26 vacuum and a pre-stocked bucket containing all the...

Smart Solutions that Make a Difference

Husqvarna is one of the world's leading developers and manufacturers of diamond tools for cutting...

Masonry contractors know how much dust flies when dry cutting bricks and blocks. That is...