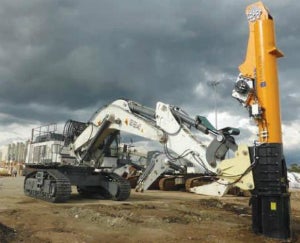 The Fractum breaker is manufactured by Danish company Fractum, and is said to be the biggest and most powerful hammer in the world, able to deliver up to 300kJ of energy in a single stroke, which, according to Fractum, is at least 15 times more than any conventional hydraulic hammer can achieve.

A number of the units are working around the world, and they have reportedly proven particularly popular in Europe and China.

The Fractum breaker is simplicity itself. It essentially consists of a hammer head, which is lifted to the top of a tube and then released to freefall onto the material to be broken. The target material is unable to absorb the kinetic energy imparted by the blow and therefore disintegrates.

In the mining environment, the Fractum has proven capable of breaking rocks of up to 200t in mass, and eliminates the need for any secondary blasting. An interesting phenomenon is that the harder the rock, the more efficient the Fractum tends to be, as harder material is less able to deform and absorb energy.

The Fractum breaker is mounted on a hydraulic excavator. The vibration from the breaking process is contained in the hammer head and is not transferred back to the excavator as for conventional chisel-operated systems. As a result, wear and tear, on both the breaker and the excavator, is minimal. In addition, the Fractum breaker’s noise levels are significantly lower than those of conventional chisel systems.

The machine being used at the opencast mine is owned and operated by Joburg-based Bel Quip Centre (BQC), a company founded by Mario da Silva and his son, Zack, as an aftermarket workshop for the refurbishment of older earthmoving machines.

The venture proved successful, with much of its client base being in the mining sector. The company’s workshop is currently located in Sebenza, Edenvale, but a new, modern facility is in the process of being opened in Midrand.

An innovative Fractum rock breaker has now been in operation at a large South African opencast platinum mine for roughly two years, and has proved such a success, in a secondary breaking role, that it will soon be joined by two more Fractum machines.

While BQC remains active in earthmoving repairs and refurbishment, its involvement with Fractum has become steadily more important.

Explaining the transition, Mario, a qualified diesel mechanic, says that BQC’s first entry into the Fractum business dates back about three years. "At that stage it had become evident to us, from the work that we were doing in the mining field on machine refurbishment and repairs, that there was an opportunity in the secondary blasting field," he says. 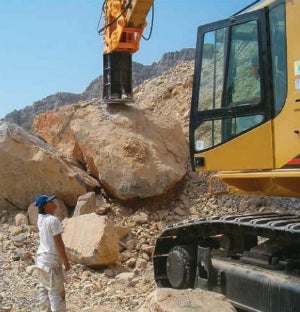 "We had become aware that there was a single Fractum unit that had been imported into the country, for use in the steel industry breaking iron, slag and steel, but that the machine was basically standing idle. In fact, it had only been used for a few hours. We were convinced that it could very effectively break up the rocks left by primary blasting, in the process eliminating the time-consuming and expensive need for secondary blasting.

"To cut a long story short, we managed to arrange a demo for the managers at the platinum mine, where we’re now working. We hired the machine from the company owning it, with a promise that we would buy it if the mine gave us a contract. After seeing the machine in action, the mine literally decided on the spot that it would like it to be permanently deployed in the pit, and so our gamble paid off. The rest is history, as they say.

"We were recently given a two-year contract, renewable over ten years, and on the strength of this we’re now importing a further two machines. Like the current one, these are both Model 200s, which offer 200kJ of energy. We’ve also invested in a couple of Bell ADTs and a Volvo 36-t excavator, as we’re now not only breaking the rock but also loading it and hauling it to the crusher."

While BQC is not an official distributor for Fractum, it does have a loose alliance with the Danish company. Mario says "We have an exceptionally good relationship with them and, on an informal basis, act almost as their representative in South Africa."

Regarding his own plans, he says he would like to offer the Fractum to other potential clients. "Apart from mines, we also see opportunities in the construction and civil engineering field for short-term hires," he says.

"The problem is that we are fully committed to our platinum mining client and will need to bring in one or more additional machines to meet the demand that we can see. The Fractum-hydraulic excavator combo represents a substantial investment, a ball park figure would be R10 million, so naturally, as a small family business, we are moving cautiously.

"Nevertheless, Fractum is already the heart of our business and our involvement with the machines will definitely grow. The basic message we want to get across is that BQC is able to offer a total rock breaking solution to the local market."

As a global industry leader, we work to deliver hammers of consistently high quality and...

We have just commissioned no 2. Fractum breaker model 200 at the Sumitomo steel plant...

The wear and tear of traditional mining and quarrying equipment tends to be high; particularly...