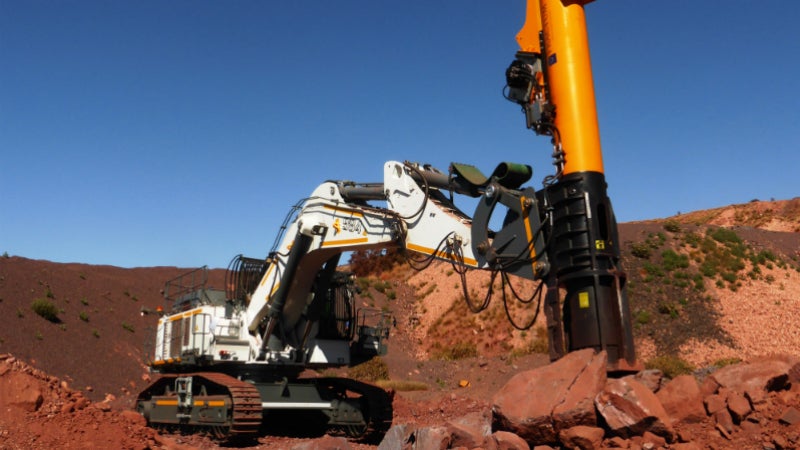 The Fractum breaker is the largest hammer in the world. Its energy impact, at up to 400,000J per stroke, is 15 times higher than the energy released by the biggest hydraulic hammer on the market.

Fractum breakers are compatible with all popular earthmoving equipment. The hammer head is lifted to the top of the tube where it is released and freefalls to the ground. This is, in essence, a controlled drop ball with the advantages of precision, safety and an unprecedented capacity. Only the traditional lifting cable is attached to a mechanical coupler, which makes the system failsafe, since there are no electric cables or hydraulic hoses involved.

The hammer head comprises ballast blocks and the tip. The tip is a wear part and can be changed on site. The lifetime of the tip is considerably longer than a chisel’s as the Fractum breaker does not penetrate the material in the same way as a chisel on a rock breaker.

When breaking rock and concrete, the breakage happens by introducing so much energy in a small area that the material is unable to absorb this energy and therefore disintegrates. This is also the reason why it operates with increasing efficacy as the hardness of the rock increases, since hard rock has less ability to absorb this kind of energy.

Because the freefalling hammer head is completely independent of the chassis, very few vibrations are transmitted from the hammer back to the carrier. The load on the excavator is typically 50% lower than when used with comparable hydraulic hammers, resulting in the extended life of excavators, with the related reduction in costs and increase in productivity.

By integrating controlled drop ball technology with a durable hammer head, Fractum’s attachments provide precision impact every time they are used. Reliability, safety and performance are enhanced and costs are effectively reduced, while the rugged, problem-free breakers can be safely used in close proximity to other on-site equipment and personnel.

The impact is contained inside the tube and the amount of flying material, such as one finds with chisel-operated systems, is dramatically reduced. Since very large rocks are broken more effectively into smaller pieces, secondary blasting is obviated and there is less need for secondary crushing of the material.

By using the Fractum breaker in quarries and open pit mines, one eliminates the need for secondary blasting, by performing the secondary breakage at the location of the boulders. It can also work directly on the blast together with the excavator, to immediately perform oversize reductions; one eradicates the need to spend money on moving the boulders.

Using Fractum technology, it is possible to break the slag skull when it is still red-hot. This allows you to decrease the cooling time by 500%, so the material can be transported away from the slag pit within 24 hours.

Fractum breakers are able to perform the deskulling process with much higher success rates, without damaging the pot. By adjusting the impact power of the breaker, it is possible to apply variable energy for different breaking tasks.

Due to the Fractum breaker’s safety in operation, it is possible to have other machines such as magnets and trucks co-working alongside the Fractum machine. This significantly increases the speed of secondary breakage tasks and improves the overall productivity.

Capacities of between 200t and 400t per hour are typically achieved and higher numbers have been attained by some of Fractum’s progressive customers. The Fractum breaker is the ideal solution for companies wanting to reduce the equipment required on site for demolition and rock breaking.