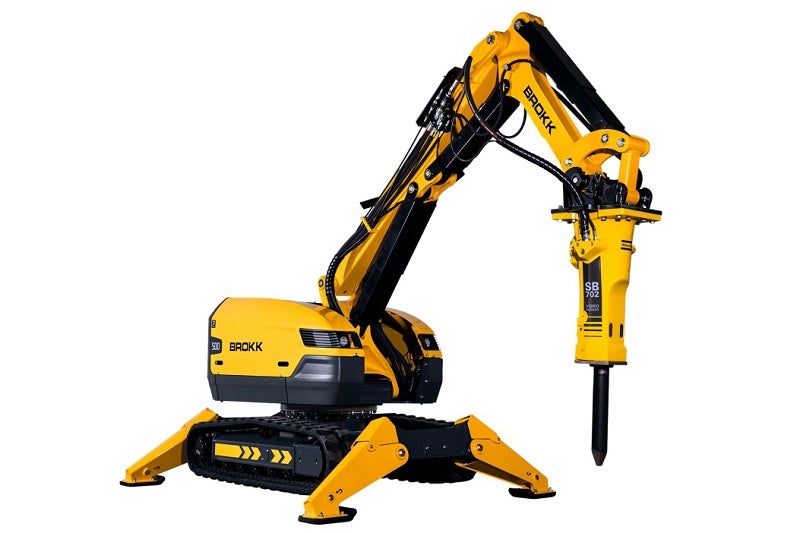 Brokk, the world´s leading manufacturer of remote-controlled demolition robots, introduces the new Brokk 500, which features 40% more demolition power, the Brokk SmartPower™ electrical system, a more powerful breaker, extended reach and industry-leading serviceability. And it adds a portion of good looks to the worksite as well.

The new Brokk 500 adds 40% more breaking power than its predecessor. The machine delivers 1,500 joules punch with each blow of the 700kg Atlas Copco SB702 hydraulic breaker. On top of that it adds further length to Brokk’s signature three-part arm system, now reaching 7.4m vertically and 7m horizontally, making it ideal for work where the extra reach is of importance.

Still the Brokk 500 retains most of the compact proportions of its predecessor, the Brokk 400. With its 5,200kg, it is only marginally heavier and the width of the machine is the same. And it is ‘backwards compatible’, so all the tools and attachments used for the Brokk 400 can also be used on the new Brokk 500.

The Brokk SmartPower™ system is uniquely designed for the extremely tough operating environment of a demolition robot. Its components are either designed by or modified by Brokk to withstand the demolition forces over time. In addition it helps the operator to get the machine started on poor power supply, while at the same time it protects the Brokk machine from any harmful faulty power.

The Brokk 500 incorporates the industry-leading reliability and serviceability that Brokk has become known for over the years. New on this machine is that operators now can complete all daily and weekly maintenance without even having to lift the covers of the machine. And replacing any damaged hydraulic hoses is now simpler than ever.

Add other items, such as the strengthened new Brokk machine design, the reinforced casted details, the new headlight protections, and you have a machine truly hardened for the tough Brokk environment.

"The Brokk 500 is a remarkable demonstration of how far we have come in getting the most demolition power possible out of a Brokk machine without adding to its size, largely thanks to our new Brokk SmartPower system. It is also yet another proof point of the resources we invest in product development, the Brokk 500 is the fourth new machine we release in just over a year’s time," says Brokk Group CEO Martin Krupicka.

Brokk has released a brochure for the series 800 mining equipment. Download the free brochure or visit the company website for more product information.

In line with their strategy to create value by extending the lives of group mines, Sibanye embarked on a project to mine the many support...