Autonomous solutions – a boon for mine sites

Autonomous solutions allow mining companies to help enhance safety and overall productivity at mine sites. The technology automates the haulage operations and reduces the risk of injuries at mine sites by minimising the number of people required around mining equipment.

AHS helps avoid breaks or shift changes that are associated with the use of manned machines for mining operations, allowing greater equipment availability. It also enables miners to reduce fuel consumption and emissions.

Listed below are the leading AHS manufacturers serving the mining industry.

Caterpillar, a global construction machinery and equipment company based in the US, offers Cat® MineStar™ Command for hauling to enable miners to move more material with fewer people on site. The AHS solution facilitates improved efficiency and near-continuous operation. The proven system can be used for mines of all sizes, locations, and complexities. 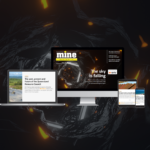 Analysis
The sky is falling: the new issue of MINE Australia is out now 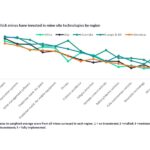 Fortescue Metals Group (FMG) and BHP are two of the biggest customers of Caterpillar’s autonomous haulage solutions. FMG’s Solomon iron ore mine is Caterpillar’s flagship operation for its autonomous solutions. The mine site is being developed into a fully autonomous operation. FMG also completed the conversion of the mining truck fleet at the Chichester Hub iron ore operation in Pilbara, Western Australia, to AHS, with the help of Caterpillar and Thiess in October 2020.

BHP implemented the autonomous solution at its Jimblebar iron ore operation in Pilbara, completely transitioning the operation to autonomous trucks. To be served by Cat 797F CMD trucks, Newmont’s Boddington gold mine in Australia will become the world’s first open-pit gold mine with an autonomous haul truck fleet.

Japanese multi-national company Komatsu offers its FrontRunner AHS for effective mine management. The technology combines Komatsu’s electric drive haul trucks with Modular Mining’s Dispatch fleet management system and allows loaders, graders, and dozers to interact with each other for optimised mine operations. Equipped with global navigation satellite positioning systems, integrated controllers, and advanced sensors, the AHS-enabled haul trucks can be controlled from a remotely-operated control centre.

Komatsu’s AHS was implemented for the first time at Codelco’s Gabriela Mistral (Gaby) copper mine in Chile in 2008. Mining companies implementing FrontRunner technology have hauled more than 3.5 billion tonnes of material to date.

Approximately 150 Komatsu autonomous trucks are in use at nine mine sites. The solution became the first AHS in the industry to qualify to run on private long-term evolution (LTE) mobile broadband technology in commercial operations in 2019.

The company agreed to deploy 37 930E ultra-class electrical dump trucks at Vale’s Carajás iron mine in Brazil in 2019. Rio Tinto ordered 29 AHS retrofit kits for installation on 830E standard trucks currently operating at its Brockman 4 mine in the Pilbara region.

Hitachi successfully completed the trials of its AHS solution at the Meandu coal mine in Australia in 2017. Image courtesy of Wencomine.

Hitachi started the trials of its AHS solution at Australian power generation company Stanwell’s Meandu coal mine in eastern Australia in 2013. It unveiled plans to develop an AHS in collaboration with its subsidiary Wenco International Mining Systems in April 2015.

The trials at Meandu were successfully completed in 2017. The company reached an agreement with Whitehaven Coal to jointly design and deploy an AHS at the Maules Creek coal operation in north-west New South Wales, Australia, in July 2018. The initial scope covered the supply and commissioning of AHS for the Hitachi EH5000AC3 truck fleet at the mine. Hitachi and Rajant successfully deployed AHS at a coal mine in Australia in May 2020.

Hitachi’s AHS solution leverages its Smart Mining Truck system and the fleet management system provided by Wenco. The company incorporated a permission control technique from the railway industry into its AHS.

Scania and Rio Tinto are testing a new-generation autonomous truck at the latter’s Dampier Salt operations in Western Australia. The first phase of the testing began in August 2018 using a Scania XT 8×4 autonomous tipper truck that worked separately from active operations.

Scania announced an automated haulage concept without a driver’s cab for mining operations in September 2019. Known as Scania AXL, the fully-autonomous cab-less concept truck was demonstrated for the first time in October 2019.

Developed by a team of Scania’s experts, the concept vehicle is steered and controlled by an intelligent control system. Its combustion engine drives power from renewable biofuel.

Volvo reached an agreement to provide a commercial autonomous solution to transport limestone from Brønnøy Kalk’s open-pit mine in Velfjord, Norway, to a nearby port in November 2018. Testing of the Volvo FH autonomous trucks was performed in 2018. The agreement for the commercial use of the autonomous trucks marked a first for Volvo Trucks.

Volvo Group is also undertaking a research project to develop a fully-autonomous truck solution for customers in the mining industry. The self-driving FMX truck is a project being implemented in partnership with Saab. It was earlier tested in operations in the Kristineberg mine in Sweden at more than 1,300m underground.

The implementation of AutoMine for Trucks requires the creation of necessary infrastructure at mines. The company already has more than 40 autonomous loader systems in Australia.