In Association with Monico

To begin, what is remote condition monitoring for mobile assets? It should be an easy answer but it’s surprising how many different models or versions are out there. Over the years, Monico has been engaged with a number of different companies that allude to capturing machine data and doing remote monitoring, only to find out that they were manually downloading information from the machines once a fortnight, reviewing and storing the data and at best running a couple of reports.  For them, that was remote monitoring and yes, they were having wins on slow burning issues such as cooling system issues and such, however overlooked predicting things such as an injector or turbo failure.

Remote Condition Monitoring is a solution that incorporates live streaming data with cloud analytics to provide predictive and preventative alerts and notifications about the status of industrial assets and their engines. Combining Monico’s engine Subject Matter Experts with its customer’s operational & maintenance expertise, learn how you can increase visibility, improve reliability of machines and improve operation, performance and utilisation. 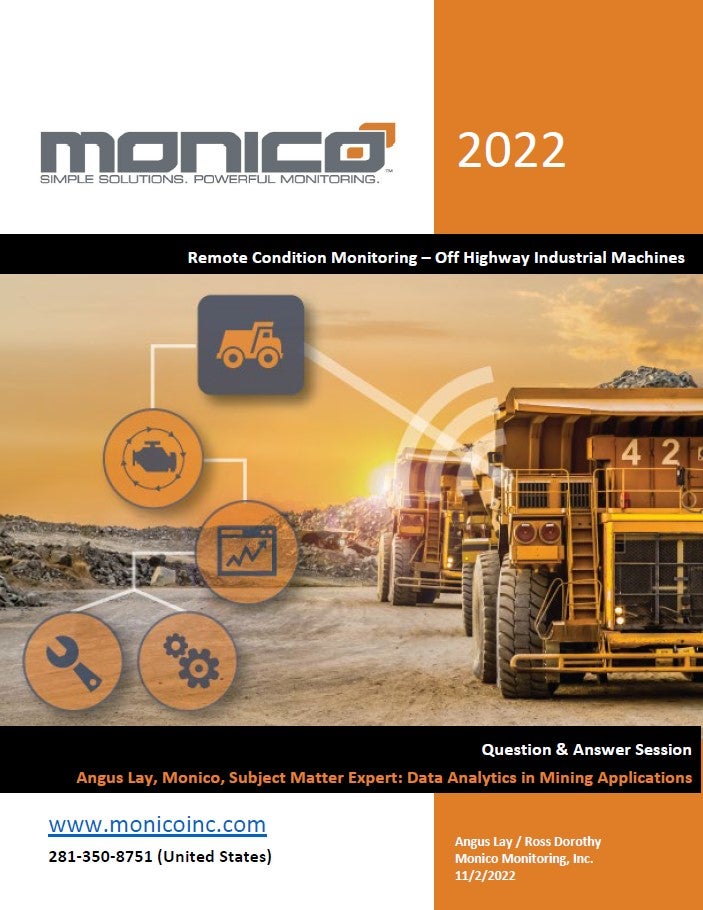 Other solutions out in the market, are transmitting a daily average for temperatures and pressures etc. via satellite, and while this is a huge leap from the fortnightly downloads, the daily averages have a nasty habit of removing the peaks and valleys and can mask developing issues until it’s too late. Other platforms are using hourly averages of the same data. Again, this is a huge improvement over daily averages, but the averaging of the data still suffers from the flattening out the highs and lows and again can mask any developing issues.

Being in control of maintenance

While all of these systems can provide valuable information and can identify certain failure modes, they have limitations to what failure modes can be detected and lack the sensitivity to identify the issue at the earliest possible onset, resulting in the failure being progressed to the point where damage is already being done. Potentially the failures are well advanced along the PF curve before they become apparent in the data. As the failure mode has progressed to a point where damage is now being caused, the window of opportunity to plan repairs has also reduced and the machine will likely need to be removed from production asap to complete repairs, resulting in unplanned downtime.

While this is still a win in comparison to not knowing there was an issue until the machine pulls itself up and becomes a breakdown event, it’s still reactive maintenance. While it is a move in the right direction, it’s not robust enough for predictive maintenance where we understand our assets and are informed and in control of maintenance.

To be truly predictive and capture the key indicators to predict failure modes at their early onset, data sampling and transmission rates are key. The wrong sampling rates, the issue can and will go undetected until it’s too late and if the transmission rates are too long between uploads, then the same thing can happen. You will have the hindsight of seeing the issue progress but if the data is only downloaded once a day, it’s very likely the machine had already began exhibiting operational and efficiency problems.

With correctly matched sampling and transmission rates, the issue can be identified sometimes months in advance and well before any permanent damage is done. This allows the time to investigate and validate the issue, organize the parts and the people, and plan the job to be completed during a planned shutdown or scheduled service.

With an industrial data acquisition device such as Monico’s mCore®SDR, you have direct access to your data and through a simple web browser/mCore user interface, changes, or updates to sampling rates are as simple as a couple of clicks of a mouse button.  Additionally, you can also fine tune exception reporting and ensure the data being transmitted is being captured and transmitted at the correct frequency to identify the failure modes at the earliest possible onset. Unlike other platforms on the market where you simply don’t have access to be able to make these adjustments, without engaging with the supplier, and in some cases these changes require approval and potentially new firmware to be written and applied. Monico’s mCore doesn’t stop there, being OEM agnostic, it can be fitted to any make and model of machine that has telemetry data available. As far as data transmission goes, if you don’t have the site infrastructure onsite or the current network doesn’t have the bandwidth, no problem if you have good cellular coverage onsite, mCore can be configured to use the cellular network to off-board the telemetry data.  Additionally, when doing analytics on data, having losses or gaps in data can cause problems. Monico’s mCore buffers data when transmission is weak or non-existent, once connection is re-established the mCore device will ‘backfill’ the data in the database with the appropriate timestamps.

Wondering where to process all the data and perform analytics; possibly you don’t have an analysis platform? No problem, Monico can also provide a hosted solution called Monico™Live, which has all the intelligence already built into the platform, to ensure your equipment is being monitored 24/7, and has the added benefit of being backed up by industry SME’s that have written the algorithms, with experience relevant to your equipment.

For more information on this topic, please download the whitepaper, below.

Remote Condition Monitoring is a solution that incorporates live streaming data with cloud analytics to provide predictive and preventative alerts and notifications about the status of industrial assets and their engines. Combining Monico’s engine Subject Matter Experts with its customer’s operational & maintenance expertise, learn how you can increase visibility, improve reliability of machines and improve operation, performance and utilisation.