In Association with MTi Group

Explosives, used in most mining operations for blasting rock, are the principle means by which rock material is fragmented and extracted in both open-cast and underground mining. In the last year, the cost of explosives manufactured with ammonium nitrate has been soaring. Global factors such as supply chain challenges and increased demand, spurred on by governments leaning into a resource – and construction-led recovery, have played a part in the astronomical rise. However, other factors have also been at play.

Commodity price pressures are ever-present, and mining operators are seeking to reduce their costs blasting costs. At the same time, it is critical to reach the same velocity of detonation (VOD). This whitepaper presents the results of a study of BLASTBAGS, demonstrating that a customer could reduce bulk explosive use by 5,300 tonnes, saving USD 1.6m per year. The use of BLASTBAGs can generate significant cost savings without compromising the effectiveness of the blast. 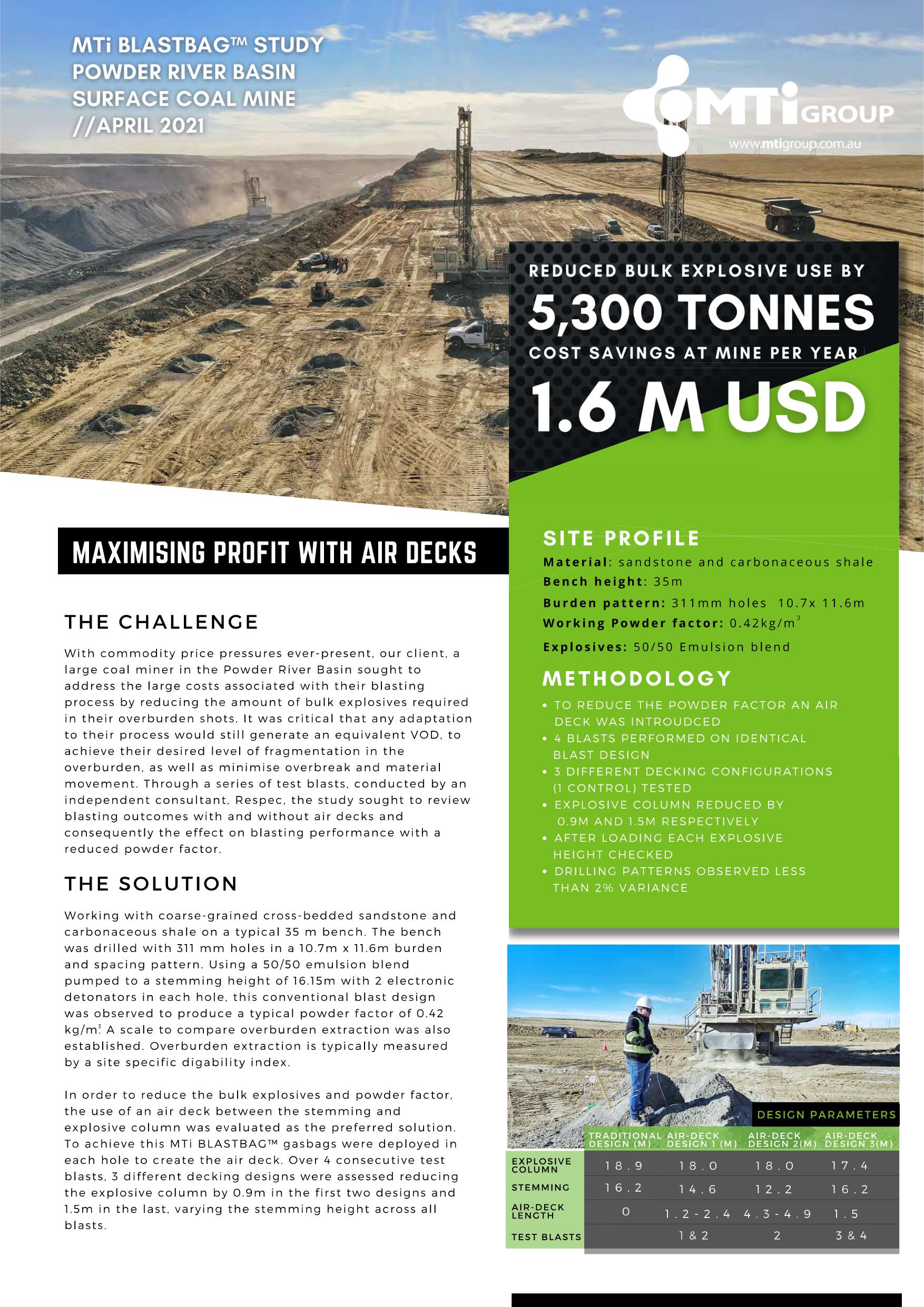 According to David Kurtz, Director, Mining & Construction at GlobalData, “Ammonium nitrate (AN) prices have been on the rise due to climbing costs of ammonia and natural gas, which is used in its production”. In some instances, the cost of ammonium nitrate has seen as much as an eye-watering 200% increase.

At the centre of all this is the conflict in Ukraine. Russia accounts for 43%-66% of all global AN production, making 3,652,445 tonnes annually (as of December 2021). In February this year, a ban on exporting AN was announced by the Russian government, followed soon after by embargos on Russian commodities, notably gas. The constrained supply of AN for explosives production and the rise in fuel cost, has created the perfect storm and sent AN price skyrocketing, with some businesses simply unable to secure any AN stock, period.

In Europe, the impact has been swift and severe, so much so that energy-intensive fertiliser producers (a good barometer of AN-dependent manufacturing) are faced with scaling back production or shutdowns (because of lack of availability) or simply, passing on the costs as prices continue to rise.

In anticipation, mining operations are tightening their proverbial belts across all activities to minimise the impact and protect their cost base. Stockpiling explosives and other vital chemicals has become rife, and in more extreme examples, some miners are rumoured to be considering mining their own input material to reduce their exposure.

For many operations, these extreme reactions are out of reach. The idea of becoming leaner too in a hyper-competitive market, is also increasingly challenging. Fortunately, there are a few ways around this impending issue, namely, to optimise explosive use; and address the cost of explosives directly.

In many mines, explosives companies play a big role in the overall blast design and implementation. Typically, the mainstream designs employed are the easiest and quickest to deploy, often taking a very conservative approach defined by over blasting material with the most energetic explosives. An abundance of excess.

Given the current landscape, careful consideration at key stages could markedly improve commercial outcomes. For example, investigating and pairing explosives to match ground type, avoiding excessive energy, is one such avenue. Another is deploying one (or more) of the plethora of technical blast configurations that have evolved to reduce explosive consumption (without negatively impacting fragmentation) and address specific site requirements.

One of the best-documented solutions that describes the latter, uses a modified blasting technique to address the cost issue by reducing the amount of explosives needed in a drilled hole. An air deck, as it is known, uses specialised tools such as the BLASTBAG gasbag to create a void of air in the blast column (an air deck). Resulting in fewer explosives per hole, and fewer explosives overall while still maintaining adequate blast energy.

“In one project – pre-Covid – we implemented our BLASTBAG solution at a Powder River basin mine for this very function, to lower the operator’s explosives costs,” says Johan Hawinkel, Global Business Manager at MTi Group. “Instead of completely filling the drilled hole with stemming and explosives, we reduced the explosives column height by a fraction. By introducing air decks into their blast design, the miner was able to reduce the amount of explosives they consumed- saving the mine upwards of US $1.6 million per year,” he says.

“It was imperative to the client that productivity was not affected. In preliminary trials, we carefully observed the time it took to create an air deck and it was overwhelmingly concluded that the additional time spent was negligible,” Hawinkel continues. Offering operators the benefit of easily and quickly adopting the solution into their programs without disruptions to their current practices. A huge benefit to the market.

“Depending on your desired application, air decks can also be used to improve fragmentation. By positioning the BLASTBAG gasbag at a calculated point in the blast column and better distributing the explosive energy, greater fragmentation of rock can be achieved with the same amount of better-placed explosives. Better fragmentation means less processing, meaning lower costs.” explains Hawinkel.

For sites operating in wet and difficult terrain, another immediate cost control solution is the ability to manage the type of explosives being used. MTi Group’s engineered hole liner, BLASTSHIELD, allows miners to use lower density ANFO instead of high-priced emulsions. Higher-priced emulsions are typically used for their water-resistant properties, though these are materially more expensive than ANFO. BLASTSHIELD mitigates the need for water resistance explosives by providing a protective barrier offering operators the freedom to use lower-cost explosives (ANFO). At the same time, BLASTSHIELD addresses traditional lining challenges (breakage, slow, heavy) through an engineered multi-composite material made for easy deployment.

Current forecasts project a turbulent outlook for gas and AN supply, certainly in the short to medium term. Together with post-Covid supply chain aftershocks, it is reasonable to expect inflated costs to loom in one form or another with key inputs such as explosives, making the ability to control cost shocks and manage operations with simple optimisation solutions not only imperative but also invaluable.

Commodity price pressures are ever-present, and mining operators are seeking to reduce their costs blasting costs. At the same time, it is critical to reach the same velocity of detonation (VOD). This whitepaper presents the results of a study of BLASTBAGS, demonstrating that a customer could reduce bulk explosive use by 5,300 tonnes, saving USD 1.6m per year. The use of BLASTBAGs can generate significant cost savings without compromising the effectiveness of the blast.