According to the company, the Automine Concept vehicle is equipped with new sensing capabilities and artificial intelligence (AI) for real-time reactions to their environment.

The new design was unveiled at the company’s Mining Virtual Event.

Sandvik noted that its AutoMine Concept enables vehicles to adapt and plan their own routes to find the suitable paths in “constantly changing environments” by using obstacle detection, collision avoidance as well as 3D online mapping. 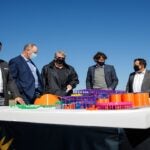 It features a completely new cabinless design and is also equipped with built-in components for productivity and reliability.

Sandvik automation vice-president Riku Pulli said: “The AutoMine Concept is unique, because it has been designed ground-up for autonomous use.

“This technology raises ease-of-use, effectiveness of asset utilization and adaptability to a new level, resulting in higher productivity.

“These technologies will truly change the face and pace of autonomous mining.”

Sandvik claims the AutoMine Concept as a “game-changing” platform, as it can be applied to any vehicle.