The European Commission has come up with a new legislative proposal, the European Critical Raw Material Act, to help boost supplies of minerals such as lithium and rare earths.

The proposal was announced by European Commission President Ursula von der Leyen as part of the annual State of the Union address.

Leyen said the European Union (EU) intends to reduce dependency for critical minerals on countries including China, where 90% of rare earths and 60% of lithium are processed.

She stated: “The not-so-good news is – one country dominates the market. 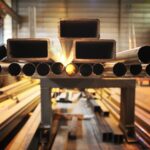 “So we have to avoid falling into the same dependency as with oil and gas.”

Through the new legislation, the EU intends to identify potential projects along the supply chain, from extraction to refining and from processing to recycling, as well as build up reserves.

The EU expects its rare earths demand to grow fivefold by the end of this decade.

To ensure a sufficient supply of lithium and rare earths to help countries transition to a green economy, Leyen is considering ratification of trade agreements with Chile, Mexico and New Zealand as well as looking to advance talks with partner countries, including India and Australia.

“However, European raw materials that aren’t deemed ‘scarce’ or ‘rare’ shouldn’t be left behind. Policymakers should introduce measures for all raw materials industries to help increase their supply security, obtain greater investments and scale up recycling capacity to recover valuable secondary raw materials.”