The concern index is based on respondents who answered that they are very concerned about the spread of COVID-19. 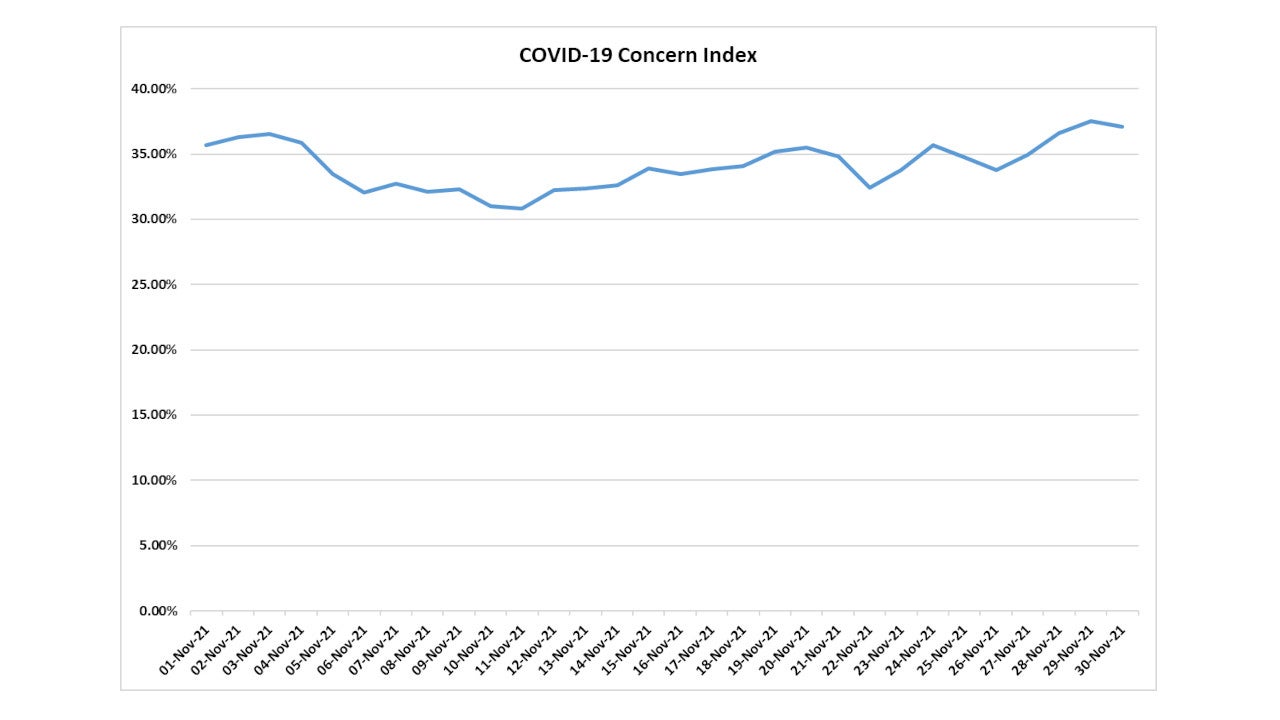 COVID-19 concern falls in the first two weeks of November

The health concern over COVID-19 in November averaged at 34% continuing its downward trend for three months in a row from 45.6% in August, 41% in September and 35% in October. The concern during the first week of November averaged at 34.6% compared to 35.1% in the last week of October. All regions reported either decreasing or stable trends in the number of new COVID-19 cases and deaths between 01 November and 07 November except the European region, according to the World Health Organization (WHO).

The concern in the second week of November between 08 November and 14 November declined further to 33%. The number of new cases, however, continued to increase in Europe, the Americas, and Western Pacific regions although the remaining regions reported either declining or stable trends.

The health concern rose slightly in the third week to 34% as the number of new cases continued to increase reaching 3.6 million between 15 November and 21 November. The highest increase was reported by the European region at 11% from the previous week. Other regions such as South-East Asia and Eastern Mediterranean regions continued to report a decline in the number of new weekly cases at 11% and 9%, respectively.

The COVID-19 concern increased further to 35% in the last week reaching levels witnessed in October. The number of new cases and deaths increased, with the new cases reaching 3.8 million between 22 November and 28 November. The highest increase was reported in the African region at 93% mainly due to bulk reporting of antigen test results by South Africa, followed by Western Pacific (24%) and European regions (7%).

The increase in cases in the last week coincided with the discovery of a new COVID-19 variant (B.1.1.529). The WHO named the new variant as Omicron and declared it as a variant of concern (VOC) on 26 November. First identified in South Africa on 24 November, Omicron has several mutations that may increase transmissibility and lead to a surge in COVID-19 cases, according to the WHO. South Africa reported a surge in COVID-19 cases in several regions within the country, which coincided with the detection of the variant, the WHO added.

The analysis is based on a total of 916 responses received from the readers of Verdict network sites between 01 and 30 November 2021.