Could graphene batteries change the face of graphite mining?
Menu

The lithium-ion (Li-ion) market it set to boom, as governments, companies and individuals turn to batteries for energy storage for intermittent renewables and electric vehicles. By 2040, it is predicted that there will be 530 million electric vehicles around the world. Already companies are scaling up their production of battery tech, with companies like Tesla and its Gigafactory at the forefront. According to Bloomberg New Energy Finance, by 2021, 270GWh worth of electric vehicle Li-ion batteries will be produced, up from just 90GWh today.

Much has been made of battery minerals, in particular lithium and cobalt. But graphite, one of three naturally occurring carbons on Earth, is often overlooked.

There is as much as 40 times the amount of graphite in a lithium-ion battery as lithium. This is one of the key drivers for the increasing demand for the mineral, which is set to soar by as much as 200% by 2020. This demand prompted a 25% rise in the price of graphite between December 2016 and December 2017.

Another driver is graphene, a recently developed ‘super-mineral’ that could dramatically improve battery technologies. Earlier this year, Samsung announced plans to include graphene ion in its phone batteries, helping them to charge faster and holder charge for longer.

As graphene shines a light on graphite, what will it mean for demand?

Graphene: the new kid on the block

Scientists at the University of Manchester began developing graphene in 2004. It is a 2D atomic layer of graphite, generally created through mechanical exfoliation. In 2010, scientists from the university won a Nobel Prize for the discovery.

“Graphene is a revolutionary product that can make internet connections faster, filter salt water and make phone screens unbreakable, and is clearly a prime example of the innovative ability of British companies to change the landscape of manufacturing on a global scale,” said Graham Stuart, UK Minister for Investment at the Department for International Trade.

To date, graphene is the strongest mineral ever discovered, with 40 times the strength of diamond. It is more effective as a conductor of heat and electricity than graphite.

Over the past eight years, an increasing number of potential uses for graphene have been explored, including its use in supercapacitors and as a membrane for filtration.

Graphene is capable of transferring electricity 140 times faster than lithium, while being 100 times lighter than aluminium. This means it could increase the power density of a standard Li-ion battery by 45%. 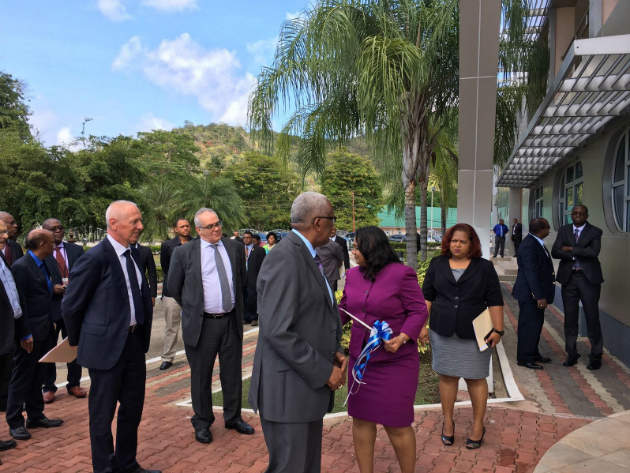 On the trail of tantalum: tracking a conflict mineral

The commercialisation of graphene has thus far been held back by a lack of standardisation. In July, the National Physical Laboratory and the National Graphene Institute at the University of Manchester launched the world’s first graphene characterisation service.

“This service will provide the missing link between academia and industry and will revolutionise how graphene is commercialised in years to come,” Stuart said at the service’s launch in London.

This was welcomed by both researchers and those in the graphene industry. “There are no current standards of what exactly graphene is, which needs to be addressed if we are to see significant buy-in from end users,” says Buckley.

A clear framework should ease sales of the commodity by ensuring purchase agreements are fair for both buyers and sellers.

With the development of Li-ion batteries, demand for graphite has been increasing. Both the US and the European Union have listed it as a strategic mineral, solidifying its importance.

Graphite is most commonly used in the manufacture of steel due to its ability to remain rigid in temperatures up to 3,600°C, but it has been used in hundreds of industries for thousands of years. It is highly conductive of both heat and electricity.

Graphite is the soft form of pure carbon, and is generally found in either flakes or in mass in the natural environment. It can be synthetically constructed, but due to the high cost of this process, it is more commonly mined.

The commodity is mined around the world, including in Brazil, India, and Madagascar. China is the biggest producer of graphite, but recent reductions due to the country’s efforts to reduce pollution and protect the environment could change this.

Currently, the largest use of graphite is in the creation of steel; in 2015 only 5% of graphite was used in batteries. This, however, this seems set to change as countries, in particular China, move towards less carbon-intensive economies.

Efforts to switch to renewable technologies to reduce pollution and slow climate change have been hampered by the intermittency of technologies. It is often bemoaned that solar is great when the sun shines and wind turbines are brilliant when the wind blows, but neither can produce baseload power.

One effort to bypass this complaint is to develop storage technologies to balance production and demand. Currently, this is predominantly focused on Li-ion battery cells in a host of sizes. This ranges from vast batteries such as Tesla’s giant Powerpack in Australia, to those used in electric vehicles, but they all have one thing in common: they require large amounts of graphite.

Demand has already increased exponentially, and led to predictions that the market for graphite could increase to 250,000 tonnes by 2020. As the world turns to batteries, mining operations will have to expand to meet demand; currently the biggest graphite mine in North America produces just 25,000 tonnes annually.

While synthetic graphite can be altered for use in battery technologies, the large amounts of coal required to produce it dramatically reduces its green credentials. This has led analysts to predict a rise in interest in mining graphite, instead of synthesising the commodity.

Graphite and graphene in the spotlight

Demand for graphite is already set to grow in the coming years, and supply constraints could be further exacerbated should graphene truly take off as a battery material. Many hold out big hopes for the man-made mineral, and its influence on battery technologies. “We expect a strong growth in graphene in the next 10 years,” says Buckley.

Its increased development and commercialisation will undoubtedly affect the focus on graphite. Technology is quickly improving the processing of graphite, increasing the attractiveness of natural graphite.

“Advances in thermal technology and acid-leaching techniques that enable the production of higher purity graphite powders are likely to lead to development of new applications for graphite in high-technology fields,” said the US Geological Survey. “Such innovative refining techniques have enabled the use of improved graphite in carbon-graphite composites, electronics, foils, friction materials, and special lubricant applications. Flexible graphite product lines, such as graphoil (a thin graphite cloth), are likely to be the fastest growing market. Large-scale fuel-cell applications are being developed that could consume as much graphite as all other uses combined.”

As the world continues to switch to a cleaner energy system, it seems likely that graphite and the ‘super mineral’ graphene will start proving their potential.