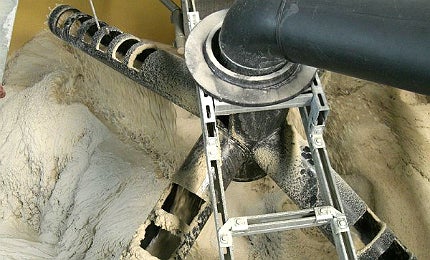 For more than a century, industrial silica sand has been mined in the Upper Midwest region of the US for use in various applications, ranging from glass-making and abrasives, to golf course traps and aluminium packaging.

Business was steady, but in the past decade the rapid expansion of shale oil and gas has sent demand soaring, spurring interest for new silica sand permits in the region.

One of the industry’s biggest players, US Silica, said its sand sales related to hydraulic fracturing, an oil and gas extraction method which can require around 10,000 tonnes of industrial silica sand per well, nearly doubled to $70m from 2009 to 2010.

The so-called ‘sand rush’ has since slowed due a drop in gas prices, but analysts expect that by 2016, prices will climb and rig counts, which as of May 2012 had fallen by 30% on an annual basis, will return to their usual levels.

This news has made miners, particularly those in south-eastern Minnesota – where there are at least eight frac sand mines and several more proposed – determined to move forward with their projects.

But the anticipated rise in silica sand mining activities has triggered concerns among long-term residents in the state, and a call for a one year pause on new projects until important questions relating to environmental impacts are answered.

"The so called "sand rush", has since slowed due a drop in gas prices, but analysts expect that by 2016, prices will climb."

Residents and environmental activists are concerned about the potential rapid growth of silica sand mining in south-eastern Minnesota. This concern has grown out of a number of factors, including possible groundwater pollution.

The region has a unique topology in that the Mississippi River and several trout streams cut across it. Excessive instream sand mining is said to cause degradation of rivers and bank erosion.

Save the Bluffs lobbyist John Kaul says that citizens in neighbouring Wisconsin – where around 100 mines have already been permitted – have seen wells run dry.

"These operations use millions of gallons of water a day and so you could say that in the instance where water wells have gone dry, is it the silica sand mining or is it the drought, or is it both? These are concerns that are being carried forward into Minnesota."

South-eastern Minnesota is also known for its scenic beauty; its wooded bluffs have attracted a large tourism industry, and local people are worried that with the number of jobs created from sand mining, countless jobs will be destroyed as this activity takes over the land.

The impact on transportation is also an issue; some residents are objecting to the noise and truck traffic caused by the mining. Furthermore, the Minnesota Pollution Control Agency says it’s been getting more calls from people who are concerned about possible health risks associated with silica, a potential carcinogen.

"In the past decade the rapid expansion of shale oil and gas has sent demand souring, spurring interest for new silica sand permits."

Owing to these concerns, some officials in Minnesota are attempting to scale back sand mining in the state while they rethink environmental costs, despite expectations that oil and gas producers in Texas and Pennsylvania will pump huge sums of money into these projects.

So far, Goodhue, Wabasha and Fillmore counties have placed temporary bans on new mines, according to a recent report by the Minnesota Public Radio, and the cities of Red Wing, Winona, Lake City, Hay Creek and Florence have also pushed the pause button on these projects.

But the three-month moratorium placed on new sand mines in Winona County expired in March, and production is also set to restart in Wabasha and Goodhue when their moratoriums terminate in August this year.

The industry believes that silica sand mining in Minnesota is already highly regulated, and that the state has sufficient environmental review and monitoring processes in place to ensure the safe and responsible mining.

But while lawmakers tend to agree on these points, they are concerned about the fairness of a potentially much larger scale sand mining business for companies and land owners in the future.

"Officials in Minnesota are attempting scale back sand mining in the state while they rethink environmental costs."

South-eastern Minnesota’s Senator Matt Schmit introduced a comprehensive bill during a legislative session in February, which calls for a Generic Environmental Impact Statement to address unanswered questions regarding air and water quality, and impacts of large scale mining on the transportation system and local economies.

"There are concerns that demand for sand could increase and if that happens there could be an increase in sand mining in our area. It’s one of those unique opportunities in politics to see a challenge on the horizon and try and get it right ahead of time. That’s the basis for what we are trying to do here," says Schmit.

Schmit is also looking to clarify state roles and proposed a technical advisory team that will bring together experts from agencies such as The Department of Health and the Department of Natural Resources to be made available for local decision makers to gain advice on permitting issues.

The senator explains: "In Minnesota we have a strong push for local control in permitting and land-use decisions I support that, but a lot of our local units of government and decision makers were asking for some more help and clarity and answers from state agencies. They just didn’t have the expertise to answer these questions."

The bill also includes a production tax to pay for things like damaged roads, a measure which Save the Bluffs supports, according to Kaul.

"There are concerns about whether or not [sand] mining is paying enough in terms of taxes to cover expenses generated, for example at 15c a tonne – which isn’t being charged uniformly – is that enough to cover the damage to roads when trucks weighing up to 40 tonnes are going out on the road up to 500-600 times a day?"

Schmit, chair of the Senate Game and Fish Committee, and has included specific language in his Game and Fish bill, passed in March, which would create a one mile buffer between trout streams and water features and mining.

The senator has also called for a year-long moratorium which would prohibit new mines from opening in the state while uniform standards are developed.

Schmit stresses that this provision would not be harmful to the mining industry, but what is the likelihood of a one-year moratorium being approved given the current shale oil and gas boom in the US?

"I think it’s an uphill battle on that," says Kaul. "But what is happening is that there seems to be a strong consensus that there needs to be some tough standards that need to be applied, and there is a lot of support for making sure we do it right."

"The bills that have been advancing have a lot of good language in them, in terms of developing standards and pulling people together from local units of government and experts from the state like the Pollution Control Agency and the Environmental Quality Board," Kaul adds.

South-eastern Minnesota’s legislature has until May 20 before the debate on Schmit’s bills is adjourned. For Schmit, it’s an important moment for the region’s future.

"I think we are poised to have a responsible bill that’s going to address some of these unanswered questions and create a path forward for responsible mining in our region so we are not, two or five years from now, left wondering, what just happened?"

Platinum has retaken its traditional price premium over gold, amid growth in the global economy and supply constraints in South Africa.

The Department of Health