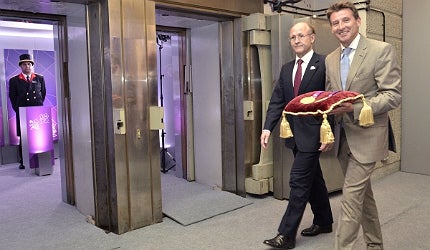 Right now, in the final run up to the London 2012 Olympic Games, there is nothing more precious than bronze, silver and gold. That is, of course, if they have been melted down and moulded into medals.

Thousands of elite athletes are now ready to be presented with these decorations of honour, which have been locked away, along with the crown jewels, in the Tower of London for safe-keeping.

But where did these sought-after medals come from and what processes did they go through to reach the finishing line?

British mining giant Rio Tinto won the contract in April 2011, to provide the metals for 4,700 medals due to be awarded at the London 2012 Olympic and Paralympic Games.

It was then down to this company to dig the ore from its Kennecott Utah Copper mine in Salt Lake City, US, and the Oyu Tolgoi mine in Mongolia.

Mining gold, silver and copper is an every day occurrence for Rio Tinto and this will be the second Olympic Games it has provided medals for – it supplied the ore for the 2002 Winter Games in Salt Lake City – but there’s something special about this particular contract, according to Rio Tinto principal advisor David Outhwaite.

"We are, and have been for 140 years, a British company, so for us it’s a great thing to be involved in," Outhwaite explains.

"Normally, we talk to people in the business and not really the end users, so it’s a great opportunity for us to showcase what we are doing and be part of what is the greatest sporting event around."

So what set the firm apart from its competitors when it expressed interest in the project?

"Also, retailers use us because they know where the metals have come from and can trace what they have been through. This is extremely important," adds Nexhip.

"British mining giant Rio Tinto won the contract in April 2011, to provide the metals for 4,700 medals."

The eight tons of gold, silver and copper used to make the London 2012 Olympic medals started life in an open cast mine close to Bingham Canyon in Salt Lake City.

From there, Kennecott Utah Copper, a mining, smelting and refining subsidiary of Rio Tinto, dug the ore using explosives and diggers. The ore was then crushed before being carried on a conveyor belt to the concentrator, where it was pulverized into a fine powder.

"That just allowed us to upgrade the metals content from the ore, and from that concentrator we pump the material via a pipeline to another operation, the smelter. That’s where I am based," explains Nexhip.

"At the smelter we use some leading-edge technology which was implemented about 20 years ago to make it one of the cleanest smelters in the world. We capture 99.9% of the sulphur from the concentrate, turn that into an active product and make the metal, which contains copper, silver and gold."

The metal was then calved into 350kg anodes – like slabs – which were transferred to Kennecott’s oil refinery by rail. The anodes were then electroplated to separate the copper from the silver and the gold.

After seven months, the final products, which are made up of gold and silver bars and button sized pieces of a 99.9% pure copper cathode, were shipped to the UK.

Supplying the materials for such a publicized event as the Olympic Games was always going to be challenging, but Rio Tinto could not have anticipated the criticism it received regarding its mining activities.

"The gold medal was plated with a layer of gold at a later stage by British coin manufacturer Royal Mint in Wales."

At the time of the contract award, Chris Townsend, the commercial director for the London Organising Committee of the Olympic and Paralympic Games (LOCOG) said he hoped the medals will be "spectacular and sustainable".

Mining campaigners had a different outlook, however, and in April 2012 they took to the streets in protest, claiming that Rio Tinto was tarnishing the Olympic Games by violating environmental protection limits on emissions.

But Rio Tinto says it operates in total compliance with regulations established by the Utah Division of Air Quality and the US Environmental Protection Agency.

"Those standards are based on human health standards," says communications advisor at the Kennecott Utah Copper Office Kyle Bennett. "We are doing everything we can to reduce our impact and we are really proud of the things that we have done."

"The smelter was developed in house by people that came to work, realised we had a problem and had to solve it. However, that’s not to say we don’t have a footprint, but we are operating in complete compliance with the regulations and we work very closely with the regulators here to ensure we are complying."

"Supplying the materials for such a publicized event as the Olympic Games was always going to be challenging."

After the refining process, Rio Tinto’s gold, silver and copper was delivered to the Cookson Precious Metals Group, which was responsible for alloying and plating at its facilities in Birmingham and Spain.

The alloys were made by heating and mixing up the precious and non-precious metals that determine the composition and colour of the metal.

The bronze alloy is 97.0% copper, with 2.5% zinc, which came from metals and mining company Nystar in Australia, and 0.5% tin, which was transported from Cornwall in south-west England.

The gold and silver medals are 92.5 % fine silver known as Standard Silver. The gold medal was plated with a layer of gold at a later stage by British coin manufacturer Royal Mint in Wales.

Royal Mint was also responsible for striking and hand finishing the medals, which were handed over to the LOCOG at a ceremony at the Tower of London on 2 July 2012.

Ecological Restoration Products and Services for the Mining Sector