Women in mining – inspirational voices lead change from within
Menu

Mining is recognised as being one of the most male-dominated industries in the world. A recent study, from Women in Mining (UK) and PricewaterhouseCoopers, suggested that women make up just ten percent of the global mining workforce and five percent of board positions in the top 500 globally-listed mining companies.

Of course, some companies are making more progress than others. At Anglo American, more than 15% of the workforce are women – and the company is aiming for 30% by 2014.

"Some companies are making more progress than others. At Anglo American, more than 15% of the workforce are women."

At Rio Tinto women make up 18% of the entire workforce, with the proportion of women on the board being 14% and in senior management 15% – and one of its targets is for women to represent 20% of senior management by 2015. But in countries such as China or Chile, female representation can be as low as zero to one percent.

However, if you consider that it was technically illegal for a woman to go underground in a mine in South Africa as little as ten years ago and women were not permitted underground until 1986 in Western Australia, then it is clear that progress is being made.

Studies, such as that from Catalyst which showed companies with female board representation have a higher return on sales, and McKinsey’s Women Matter, which demonstrates that corporations with women at the top have better financial returns than those without, are also helping to drive the push towards a more gender-balanced future.

Support and networking from women in mining groups and publicity surrounding successful role models are gradually influencing the imbalance.

In fact, many of the successful women in mining that we hear about today were inspired to join the industry as a result of contact with a role model when they were young. 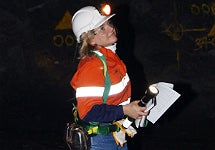 This is true for Alex Atkins, a single mother of two, whose mining journey started at the age of 17 after an aspirational mining student visited her high school in Perth Australia.

Currently an Associate Principal for Optiro and Chief Adviser for Sustainability, with more than 20 years’ experience, she started working for Kalgoorlie mine in 1986, when women were first allowed to start working underground.

"This meant things like ablutions and work methods were designed for men only and many miners were against women working underground," said Alex.

"But over the years this sentiment has mostly dissipated. Today you can go to a mine site and find a decent number of women performing roles not considered for women prior to the 1990s, like mine managers, supervisors, drillers, plant operators and shot firers."

"Corporations with women at the top have better financial returns than those without."

A challenge career women face in practically every industry is raising children while achieving career goals within a corporate structure.

Although Atkins acknowledges that having children and working in mining has its challenges (she now does flexible consultancy work and cannot travel extensively), she believes the "mining industry is generally supportive of mothers who want to keep their mining careers going, as long as the arrangement fits their business plans".

Sabina Shugg, Head of Mining with Momentum Partners and founder of Women in Mining in Western Australia, also says attitudes towards gender diversity are changing.

"Industry groups are leading change and creating initiatives to improve awareness of issues around attitudes towards gender diversity," she said.

Having grown up in Kalgoorlie and then Perth, she was initially an exploration field assistant before working with the geologists colouring in the assay plots at the newly-opened Jubilee gold mine.

"There were lots of opportunities for those that were prepared to have a go and show a bit of initiative, so I progressed up the food chain fairly rapidly," she said.

In March 2010, Shugg was named the inaugural Women in Resources Champion in the Chamber of Minerals.

The 2013 Women in Resources Champion crown was awarded to Julie Shuttleworth, General Manager of Granny Smith Mine for Barrick Gold Corporation.

Shuttleworth has had around 18 years’ experience in the gold and copper mining industry in Australia, China and Tanzania.

During this time has progressed from plant metallurgist to general manager positions.

"Gender doesn’t even enter my mind when I am doing my job," she said, who describes mining work as exciting, challenging, fun and very rewarding.

"A challenge women face in practically every industry is raising children while achieving career goals within a corporate structure."

"Women that are successful in mining have got on and done their job, been recognised for their technical ability and leadership skills and what they deliver to the business," she said, adding that having a positive attitude and self-confidence is key.

For Shuttleworth, the most effective way of getting more women on management boards is through a combination of individual career development plans, good sponsors and supportive mentors.

As for getting more women into mining, she believes role models that connect with teachers, parents and students, as well as positive media targeting the general public, are influential factors.

Cornelia Holtzhausen, General Manager of the Anglo American’s Thabazimbi mine, in South Africa, supports the notion that mining is really about people. "At first when you go into mining you think it’s all about rocks and equipment, but you eventually realise it’s more than that," she said, having progressed from a training metallurgist to now being the first female general manager at Thabazimbi.

Holtzhausen grew up in a mining community and while she says she never thought of mining as something a woman shouldn’t do, she does come across scepticism about having a female in the role.

"We’re not at a point where full transformation is achieved, but acceptance is growing for what women can bring," she said.

"Women must challenge their own comfort and realise the possibilities this environment has to offer, and attitudes of both males and females needs to be shaped by the pioneers in the environment." 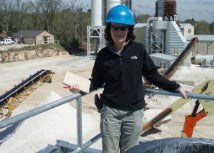 Now Associate Director of Geology and Business Development at Wardell Armstrong International in London, during her career Liv Carroll has carried out studies for mineral opportunities in various African nations, presented at the House of Commons on the mineral opportunities of Tanzania and at the House of Lords on the development of the mining industry in Sierra Leone.

"You work with a diverse range of people across many skills sets, get to spend lots of time outdoors and you never cease to be learning," she said, adding she does not feel that she has personally faced more obstacles as a female, even though the industry can be dangerous, dirty and remote.

"While there may still be individuals who believe that a female who is unable to lift a core box alone should not be in the field or on a mine site, these opinions are dying out with those of the ‘old school’ mind set," she said. 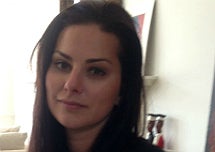 Van Dyke, who started her career as a gemmologist trading diamonds, says she has come across some obstacles in her career as a result of her gender, but believes that being different can be a plus as well as a hindrance.

"The initial reaction to a woman can be a look askance, but on the whole, my experience is that practicality rules the day, and if you can demonstrate you can do the job effectively, no one cares if you are male or female," she said.

To get more women into the industry, van Dyke believes publicity is the major driving force. "I have never heard a little girl say I want to be a miner when I grow up," she said.

"Women are attracted to mining when they realise that it provides very good job experience. Community relations, project management, geological surveying, the list of roles within the mining industry is endless, it’s actually very exciting, you just need to know about them, and that is where publicity is required." 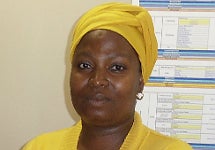 Queen Hlotse grew up in a rural community and dreamed of a better life for herself – initially she wanted to be a doctor, but later changed her mind and became a mining engineer. Now Shift Supervisor at Mogalakwena Mine, which is part of Anglo American’s Platinum business, she leads and coaches a team of 140 operators and foremen to ensure that drilling targets, of around 3,800 metres per day, are met.

Hlotse believes that as a female she has faced more obstacles in mining than her male counterparts. "I initially struggled to carry heavy metals, and many of the males I worked with would chastise me, as they expected my strength levels to match theirs," she said.

"Another example is when I first started as a drill rig operator. My colleague and I were the only two females working in this capacity, and the first in the drilling department. Our male colleagues told us that we would not be able to pick up heavy cables (drill bits) or load them on machines, and adequately operate a drill machine."

Hlotse says that excelling as a drill rig operator surprised her male colleagues and she now feels awareness programmes for men working in mines would be beneficial – where gender diversity is discussed and the importance of respecting all colleagues, including women, is reiterated.

She also feels that young girls should be encouraged to pursue maths, science and engineering subjects, and education in schools and universities surrounding the "exciting career opportunities that await women in the mining industry" should be improved.

Mining in Africa – now is the time for change