Belaz 75710, with a payload capacity of 496t, is the biggest mining dump truck in the world. The ultra-heavy dump truck was launched by the Belarusian Company Belaz in October 2013 under an order from a Russian mining company. Sales of Belaz 75710 trucks were scheduled to start in 2014.

The truck is 20.6m-long, 8.16m-high and 9.87m-wide. The empty weight of the vehicle is 360t. Belaz 75710 features eight large-size Michelin tubeless pneumatic tyres and two 16-cylinder turbocharged diesel engines. The power output of each engine is 2,300HP. The vehicle uses an electromechanical transmission powered by alternating current. The top speed of the truck is 64km/h.

Caterpillar 797F, the latest model of 797 class dump trucks manufactured and developed by Caterpillar, is the second-biggest mining dump truck in the world. The truck has been in service since 2009. It can carry 400t of payload compared to its predecessor models 797B and the first generation 797, with payload capacities of 380t and 360t respectively.

The dump truck has a gross operating weight of 687.5t and measures 14.8m in length, 6.52m in height and 9.75m in width. It is equipped with six Michelin XDR or Bridgestone VRDP radial tyres and Cat C175-20 four-stroke turbocharged diesel engine. The single block, 20-cylinder engine offers a gross power output of up to 4,00HP. The truck uses a hydraulic torque converter transmission and runs at a top speed of 68km/h.

Komatsu 980E-4, introduced by Komatsu American Corporation in September 2016, has a payload capacity of 400t. It is the biggest electric drive rear dump truck from Komatsu. Fitted with big bucket shovels with a capacity of up to 76m3, the Komatsu 980E-4 is suitable for large-scale mining operations.

The gross operating weight of the truck is 625t while its loading height and the width are 7.09m and 10.01m, respectively. The vehicle is powered by a four-cycle diesel-fired 3,500HP Komatsu SSDA18V170 engine with 18 V-type cylinders. It uses GE dual insulated-gate bipolar transistor IGBT) AC electric drive system and can run at speeds of up to 61km/h.

Terex MT 6300AC, introduced by the American manufacturer Terex in 2008, is also an ultra-class mining dump truck with a payload capacity of 400t. The vehicle was rebranded as Bucyrus MT6300AC, following the acquisition of the mining equipment division of Terex by Bucyrus in 2010. Terex MT 6300AC became a part of Caterpillar’s Unit Rig line after Caterpillar’s acquisition of Bucyrus in 2011.

The gross operating weight of the vehicle is 660t. The body of the truck is 7.92m in height and 14.63m in length. The vehicle is equipped with a four-stroke diesel engine, with 20 cylinders powering an AC electric alternator, which in turn supplies power to the electric motor fitted at each side of the rear axle. The rated power output of the engine is 3,750HP. The vehicle can move at a maximum speed of 64km/h.

Liebherr T 282C and Liebherr T 284 are two 400t payload capacity ultra-class haul trucks designed and manufactured by Liebherr. The trucks share the distinction of being the second biggest mining trucks with Caterpillar 797F and Terex MT 6300AC. Liebherr’s T 282C is the successor to the 360t capacity T 282B class mining truck. T 284, the latest class of trucks from Liebherr, shares many similar features with the T 282C.

The gross weight of T 282C and T 284 is the same, at 661t. The overall length of the trucks is 15.69m. The overall width and the loading height are 9.679m and 7.42m respectively. The vehicles are equipped with a 20-cylinder diesel engine with a gross power output of up to 3,750HP. The vehicles use the Liebherr IGBT AC electric drive system. The maximum travel speed of the vehicles is 64km/h. 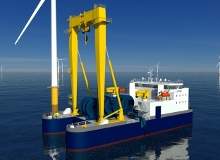 Belaz 75601 has the capacity to haul 396t of payload. It is the latest model of 7560 class of trucks designed by Belaz for carrying loosened rocks at deep open-pit mining sites under different climatic conditions.

The gross operating weight of the vehicle is 672.4t. The Belaz 75601 measures 14.9m in length, 9.25m in width and 7.22m in height. The dump truck uses electromechanical transmission with a four-cycle diesel engine, having 20 V-type cylinders. The engine’s power output is 3,750HP. The traction motors and the traction alternator are provided by Siemens and Kato respectively. The top speed of Belaz 75601 is 64km/h.

The gross weight of both trucks is 635t. The loading height and width are 7.14m and 9.19m respectively. The overall lengths of Komatsu 960E-1 and Komatsu 960E-1K are 15.6m and 15.34m respectively. Both vehicles are powered by a four-cycle diesel engine with 18 V-type cylinders. The power output of the engine is 3,500HP. Komatsu 960E-1 uses GE dual IGBT AC electric drive system, whereas the 960E-1K uses Komatsu IGBT AC electric drive system. The top speed of both trucks is 64km/h.

Terex MT 5500AC, also known as the Unit Rig MT 5500AC, ranks as one of the biggest mining dump trucks in the world. The 360t payload capacity vehicle is used for high volume surface mining.

The maximum gross vehicle weight of Terex MT 5500AC is 598t. The overall length is 14.87m while the width and loading height are 9.05m and 7.67m respectively. The vehicle is powered by a four-stroke Diesel engine rated at 3,000HP with 16 cylinders. The vehicle uses an AC electric drive system and travels at a maximum speed of 64km/h.

Belaz 75600 is currently one of the largest mining dump trucks in the world. It is the first generation model of Belaz’s 7560 class mining trucks designed for transporting rock-mass at deep open-pit mines under different climate conditions. The haul truck offers a payload capacity of 352t.

The maximum gross weight of Belaz 75600 is 617t. The overall length, width and loading height are 14.9m, 9.6m and 7.47m respectively. The vehicle is powered by a four-cycle turbocharged diesel engine with 18 V-type cylinders. The gross power output of the engine is 3,500HP. The traction alternator for the vehicle is provided by Kato and the traction motors are provided by Siemens. The maximum travel speed of the truck is 64km/h.

Caterpillar 795F AC has a payload capacity of 345t. The haul-truck features a modular design and offers two body options, including the popular MSD (mine specific design) and the gateless coal body.

The gross machine operating weight of Caterpillar 795F AC is 628t. The truck’s overall length is 15.14m. The overall width and the loading height are 8.97m and 7.04m respectively. The vehicle is powered by Cat C175-16 diesel engine with a gross generating capacity of 3,400HP. The truck uses an AC electric drive system solely designed and developed by Caterpillar and runs at a top speed of 64km/h.

The Hitachi EH5000AC-3 has a payload capacity of 326t. It is Hitachi’s latest and largest rigid frame dump truck and was introduced at MINExpo International 2012 in Las Vegas, Nevada, in 2012.

The gross machine operating weight of Hitachi EH5000AC-3 is 551t. The overall length of the truck is 15.51m. The width and loading heights are 8.6m and 7.41m respectively. The truck uses the low-emission Cummins QSKTTA60-CE diesel engine with 16 cylinders. The rated power output of the four-cycle engine is 2,850HP. The vehicle uses Hitachi’s IGBT AC electric drive system and runs at speeds of up to 56km/h.