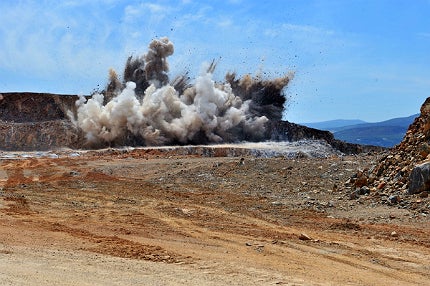 Blue Dog Scientific, a UK-based consultancy headed by leaders in the rock blasting detonics industry, has brought together experts to give their insight into the inner workings of this mining technique.

Their approach to this subject focuses on the science behind "how commercial explosives work and how rock responds dynamically to explosive loading."

Because there is a minimal amount of information on rock blasting made available to the public, Dr Gary Sharpe, director of Blue Dog Scientific, and his colleagues aim to educate and provide a "a fresh and independent, knowledge based approach" to training individuals who are working in the mining and quarrying industries.

"The primary issue facing the industry, according to Dr Sharpe, is the "effect of a commercial explosive on rock"."

The usual method used in mining involves commercial explosives which are mainly made up of ammonium nitrate. The primary issue facing the industry, according to Dr Sharpe, is the "effect of a commercial explosive on rock" as well as the "type of rock being blasted, such as whether it is a hard rock like granite or a soft rock like sandstone."

Because of the complexities involved in this kind of work, Blue Dog Scientific has come up with a modern approach to "blast design" that enables mining engineers to achieve the most efficient, cost-effective and safe rock breaking results.

As a result, the Blue Dog Scientific team has taken rock blasting to a new level, by creating a more methodical process of blasting using "computational simulation tools," which uses research findings and analysis taken from the data of real blasts.

The Blue Dog Scientific team collected extensive databases on the real rock blasts that they required to develop their models. They incorporated data from very substantial literature searches of published materials and internet sources.

These included a global network of contacts in the blasting world, who the team worked alongside for several years, and also through contracts and projects where confidential information is provided.

The team, explains Dr Sharpe, usually needs a very little "information about the explosive composition and a small amount of measured properties and, similarly, properties and measurements of the rock being blasted." Afterwards the team has to continually examine the predictions of the models alongside the conclusions of the real blast measurements and observations.

Dr Sharpe reveals that one of the main challenges for both the mining and quarrying businesses involves the "large turnover of blasting engineers and the chain of experience and apprenticeship that is being broken." Furthermore, the "trial and error approach" that is currently being used in both industries, does not always apply to all mining explosives and practices.

"The Blue Dog Scientific team collected extensive databases on the real rock blasts that they required to develop their models."

Sharpe also emphasises that experimental methods being used are unproductive because of the "enormous amount of variables" involved in order to achieve one blast. Because of this problem, mining engineers have been looking for alternative techniques to tackle the uncertainty involved in rock breaking.

Furthermore, one of the key difficulties that the industry faces is the false selling of products and services using "pseudo-scientific arguments and concepts," which to a large degree is damaging and costly. The modules are essentially intended to be myth busters.

As a result of the issues concerning the mining and quarrying industries, Blue Dog Scientific has brought together experts that have researched rock blasting for decades and the information is now developed enough to be applied and transferred to both industries.

"Mining engineers have been looking for alternative techniques to tackle the uncertainty involved in rock breaking."

The Blue Dog Scientific team has been concluding a preliminary series of modules, which are based on decades of prior experience of providing detonics education and training to senior technical professionals from across the globe. Currently Blue Dog is using a mixture of media and computer graphics.

These primarily include "intuitive visual insights via advanced computer simulation." The group provides a deeper look into the physics of blasting using informative and easy to understand explanations. Furthermore, they supply "high speed movies of real blasts and blasting processes."

The modules involved come in "E" series for commercial explosives, "R" series for dynamic rock mechanics, "S" series for stemming dynamics and "F" series for dynamic fragmentation, cracks and joints and their interactions with shock waves. Industry professionals and businesses are then given the opportunity to choose and create a "reference library" from the modules that are applicable and available to their work.

The benefits of these blast modelling modules that were created by the consultancy’s in-house software, are both the educational and solution part of the business. Each element will supply the mining and quarrying industry with problem solving techniques. They will also provide rock breaking technical teams with an improved foundation on blasting, while promoting the efficacy of advanced modelling technologies.

The aim of the modules, according to Dr Sharpe, is to make relevant topics, concerning rock blasting, accessible to all. They focus on the "need-to-knows" of rock blasting by being quantitative, but removing all the mathematical elements from this type of information.

One of the major elements of blasting is called stemming, which involves "topping off the boreholes" or drilled holes using sand or gravel to keep any type of explosive pressure from escaping. Unfortunately, there is not much understanding in the industry concerning the actual process by which this technique works.

Blue Dog’s main innovation is their software which allows them to engineer design solutions for methods such as stemming. The module series that will focus on this procedure will not only provide the explanations and the evidence of how stemming works, but will also provide technical engineers with the language required to train them to use the software.

As water experts warn of a serious global water shortage, the need for sustainable water management within the mining industry has become critical.