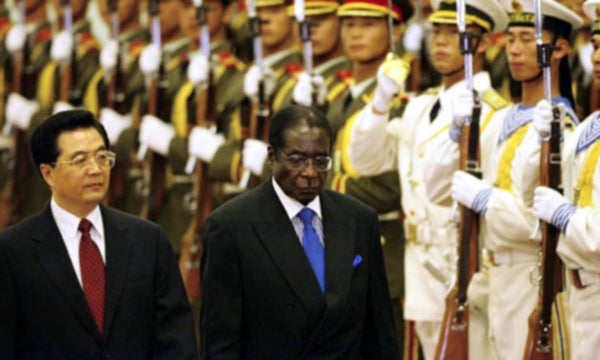 Since 2008, Zimbabwe has seen a recovery after nearly a decade of economic crises, during which output had decreased, cumulatively, by more than 45% – with mining’s doubling of growth playing a significant role in driving real GDP between 2009-11 up by 20.1%, according to World Bank data.

The country’s economy performance has, however, long been dictated by its political fortunes. The formation of a coalition ‘unity government’ in 2008, for example, pleased the markets and international community, and saw overall foreign direct investment increase nearly eight-fold, to some $400m in the years 2008-11.

With the economic rebound having now moderated down to an estimated five percent, and the current administration once more looking to the mining sector to buoy up national coffers, such investment will again prove key.

"The country’s economy performance has, however, long been dictated by its political fortunes."

The problem is that Mugabe and his Zanu PF government do not have a particularly good history with the mining industry. The controversial indigenisation and empowerment law of 2008, which mandated that 51% of company shares be held by indigenous investors or the state, was not well received, while in 2009, the Reserve Bank failed to pay miners for their gold, and in 2010 it defaulted on bond repayments.

As recently as May, just two months before the election, the then government’s draft minerals bill – with ramifications for everything from marketing to environmental management – showed that the desire to increase state involvement has clearly not gone away.

Harare’s assertion that "a colonial minerals regime based on claims is inappropriate for using national mineral assets to underpin wider development and industrialisation" may well be true. However, if its proposed replacement – like the previous move to enforce indigenous majority shareholding – simply frightens mining investors away, then it will surely be the worst kind of own-goal.

As the World Bank recently commented "uncertainty about the implementation of the indigenisation programme negatively affected overall growth in the mining sector, beyond the growth in diamonds and gold." Zimbabwe’s recovery, the Bank concluded, remained fragile, with a number of issues standing in the way of sustainable economic growth.

The mining sector could, of course, undoubtedly once again provide a major engine of any such growth. Calling for the lifting of EU sanctions on the state-owned Zimbabwe Mining Development Corp. (ZMDC) – which produced a reported eight million carats in 2012 from its mines in the Marange diamond fields – Belgium says this alone would increase Zimbabwe’s tax revenue by around $400m a year.

"The problem is that Mugabe and his Zanu PF government do not have a particularly good history with the mining industry."

In February 2013, in an attempt to ensure that Zimbabwe’s July election would be fairly run, EU foreign ministers agreed to lift them within a month of the poll, unless all of the member states denounced it as corrupt. The subsequent vote – which met with broad approval from African electoral observers – was ultimately to return Mr Mugabe to power with more than 60% of the poll and give Zanu PF a two-thirds majority, despite allegations of fraud from defeated political rival, Morgan Tsvangirai.

Although Europe has made clear that it has some "serious concerns" about irregularities in the process, it has stopped short of refusing to recognise the outcome.

With Antwerp, the centre of the world’s diamond trade, calling for sanctions to be lifted, Belgium has left itself open to accusations that there might be more than a little vested interest at work, but there is an undeniable logic to Belgian demands. EU states must either unanimously declare the poll not to be "peaceful, transparent and credible" – or honour their pre-election commitment. However bitter a pill it may prove for many members to swallow – not least the UK, as Zimbabwe’s former colonial power – the consensus is growing around European capitals that ZMDC will eventually be de-listed.

"The mining sector could, of course, undoubtedly once again provide a major engine of any such growth."

Whether that will be just the beginning remains to be seen, but Harare does seem to be setting out its stall to attract foreign investment, with the recent announcement of its intention to issue the first government bond to finance mining activities.

Details of this have not been completely fleshed out, but the reasoning is clear. If mining is to help drive future national growth, then the sector needs additional support to overcome high costs and falling commodity prices – something which Dr Bill Conerly, economist and chairman of the Cascade Policy Institute, believes will be a feature for some time to come.

Zimbabwe certainly has the resources, but until those minerals are located, extracted and processed into a tradable form, they are of no help to the economy – and achieving that demands money up-front.

The situation with platinum is a prime example; the country has the world’s second largest reserves, and the latest ‘Zimbabwe Mining Report’ from Business Monitor International (BMI) tips it to be the best potential driver of growth in the years to 2017. In October, the Platinum Producers Committee stated that the industry requires perhaps as much as $5.3bn to expand production from the current year’s forecasted 365,000 ounces to more than 500,000 ounces, and construct the necessary refineries.

A well-structured bond issue could be the answer, but it might be a hard idea to sell to investors, after years of policies based on confiscation and enforced ‘indigenisation’. Reputations like that are hard to shake, and few believe that the Zanu PF leopard is going to change its spots any time soon. In August, John Robertson, director of the Robertson Economic Information Services described the country as "the least attractive investment destination worldwide" – a sentiment shared by BMI, which predicts investors will look elsewhere in Africa, where the regulatory environment is more attractive.

If so, then the Mugabe government is likely to find China eager to fill the void. In April, during the last months of the unity government, Beijing was granted ‘special mining rights’ for the country’s uranium and diamonds, in return for providing military hardware and undertaking to build Zimbabwe a nuclear power plant.

"If mining is to help drive future national growth, then the sector needs additional support to overcome high costs."

It comes after a period when Harare has reportedly been effectively mortgaging mineral wealth to the Chinese, in exchange for what have been described as ‘opaque’ loans, which according to Nehanda Radio, the administration has struggled to repay – further increasing Chinese leverage.

The focus of foreign direct investment might, then, be about to change; shareholdings seem of less appeal to Beijing than access to minerals, so the indigenisation requirements that have so spooked western interests in recent years appear to form much less of a concern. BMI conclude that "such an arrangement could well be preferable for President Robert Mugabe, who might prefer to deal with Chinese investors willing to take a minority stake in Zimbabwean mining operations, and who would bring significant amounts of funding to the sector."

The tide may indeed be turning, but it could well be flowing east.