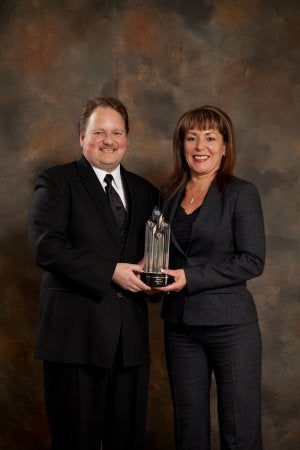 Suncor Energy recently awarded both its training department and VISTA Training one of eight coveted President’s Operational Excellence Awards, for the implementation of the innovative TruckLogic haul truck operator training curriculum at its oil sands mine in northern Alberta.

The mine implemented TruckLogic as a pilot programme in April 2010 at its large oil sands mine near Fort McMurray, Alberta, Canada, where it resulted in a 50% drop in incidents and a 4.5% increase in productivity. These improvements have continued to hold over a year later. TruckLogic is now used to train all the mine’s new equipment operators.

"We’re extremely pleased that Suncor recognised the contribution that TruckLogic has made to the safety and efficiency of the mine’s operations," said Bruce Rabe, CEO of VISTA Training. "We were very fortunate to partner with a mining company as progressive as Suncor on this project. With its far-reaching journey to zero programme, they are truly a world leader in fostering a safe, productive working environment for all of its workers and contractors."

The focus of journey to zero, as its name implies, is to embed a safety culture into every aspect of Suncor’s business, so it can achieve injury-free work sites. The President’s Operational Excellence awards honour the employees and contractors who demonstrate an exceptional commitment to health and safety. The award was presented by Rick George, chief executive officer, and Steve Williams, president and chief operating officer of Suncor Energy on 1 November 2011 at a ceremony in Calgary, Alberta.

A handful of new and emerging technologies are transforming how mining equipment operator training is...