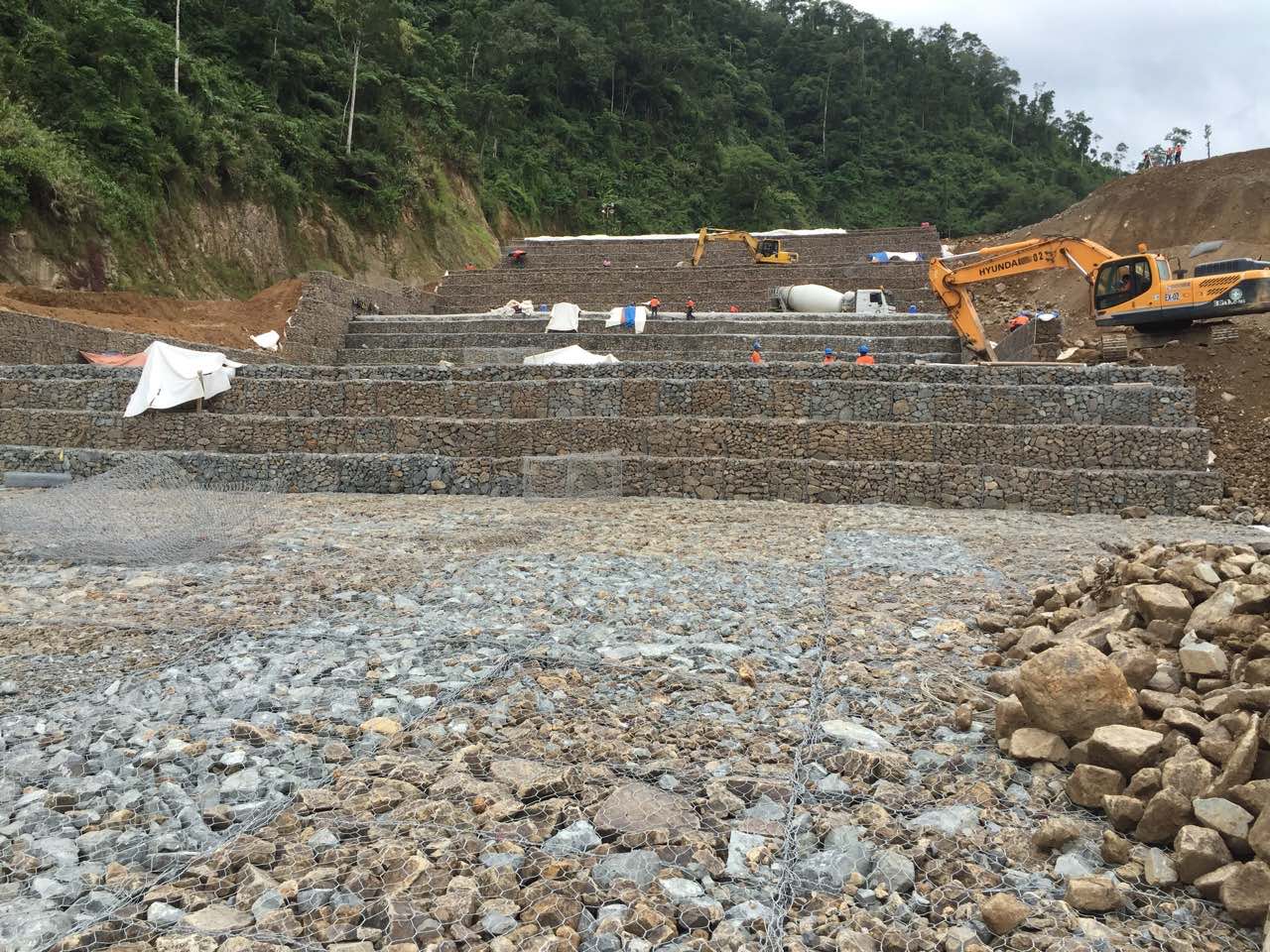 A gold and molybdenum mine in Nueva Vizcaya, in the Northern Philippines required a 40m-wide emergency spillway to handle run-off from a residual storage impoundment (RSI). Heavy rains and typhoons put the impoundment at risk of overflow which, unless contained, may cause soil erosion. A spillway structure was constructed using Maccaferri’s combined solution, including Terramesh® System, gabions and Reno Mattresses. The Terramesh® units were back-lined with MacTex® non-woven geotextiles and reinforced with MacGrid® geogrids.

GHD Philippines spearheaded the design of the spillway opting to use Maccaferri’s Terramesh® System combined with gabions. The top portion of the spillway provided a 40m-wide channel constructed from Polymer-coated Reno Mattresses (6m x 2m x 0.5m) capped with concrete. At the end of this section of the spillway, a row of 0.5m-high gabions were positioned to act as a weir on top of the first 6.5m cascade. The cascade was formed using Terramesh® System units backfilled with a compacted clayey-gravel aggregate. Each Terramesh® unit was filled with locally sourced boulders and back-lined with a 500gsm non-woven geotextile (MacTex® MXL90) to prevent migration of materials through the boulder-lined Terramesh® facing.

Below the first cascade, the spillway and cascade structure was repeated a further five times; spillway length between each cascade varying from 12m to 35m to accommodate the area’s topography. Cascade heights varied from 3m to 6m with a final cascade of 5m in height leading to concrete spillways and cascades. The total height from the top to bottom of the Terramesh® System cascades amounted to 33m.

In some areas, the sides of the spillway were constructed from gabions 3m to 4m in height. In other areas, Terramesh® System units with MacGrid® geogrids were used to reinforce the spillway walls particularly where the spillway abutted steep slopes.

Work on the spillway commenced in June 2016 and this phase of construction was completed in early 2017, in plenty of time for the typhoon season. Site requirements may dictate the need to raise the dam level and implement a further spillway and cascade in the future.

The structure looks elegant, blends well with the local environment and provides a high level of safety from overspills and excess run-off.

Maccaferri UK and Ireland technical manager Nicola Brusa is to be a guest speaker at...

A MacRes wall was chosen for a coalfield that needed to be developed from an...

It was the client's plan to put up one more central ore handling plant consists...