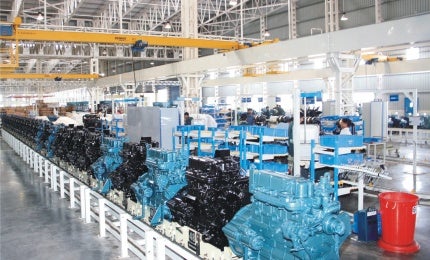 Kirloskar manufactures more than 225,000 diesel engines annually that are used for over 100 applications in segments such as mining, offshore, construction, material handling, earth moving, fluid handling power generation, agriculture and agro-industrial, in addition to defence and marine applications.

Kirloskar Green is one of the leading brands in Gensets with more than 50,000 generators manufactured each year. The Kirloskar Green brand is currently available in power ranges from 10kVA to 625kVA in both 50Hz and 60Hz, with future plans to extend this to 1,000kVA.

Kirloskar Green generating sets are designed to provide a reliable source of power even in tough, intensive conditions.

The generators are available as open sets or silent sets with weather and sound-proof enclosures, with options for manual or automatic mains failure functions.

Kirloskar has an extensive range of emission-compliant water-cooled diesel engines as follows:

Kirloskar’s engines are used in Indian operations by global OEMs, such as:

The R series water-cooled engines are supporting mining equipment in South Africa, where Kirloskar’s engines are installed in heavy equipment such as underground LHDs and dump trucks.

Kirloskar offers an extensive selection of agri pumpsets and agro-industrial engines in power ranges of 3kW to 20kW. These engines are designed for rugged conditions and serve as reliable prime movers for mining and industrial applications.

The engines are used for fire suppression system installations as they are cost-effective, robust and reliable. Kirloskar’s FM-approved and UL-listed engines are available in 19 different power ratings ranging from 45kW to 245kW and speeds from 1,760rpm to 2,600rpm.

Incorporated in 1946, Kirloskar Oil Engines Ltd is the flagship company of the Kirloskar group from India. Kirloskar has four state-of-the-art manufacturing units of diesel engines in India offering world-class products that are exported to more than 35 countries worldwide.

Kirloskar Oil Engines’s mission is to become a truly multinational business by powering vital industries with reliable engines and a first-class after-sales service.