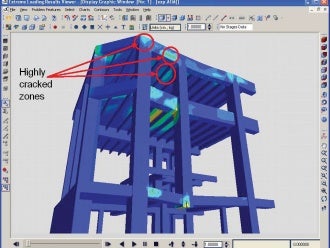 Fairwinds Tower is a 48-storey, 800ft tall building with 1.5 million square feet of space and an expected price of about $880m by completion.

The building consists of a high-rise tower and a podium and it was announced that it would become the official headquarters for an international bank upon completion.

In the light of post 9-11 building code requirements, the overall vulnerability of the structure has to be assessed to determine its safety, relevant to both man-made and natural hazards.

Security management consultants reviewed the possible threat scenarios to the structure and determined that there is a risk of an explosives-laden vehicle.

ASI was contacted to assess the structure’s vulnerability under several scenarios with different positions for the blast inside and outside the building, with different weights for the explosive charge, taking into consideration vertical loads inherent in the structure.

ASI was able to:

ASI provided recommendations to reduce or eliminate high and extreme risk zones by performing changes in the structural design, structural materials, column spacing and limiting access to some
extreme-risk areas of the structure.