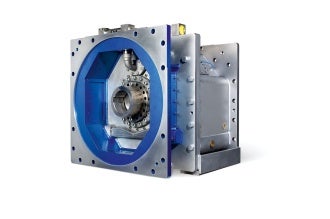 An additional 350,000 metric tonnes (mt) of coal production a month has been made possible at the Chinese Sandaogou coal mine in Shaanxi Province, thanks to the powerful CPC 1600 AFC (armoured face conveyor) coupling.

This fluid coupling can continuously transmit up to 1,600kW. That represents 60% more power than with standard fluid couplings of comparable installation space. With the CPC 1600 coupling, Voith can offer its mining customers a robust but compact design. Voith engineers achieved this increase in power density with the innovative XL profile design turbine wheel.

To be able to efficiently mine a coal face measuring 7m-high, 350m-wide and more than 3km-long, the operator of the Sandaogou coal mine needed equipment that is considerably more powerful. The challenge was that the existing drive system was not able to transfer the necessary power to the conveyor.

The China Coal Zhangjiakou Coal Mining Machinery Co. Ltd., one of the largest Chinese OEMs and equipment suppliers to the Sandaogou coal mine, chose a drive system with the Voith CPC 1600. The couplings combine maximum power transmission and small size. Orders for three CPC 1600s have been delivered and are currently in use in the Chinese Sandaogou coal mine.

Tong Xiangyang, team leader of a coal face in the Sandaogou coal mine, is very satisfied with the power and reliability of the Voith hydrodynamic coupling. As a result of using the new CPC 1600, the coal mine can turn out an incredible additional 350,000mt of coal a month.

The CPC 1600 protects motors and drive components against damage

"Since there is no mechanical connection between the input side and the output side of the coupling, we can run our motors up to speed without load. We switch the motors on one after another to avoid high current demands that would place an unnecessary load on our grid power system", said Tong.

The CPC 1600 fluid coupling also protects the motors against overload. This overload protection is possible since the fill-controlled fluid couplings simply slip because of the hydrodynamic principle. This slip protects the drive components and the chain of the AFC against damage. Consequently, the fluid coupling maximises the availability of the entire system and its productivity.

Start-up the AFC in any situation

Tong’s team can start its AFC in any situation.

"With the CPC 1600, users in Sandaogou can perform as many start-ups in a row as they wish", explained Tang Min, general manager of Startup Components at Voith in China.

"This is important, for example, in order to break free a heavily loaded conveyor. In this way, the personnel avoid needing to manually clear the overloaded system, which is time-consuming and results in costly, unplanned downtime."

Improved performance with no unplanned downtime

Zhiangjiakou Coal Mining Machinery had good reasons for choosing the Voith CPC 1600. The coupling scored well with its impressive performance data, small size and robust design. Tong and his team are extremely satisfied with the improved performance of their AFC thanks to the couplings from Voith, the German manufacturer of fluid couplings. The miners can appreciate this day after day since there have been no unplanned downtimes and production is running at considerably higher efficiency since the new AFC was commissioned in May 2012.

The CPC 1600: maintenance-free with a long service life

The Voith CPC 1600 hydrodynamic fluid coupling uses water as the operating medium. As a result, users avoid expensive explosion protection measures. Moreover, water is environmentally friendly and almost always available underground in coal mines. The fluid coupling power transmission is wear-free and requires little maintenance. These features result in extremely long life cycles. Voith fluid couplings are insensitive to environmental effects such as dust, dirt and moisture and are ideally suited for rough use in the underground coal mining industry.

Annual increase in output of 4.2 million mt of coal

The Chinese coal mine at Sandaogou is located in Shaanxi province, roughly 700km west of Beijing.

Currently, the mine has an annual output of ten million mt from two longwall coal faces. Before using Voith fluid couplings at one of the coal faces, the mine produced 5.8 million mt of coal annually. Thanks to the new couplings on one AFC, output has now risen by an additional 350,000 mt a month. Taken over a year, this translates into an annual production increase of 4.2 million mt of coal. Production at the face concerned has thus more than doubled.

Image: The CPC 1600 hydrodynamic fluid coupling for armoured face conveyors can continuously transmit up to 1,600kW at 1,500rpm; 60% more power than with standard couplings of comparable installation space. Photo: courtesy of Voith.

Voith Turbo provides fluid coupling and drive solutions for the efficient and reliable operation of...

The Right Voith Drive Solution for Every Belt Conveyor

The Indonesian mining company Bukit Asam has always been pleased with the reliability of its...