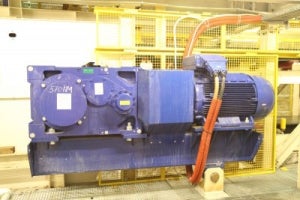 In an extremely demanding construction project in the Swiss Alps, at an altitude of around 1,700m and almost 600m inside a mountain, large chambers are being excavated to form the new expanded underground centre of a pumped storage hydroelectric power station that will increase its present power output from 480MW to 1,480MW. With an extreme incline of 45° and a height difference of approximately 180m, conveyor systems in a sub-station are transporting 500t of excavated material per hour, around the clock, using conveyor belts that are driven by NORD industrial gear units.

The ‘Linthal 2015’ expansion project will upgrade three existing power station systems and increase their overall output power from 480MW to 1,480MW. A new underground pumping station will drive water from a lower reservoir at an altitude of 1,860m into a lake reservoir which is about 600m higher. The pumped storage power station will use this elevation difference to produce hydroelectric power on demand. The client for this project is Kraftwerke Linth-Limmern, a part of Axpo Holding.

The power requirements of a national electricity grid are subject to large fluctuations over the course of a single day. At night, power consumption is at a minimum and typically reaches a peak at midday and in the evening. In Switzerland, electric power is mainly supplied by nuclear and river-based hydroelectric power stations. Biomass and conventional thermal power stations also make a contribution. In contrast to nuclear and river-based plants, pumped storage hydroelectric power stations can rapidly respond to changes in demand. The optimum interplay between these various types of power generation technologies ensures that a reliable and economic power supply is maintained around the clock.

Unlike pure storage power stations, pumped storage stations cannot just generate energy at peak times; they can also convert excess power, which is generated during periods of low demand, into valuable peak-time energy. The demand for peak energy is continuously increasing throughout the entire European grid network. Apart from the general increase in annual consumption, another important reason for this is the intensive development of wind energy in the coastal regions of the European Union. This factor results in an increase in the so-called stochastic energy, which depends on random wind conditions and therefore cannot be reliably planned.

If power from wind energy is generated in times of low demand, the excess can be used to pump back water into the higher reservoirs of pumped storage power stations. If there is no wind during the day, pumped storage power stations can then cover this power deficit. A further reason for the increasing demand for peak energy is the opening of the electricity market. As power can be purchased by consumers from anywhere on the free market, power distribution networks must increasingly be regulated by system services, which ensure a reliable supply.

"Conveyor systems in a sub-station are transporting 500t of excavated material per hour using conveyor belts that are driven by NORD industrial gear units."

Pure hydroelectric power stations have an upstream reservoir. In contrast, pumped storage plants have an additional lower reservoir. If power is generated, water from the upper reservoir flows into the pressure system. The water drives turbines, which in turn power the motor generator. The electrical power which is produced is fed into the grid. After leaving the turbine, the water flows into the lower reservoir. If too much electricity is produced, the water can be pumped back from the reservoir into the higher altitude lake, from where it can be used at a later time to generate electricity. Pumped storage power stations can therefore store energy in the form of water in reservoirs. Pumped storage is a well-established method of compensating for fluctuations of supply and demand in the grid network, in an environmentally friendly and economic manner.

The scope of the ‘Linthal 2015’ project includes excavation and construction work for the underground central station of the pumped storage power station and the tunnel system for the water that provides the power. Construction of a new heavyweight dam for the higher lake will increase its storage volume from the present 9 million m³ to 25 million m³. Expansion work for the existing compensating reservoir is also included.

Construction work on Switzerland’s largest hydroelectric project is being carried out at considerably different altitudes and inside of the mountain. The compensation reservoir at an altitude of about 800m is the lowest point. One thousand metres above this is the upper reservoir Limmernboden with a capacity of 92 million m³. At an altitude of about 1,700m and some 600m inside the mountain, the heart of this gigantic expansion project is being created with huge excavated chambers that will house underground stations for the four groups of machinery used in the new pumped storage power facility Limmern.

The underground station consists of a 150m long, 30m wide machinery chamber with a maximum height of 53m, as well as a separate transformer vault which is about 130m long, 20m wide and 25m high. This central station creates the link between the two lakes via a system of upper and lower water delivery tunnels, parallel pressure shafts and other service tunnels. Personnel, materials and machines are transported to the construction site using a cable railway with a load bearing capacity of 25t.

The excavation work for the two chambers is completed. The work has been proceeding rapidly in an intensive 24/7, three-shift operation. The chambers have been excavated from above and below; every day about 800m³ of rock has been removed from the mountain and in total almost 2,445,000m³ have been excavated to form both chambers.

Industrial gear units are used in the conveyor systems which are located in the central area of the ‘Linthal 2015’ construction project. Two ‘S-conveyors’ convey 500t of material per hour over a distance of about 260m with an extreme incline of 45° and a height difference of around 180m. The excavated material is conveyed down to a crushing plant. This conveyor belt is driven by a NORD industrial gear unit with brake control, which simultaneously generates electricity. On the second conveyor belt, the crushed material is conveyed up to the gravel plant, where it is stored until it is needed for further processing as construction aggregate for the dams or as concrete for walls and ceilings. This conveyor has a belt speed of 2.2m/s and is driven by two NORD industrial gear units, located at the right and left of the conveyor system and connected by a common shaft. With a protection class of IP55, these industrial gear units each have a drive power of 250kW.

The industrial gear units for this massive construction project were developed according to the tried-and-tested UNICASE principle. The UNICASE is a one-piece housing block, into which all the bearing seats are integrated, with production carried out in a single stage using state-of-the-art CNC machines. The concept features extreme precision, rigidity and strength with no joints between the output side and the gear unit which are subject to radial forces or torque. The UNICASE principle enables a more compact design due to the staggered arrangement of the shafts and also allows the use of larger roller bearings that guarantee a long operating life. Industrial gear units can be right or left mounted.

The supplier of this complete drive solution was Getriebebau NORD, Switzerland – a member of the NORD DRIVESYSTEMS Group. Customer orientation and closeness to customers are particularly important for the drive specialists from Arnegg, near St. Gallo. Guido Eigenmann, manager of Getriebebau NORD, Switzerland explains: "We sell customer benefits – not just products. As well as this we offer a comprehensive service package. In addition to commissioning, we also provide maintenance training, so that the customer knows what to look out for. It is particularly important for us to supply complete systems which are highly efficient and economical. Many users require not just drive components, but rather complete and functioning system solutions. We tailor our drive solutions to each individual customer."

The plant constructor and customer of Getriebebau NORD is Marti Technik, which was founded in 2002. The international technology company is one of the many subsidiaries of the Swiss Marti Holding. Marti Technik is a provider of individual tailor-made solutions, principally focused on underground construction work. Building on its many years of experience gained on large construction sites and third-party projects, the company predominantly specialises in the field of tunnel boring systems, conveyor technology, switchgear construction, plant construction engineering for stone and earthworks, infrastructure systems (equipment and maintenance) as well as electrical engineering.

Ernst Kuster, head of maintenance and responsible for the conveyor systems, is very satisfied with NORD products and services. "The very good cooperation with Getriebebau NORD Switzerland is particularly positive for me. All of our requirements were catered for. What is also remarkable is the high ability to supply. It only took about ten weeks from ordering to delivery. With other suppliers, four or five months are not unusual. All-in-all we are very satisfied – a very good cost-benefit ratio, excellent advice and support, on-schedule delivery and, last-but-not-least, NORD products deliver a very high performance and are of very good quality."