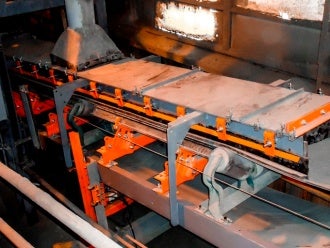 Martin Engineering was asked to submit a proposal for a significant upgrade of conveyor systems for cement manufacturer, Grupo Cementos de Chihuahua (GCC).

GCC is a global producer of cement, ready-mixed concrete, aggregates and related products. GCC Dakotah employs an extensive conveyor system to handle raw materials and to move finished product and company officials conducted an extensive assessment of the conveyors in early 2013.

It was determined that upgrades could be made on conveyor transfer points that would reduce spillage and dust emissions, so Martin Engineering was contacted.

"Dust accumulation affects both safety and productivity, so it’s really more than just a housekeeping issue. Complicating the situation is the fact that bulk handling systems frequently must accommodate changing weather and material conditions, making dust management an even bigger challenge."

Scope of the project

The conveyor upgrade involved the overhaul of six transfer points on four conveyors that were constructed in the late 1970s. All of the belts were 24in wide and ranged in length from 40ft to 110ft . During normal operation, they move 200t to 250t an hour between the storage building and the bins feeding the finish mills.

GCC maintenance manager Ralph Denoski said: "Most of the material handling system at this plant was fairly standard issue for its time, but some of the components were nearing the end of their useful life."

"We were also aware that significant advancements had been made in some areas of bulk handling, and we wanted to take advantage of the newest technologies."

GCC planned a scheduled shutdown in March, when Martin Engineering would carry out the upgrade works. In addition to supplying the components, Martin Engineering was responsible for planning and supervision of the project, while a mechanical contracting group assisted with the installation.

Three Martin® Trac-Mount™ Idlers were installed on to each conveyor. The unique idler design delivers proper belt carriage, while stabilising the belt line to improve sealing. Its slim profile requires only 8in of space for 6in idlers, and the slide-in/slide-out frames allow service without the need to raise the belt or remove adjacent idlers.

Each transfer point received a new impact cradle and two belt support cradles. Installed under the loading zone, Martin® Impact Cradles absorb the force of falling material on a transfer point and stabilise the belt line, to prevent the escape of dust and fines. Rugged impact bars are composed of a top layer of low-friction, ultra-high molecular weight (UHMW) polymer and a lower layer of energy-absorbing styrene butadiene rubber (SBR).

A pair of Martin® Slider Cradles were added to each conveyor in conjunction with the impact cradles. The cradles were installed under the skirtboard of the transfer point to support the edges of the belt and eliminate sagging and improve sealing efficiency and belt life. When the top eventually wears out, the bars can be flipped over to provide a second wear surface.

Sections of 16ft skirt board were installed on each transfer point, with new side / centre supports and covers. Each transfer point was fitted with Martin® ApronSeal™ Skirting to contain fugitive dust. This is a dual design with a primary seal clamped to the steel skirt board and a secondary seal to capture any fines or dust particles that pass beneath the primary seal.

The conveyor return sides were fitted with a Martin® Tracker™ approximately 10ft ahead of the tail pulley. The Tracker helps reduce edge damage, prevent spillage and extend belt life by ensuring continuous precision adjustment of the belts.

Finally, each belt received a Martin® QC1™ Cleaner HD and one Martin® SQC2S Cleaner. The QC1 features a polyurethane blend and tungsten carbide tip to designed to maintain consistent tension without frequent adjustment.

The entire upgrade operation was completed in 11 days, with crews working 12hr days to utilise the planned shutdown. Denoski said the difference is easily observed.

"The production team responsible for that area has had nothing but positive feedback about the upgrades," Denoski said. "We’re not losing product to spillage and dust, so that material can be sold instead of cleaned up off the floor. The manpower formerly spent on cleanup can now be directed to core business activities."

"Our experience with Martin Engineering has been very positive," Denoski concluded. "The company’s greatest strengths are its knowledge of bulk material handling problems and the best solutions for addressing them. And the no-excuses guarantee gives us the confidence of knowing that it will stand behind its products."