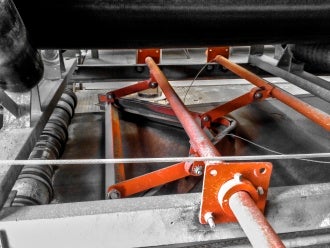 Martin Engineering has designed a family of products to provide consistent blade pressure across the belt plane, producing little wear on the splice, with specific designs for regular and heavy-duty applications, reversing belts and wing pulleys. The result is improved conveyor performance, as well as prolonged belt and tail pulley health, reducing maintenance and contributing to a safer work area.

Martin Engineering product engineer Daniel Marshall explained: "Bulk material bounces when it comes in contact with a fast moving conveyor and often shifts as it travels over carrying idlers," explained.

"These disturbances can eject small amounts of material from the belt. Occasionally along its return run, the belt will collect lumps of spilled material on the non-carrying side. If these objects are not removed they can become trapped between the tail pulley and the belt and do significant damage to both."

Marshall said that when fugitive material is drawn into the tail pulley, one of three things typically happens.

"In some cases, the belt will fail, suffering high-speed abrasion that results in physical damage to the belt," Marshall added.

"In other situations, the face of the tail pulley may be gouged and if material lumps are large and dense, the pulley can actually be forced out of round. Finally, the fugitive material itself may fail, in which case it’s extremely likely to cause belt slippage and mis-tracking."

In the unlikely event that none of these happen, without appropriate tail protection the fugitive material is simply ejected back onto the conveyor and slammed into the tail pulley repeatedly, until one of the three results occurs. Even small amounts of material can have expensive and even dangerous effects over time.

To fight the damaging effects of fugitive material on single-direction belts, the Martin® Torsion VPlow is engineered with a unique spring-loaded suspension system that allows the plow to rise and fall with fluctuations in belt tension and travel. Attached with dual steel crossbars bolted to the conveyor frame a few feet from the tail pulley, the unit is secured by two heavy-duty safety cords.

Three torsion arms system adjust independently, maintaining consistent pressure for effective cleaning in all stages of blade wear. Effective on standard tail pulleys or wing pulleys at belts speeds up to 900fpm (46m/sec), the easily replaceable blade delivers 2in (5cm) of wear and can be specified in 60 Shore A durometer nitrile rubber or heavy-duty 90 Shore A durometer urethane.

For less extreme service environments, Martin Engineering also supplies an economical solution designed for medium to heavy-duty applications: the Martin® VPlow HD, which features a durable 60 Shore A durometer nitrile rubber blade that delivers 2in (5cm) of wear life. Capable of withstanding service temperatures up to 250°F (121°C), the design is suitable for non-reversing belt speeds as high as 900fpm (4.6m/sec).

For conveyor systems running at faster speeds or carrying heavy loads, the Martin® VPlow XHD protects non-reversing standard tail pulleys even at belt speeds exceeding 1,000fpm (5.08m/sec), at service temperatures from -20°F to 160°F (-29°C to 71°C). The heavy-duty 0.5in (1.27cm) steel frame construction withstands greater impacts, resulting in durable performance over a long service life, even under the most demanding conditions. The 1.25in (3.18cm) thick urethane side blades deliver 3in (7.62cm) of wear.

Like the VPlow HD, the Martin® Durt DozerTM Plow is designed to handle standard tail pulleys or wing pulleys on single-direction belts. It sits across the belt at a 45° angle and uses its curved blade to remove fugitive material from the inside surface of belts travelling at speeds up to 700fpm (3.5m/sec). The company offers eleven different sizes to accommodate single-direction belts from 18in (45.7cm) to 96in (243.5cm) wide.

For tail protection on reversing belts, the Martin® Diagonal Plow is a straight blade design, hung from brackets on both sides of the conveyor. The device floats on the surface of the belt to remove spillage, without the need for adjustment. The durable 60 Shore A durometer nitrile rubber blade delivers 1.5in (3.8cm) of wear at service temperatures up to 250°F (121°C) and belt speeds up to 900fpm (4.6m/sec).

In addition to belt speeds and service temperatures, Marshall recommended that specifiers of tail protection products inspect the intended mounting points prior to any purchase.

"A V-shaped plow will eject material from both the left and right sides of the belt," Marshall said.

"In some locations, that can make clean-up difficult. In applications where the conveyor is up against a wall or underground, for example, a diagonal plow that sends all of the cleaned material to one side may be more beneficial."

"We designed these products to retain the pressure needed to adequately protect the tail pulley…but as with all of our component designs, they’re engineered to deliver long life and ease of service, with minimal maintenance requirements."