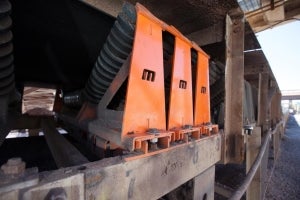 A new high-speed impact cradle has solved problems with roller and frame damage from heavy conveyor loading conditions at an Arizona mine-for-leach copper mine, where two open pits feed a crushing facility with a capacity of 103,000 metric tons per day. The customer estimates that the new cradles from Martin Engineering paid for themselves in just the first week of service, due to the savings in maintenance and downtime.

The new mine-for-leach process uses bacteria to extract copper from the ore and solvent extraction / electrowinning (SX/EW) to recover copper from the resulting leach liquor. The crushed copper ore is delivered to a single leach pad by a series of overland and portable conveyors. At a transfer point handling ¾" minus agglomerated copper ore with a 20% moisture content, a 72" belt perpendicularly feeds a 60" belt from a straight 12-foot drop.

The customer was using standard OEM impact idlers in the load zone; however, with the heavy loading conditions, maintenance personnel were forced to change an average of four to five rollers and one to two complete frames per month due to component failures. "The standard idlers simply could not withstand the heavy load and lengthy drop, costing downtime for repairs as well as the expense of replacement components," observed Martin Engineering Service Technician Doug Brown.

To address the problem, the maintenance supervisor met with Martin Engineering and asked for recommendations. Brown suggested the company’s newly-introduced High Speed Impact Cradles and installed the units shortly after. "After 7 weeks of operation, approximately 2.9 million metric tons of material have been conveyed across the load zone, and there have been zero component failures," he said.

The new cradles use Martin Engineering’s Trac-mount™ technology to slide in and out easily for maintenance. The modular components are light enough to be removed by hand, without using a crane or other equipment to handle them.
"The new rollers and frame are still in good shape, and it only takes one person to change the rollers when the time comes," said Brown. "The big problem solved is the downtime. In the past, when the customer needed to change the rollers or frame, they had to shut down the conveyor," he explained.

"The old style frame they were using was difficult to remove. Maintenance personnel had to pull the arms down, then jack up the assembly, and only then could they pull it out. So the real cost savings is in the greatly reduced maintenance and downtime."

"We wanted something that was slide-in / slide-out," added Martin Engineering Global Product Manager Chris Schmelzer. "These new cradles were designed using Finite Element Analysis, so we could confirm that they’d be strong enough, without having to overbuild them," he explained. "We can make it as strong as it needs to be, without adding excess weight, so workers can remove and replace components without using heavy lifting equipment."

The innovative load zone design uses an elastomer bar suspension system that absorbs and distributes the material load being transferred, greatly reducing the stress on the idlers’ rolling components and support structure. One patent-pending design innovation is the use of connecting brackets near the top of the idler frame to hold the three rollers together. These connector brackets are designed to allow multiple modular cradles to be tied together, so that the idlers throughout the entire load zone work together as a system.

"As a service technician, part of my job is helping the customer find the equipment that saves the company the most money," Brown concluded. "This cradle is simple to install, and the easy access to the center roller makes the maintenance a one-person job. In addition to greater durability, it’s intentionally designed to facilitate service, making the task of changing rollers safer and easier."